By far the least expensive Sanyo projector available but is the PLV-Z2000 3-Chip LCD front projector any good? Home Theater Review.com weighs in on when is it time to save versus spend when it comes to high definition front projectors.

The imminent domination of 1080P projectors over the 2007-2008 model year has produced a wealth of different products at various price points. Sanyo has created their PLV-Z2000 as an entry-level product, with few frills, to make owning a full 1080p projection solution very simple and absolutely affordable.

The three-chip organic full 1080p LCD engine offers better performance and a much sharper image for the same money as one of the 720p projectors the company made just a few years ago. The small 16.1-pound, brick-shaped PLV-Z2000 comes in either a black or white case color, offers both horizontal and vertical lens offset and has the exhaust vents on the right side of the projector, making it extremely easy and painless to set up, and even cart along for the ride to a friend’s home or on vacation. This is Sanyo’s first-generation of three-chip 1080p light engine (2.07 megapixels), and this one is able to drum out 1,200 ANSI lumens and a (reported) 15,000:1 contrast ratio onto screens ranging from 40 inches up to 300 inches. The motorized lens offers 2:1 zoom and focus with very few chromatic aberrations for a sharp and tight image. The expected bulb life is a standard 2,500 hours, and as UHP bulbs go, it is a bit on the cool-looking side, but otherwise adequate.

A wealth of subtle details can be seen from any source, thanks to 14-bit processing, but there is no contrast-enhancing iris of any sort, so blacks can appear a little bit on the gray side on smaller screens. The availability of XYZ (xvYCC) extends color space, and Rec. 709 and Rec. 601 automatic memories reproduce HD and SD sources correctly and repeatedly. The input options include two HDMI 1.3 jacks, two component video, RGB on D-sub HD 15-pin (for your computer or laptop), S-video jack and a composite input on an RCA jack. The projector can accept signals from 480i up to 1080p at 24, 30, 50 and 60 fps. Sanyo offers a three-year warrantee, and is entry-level-priced at $2,495 MSRP.

Let us consider what it takes to produce an image worthy of being called full 1080p HD. There is resolution, and this projector delivers all pixels of every input type just as they are supposed to be. Unlike several projectors in this price range, the Sanyo does not lose any high-frequency information, except when using its component video inputs, and then only slightly. Installation and set-up are simple, whether on a bookshelf or tabletop or using a ceiling mount. The liberal horizontal (+/- 100 percent) and vertical (+/- 30 percent) lens offset allows for a square picture from a wide variety of locations. There is also light level which, with the included 1,200 ASNI lumen bulb, can create large images from 40 inches up to 300 inches (I used a 100-inch diagonal Stewart StudioTek 130, for example) to create light levels approaching those of commercial cinemas (about 16.5 foot-lamberts). A three-year warrantee gives you as the customer some security and satisfaction that Sanyo is not just building expensive paperweights. The ultra-quiet exhaust system, thoughtfully included on the right side of the projector, is quiet enough not to be noticeable, even in a small room. Add to this reasonably accurate colors and good but not stunning black levels, and you have yourself a real bargain.

Your time watching movies, television, video games and such is important and deserves a great picture. With a 1080p HD projector like the Sanyo PLV-Z2000, you really can begin to immerse yourself in the program material. In a theater with controlled lighting, this 1,200 ANSI lumen piece generates a substantially better and brighter image than its 720p parents. One need only put on an episode of Lost from a Blu-ray disc (1080p) and compare it to what is seen on ABC-TV (720p). The difference is striking. Not only is everything much, much sharper, but also the color quality is noticeably more realistic and three-dimensional. Calibration of the Sanyo produces an even finer result, but not as good as it could be if there were more controls for gamma and color temperature adjustment. Essentially, though, the PLV-Z2000 is Sanyo’s first-generation attempt at full 1080p HD. They have learned from the volume of such projectors being manufactured by others and created a well-thought-out and easy to use front projector, which makes it that much easier to enjoy. Plug and play is the name of the game. You get a great value and more from this highly portable projector.

Read about the high points and the low points of the PLV-Z2000 on Page 2. 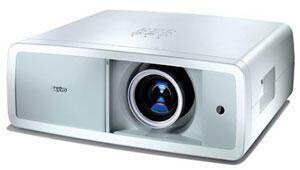 Low Points
• Color primaries are a bit off, with both red and green being more deeply saturated than they are supposed to be.
• Once everything is connected to all inputs, there is very little room to maneuver.
• The contrast ratio is nowhere near 15,000:1; it’s closer to 3,000:1, according to my in-home measurements. Note: embellishing contrast ratios has become a high-level game of statistical trickery that has sucked in many. This is why HomeTheaterReview.com notes all manufacturer contrast ratios as “reported,” thereby allowing the user to count them as a comparative tool at best when making a projector decision.
• Should you wish to calibrate the projector for maximum accuracy, you will find a minimum of user calibration controls and only a few service menu items that do not allow for much additional adjustment.

Conclusion
How do you know when you’re enjoying a movie or television program? When you’re not fiddling with the projector or remote control. With the Sanyo PLV-Z2000, you can just take it out of the box, hook up your sources, and off you go to the movies. It is very easy to use, particularly thanks to a backlit remote control, which you’ll likely only use to change inputs or channels. It can fill both small and large screens and generates substantially colorful and detailed images that leave 720P in the dust. Given 1080p sources such as Blu-Ray and HD DVD, some newer video games and surfing the Internet can all be so much more enjoyable then ever before, and for a bargain price.