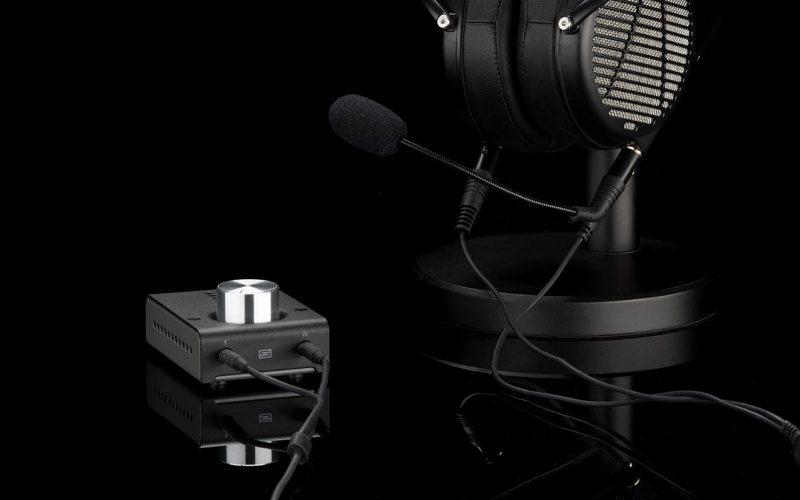 As I write this, it's been about three weeks since my wife finally got approval to work from home during our current stay-at-home order. And it took all of three days for us to start driving each other batshit insane.... 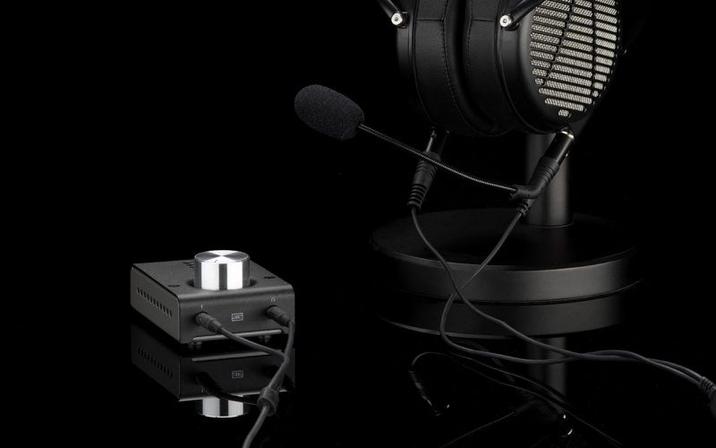 As I write this, it's been about three weeks since my wife finally got approval to work from home during our current stay-at-home order. And it took all of three days for us to start driving each other batshit insane. I can't run room correction sweeps when she's on a conference call, and she can't work the teller services lines when I'm cranking The Last Jedi at THX reference levels in next room over. Our home/work lives have evolved into a never-ending game of "Am I allowed to make noise now?"

So when Schiit asked me if I'd like to put a couple of its Gaming DAC/Amps to the test, I'm not going to lie to you, dear reader: I jumped at the opportunity for some in-home social distancing. The Fulla 3 is the less-expensive of the company's two headphone amps marketed mostly at gamers and also at home office users, selling for $99 via the Schiit website plus $12.48 to $38.56 shipping, or via Amazon. If you're familiar with the company's lineup, it is of course an evolution of the old Fulla 2, just with the addition of a 3.5mm microphone input and the removal of the fixed DAC output. But if you're unfamiliar with the Fulla 2, it's worth exploring what this little headphone amp/DAC actually is in its own right.

The Fulla 3 is a wee spit of a thing, measuring 3.5 inches long by 2.5 wide by 1.375 inches tall (if you include the height of the volume knob). In addition to its 3.5mm microphone input and headphone output, it features a 3.5mm TRS stereo preamp output, a 3.5mm TSR stereo analog input, and two USB ports. One of the latter is for USB 2.0 audio input for your computer, laptop, or even gaming console if it supports such; and the other is an optional port for power only, just in case your main USB output isn't providing enough juice. (Schiit doesn't include an extra USB cable or wall-wart for such contingencies, just so you're aware. You'll have to buy those yourself.) Setup, at least when used with a Windows 10 machine, is simple and straightforward, since the Fulla 3 requires no drivers (although drivers are available if your machine doesn't support UAC2).

In my current media PC setup, I have a USB output running to my two-channel system over on the other side of the room, but for gaming and system sounds, I use a pair of SVS Prime Wireless speakers, connected optically. I have for a few years now relied on a Sound Blaster E5 DAC and Headphone Amp to drive a wide variety of gaming headsets.

Slotting the Schiit Fulla 3 into that system, I chose to run the preamp output of the DAC into the aux input of the Prime Wireless speakers, mostly as to way to test the output switching capabilities of the Fulla 3 (in other words, would plugging in a headset in the front override the preamp output on the back? Indeed, it did). There was a surprising benefit of going with this configuration. My Prime Wireless speakers are just out of arm's reach on my desk, and controlling their volume generally means either using an app or my computer's built in volume control slider. Having the Fulla 3 right at my fingertips meant that I could more easily tweak the loudness level of my desktop audio system even when I wasn't gaming, via the nice little volume knob that not only feels good to the fingers (perhaps a little less smooth than I would prefer, but seriously nice for a $99-ish device), but also draws slight attention to itself in my peripheral vision due to its visual contrast with the body of the unit itself, so I never had to put too much conscious thought into tweaking my levels when I was working (or gaming).

Another thing I like is Schiit's typical cheekiness. In the playback device selection menu on Windows 10, the DAC identifies itself as "I'm Fulla Schiit," which never fails to make me chuckle.

Performance
For the bulk of my testing, I relied on a handful of gaming headsets that tend to be in my go-to pile. My all-around favorite is the HyperX Cloud, although with certain games I'm also just as likely to grab my Sennheiser G4me One open-back headset. I also tested it out with my beyerdynamic Custom One Pro Plus with Custom Headset Gear (perhaps an unfair test, for reasons I'll dig into in a bit), along with Sennheiser's newer GSP 600. And yes, I realize I have a lot of gaming headsets. I used to review them for another publication. But that's neither here nor there.

I started my testing – at least with games – by way of a few multiplayer rounds of Civilization VI. As I generally do with this game, I relied on my Sennheiser G4me One headset, whose open-back design is a good pairing for the game's gorgeous soundtrack, especially the music for the Swedish civilization, which I tried out for the first time in this game.

Selecting Kristina as a leader unlocks a wonderfully playful fiddle- and woodwind-heavy score that sounded positively delightful through the Fulla 3/G4me One combo. There was a wonderful airiness to the entire experience that was in most respect the equal of or an improvement on my Sound Blaster E5, with but one exception. I typically prefer to put the E5 into High Gain mode with the G4me One, and no such option is available with the Fulla 3, so I found myself having to push the volume knob pretty much all the way clockwise to get enough output.

This was even truer when I switch over to DOOM Eternal. I had to push the volume to the max to get the sort of bone-crunching sound I was looking for. A switch to my HyperX Cloud headset allowed me to ease off the volume a little, and overall deliver a much more gut-punchingly satisfying demon-killing experience.

The Fulla 3 puts a good bit of emphasis on the upper frequencies, so the cocking of shotguns and the crashing of walls and the ger-sploosh of blood punches and glory kills really gained some visceral impact through the amp. And a switch to the HyperX Cloud Alpha upped the impact even more (the Alpha in particular being one of the few gaming headsets I have that's so easy to drive, even the headset output of the PS4's DualShock 4 controller can make it sit up and holler).

I swapped out my gaming headsets for my Westone ES50 custom IEMs and cued up some of my regular playlists. At random, George Michael's "Freedom '90" came up first in the rotation, which is fortunate because it's a track I know perhaps better than any other pop song. I was impressed by the clarity delivered by the Fulla 3, and found its performance to be better than expected for a $99 headphone amp. Was it the last word in channel separation and imaging? Not quite. Did it stand toe-to-toe with much pricier HPAs in terms of detail and dynamics? Not exactly. Did the piano have that Nth degree of clarity in the mix that I look for in top-shelf products? Not so much. But I really liked the punch of the percussion, Michael's voice sounded spot on, and when factoring in the unit's price, I found it to be a perfectly satisfying listening experience.

The one thing I did notice with the much-more-sensitive Westones that I didn't hear with any other cans is a very slight amount of pot noise coming from the analog volume control. But it was drowned out by music playing at any listening level, so this wasn't a significant concern.

Competition and Comparisons
If you have a relatively easy-to-drive gaming headset or pair of headphones for use with your gaming rig, chances are good you might not necessarily need to spend more than the Schiit Fulla 3 costs. If, on the other hand, you've got a hard-to-drive headset or headphones and need some extra oomph, especially for more action-oriented games, I would point you in the direction of the $189 Schiit Hel High-Powered Gaming DAC/Headphone Amp (review coming soon). Not only does the Hel have switchable high- and low-gain modes, making it more versatile with a wider variety of personal sound solutions, it also has a lot more power (1200mW into 16 ohms vs. 400mW, and 200mW into 300 ohms vs. 40mW). The Hel also has input selection, a separate volume knob for the mic input, and a quarter-inch headphone jack for use with your beefier audiophile cans.

For around the same price as the Fulla 3, you can also pick up the Creative Sound BlasterX G5, which offers a few bonus goodies like surround sound processing and other sound enhancements, including switchable high- and low-gain modes. Truth be told, though, I'm not impressed by Creative's faux surround, and I find its firmware and software issues to be bit of a deal-breaker. I also prefer the Schiit Fulla 3 from an ergonomics perspective, especially having the volume knob up top and more easily accessible.

Conclusion
If you have a relatively easy-to-drive gaming headset or a headphone/mic combo setup that needs more oomph than your motherboard can deliver, but you want to spend as little as possible on a meaningful upgrade, the Schiit Fulla 3 is a compelling little overachiever that deserves your attention. Add preamp capabilities – in other word, the ability to drive powered monitors and provide at-your-fingertips volume control - – and it would be hard to argue that this isn't one hell of a value. True, isn't an incredibly simple sound solution that lacks many of the features found on other gaming DAC/headphone amps, but that's part of the appeal.

Quite frankly, if not for Schiit's Hel High-Powered Gaming DAC/Headphone Amp, which has a handful of features that speak to my specific needs and an appreciable step up in performance, I wouldn't hesitate to drop $100-ish on the Fulla 3 to handle all of my desktop audio needs.

Additional Resources
• Visit the Schiit website for more product information.
• Read What the AV Industry Could Learn from a Silly Bedding Company at HomeTheaterReview.com.