While Sennheiser has a long and well-earned pedigree, which the HD 428 over the ear headphones are now part of. However, given the performance and price point, the HD 428 will be facing some stiff competition. 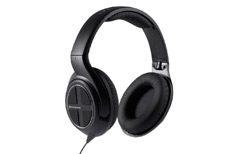 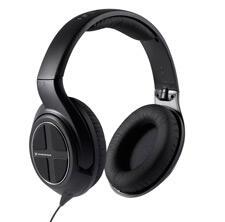 The HD 428 has an understated appearance clad in smooth black plastics, and soft touch rubber with taut but plush padding along the headband and ear cups. At a little over 13 ounces the HD 428 is lightweight enough to be worn for extended periods of time. The HD 428 has a reported frequency response of 18 to 22,000Hz with an impedance of 32 Ohms. Sennheiser states the HD 428 is capable of sound pressure levels up to 110dB, which is plenty of output for an over-the-ear design aimed at keeping ambient sound out and your favorite music in. The HD 428 comes equipped with a 10-foot single-sided cable with a three and a half millimeter connector at its end. A quarter inch adaptor is also included. The HD 428 is optimized for use with many Apple devices such as iPods, iPads and iPhones as well as other portable devices.

In terms of sound I utilized the HD 428 in conjunction with my iPhone 4 for the duration of this review for I see the typical HD 428 consumer being someone looking for a moderately price alternative to Apple’s included ear bud headphones – for which the HD 428 is well suited. The HD 428’s sound quality was good, very dynamic and lithe with solid but not excessive bass. I would classify the HD 428’s voice as mildly lean versus overly lush or dampened as is the case with some other over-the-ear headphones I’ve encountered recently. In return the HD 428’s sound is nuanced and airy which can sound a bit thin and/or brittle at higher volumes. The HD 428 fit comfortably around the ears but the fit isn’t what I would classify as snug, which means they’re not ideal in blocking out ambient noise. However, if you’re one to listen to music in a quiet environment, the HD 428’s lack of complete isolation isn’t going to be that big of a deal. For the most important factor (other than sound quality) – long term comfort – the HD 428’s shine, for their ear cups are well padded and its lightweight make them easy to forget when wearing.

Read about the high points and low points of the HD 428 headphones on Page 2.

High Points
• The HD 428 is a stylish but understated headphone that features well-sourced plastics and soft touch rubber.
• The HD 428 is comfortable to wear for long periods of time.
• The HD 428’s sound is natural though it skews to the leaner side of neutral, which makes for a lively, focused and nuanced performance, though those looking for richness and deep, impactful bass will be left wanting.

Low Points
• The HD 428 doesn’t rest securely around all ears meaning its sound isolation capabilities are not ideal, which may or may not be a deal breaker.
• At the extremes or at extreme volumes the HD 428’s sonic performance does become a bit one dimensional and at times harsh.

Competition and Comparisons
Hundred dollar headphones seem to grow on trees nowadays and there are numerous offerings that compete favorably with the Sennheiser HD 428 headphones. One such competitor would have to Klipsch’s Image ONE headphones, which at $149.99 are comparably priced and feature a similar sound to that of the HD 428 – though I’d say the Image ONE’s are better in terms of their overall sound quality. Another option would be Skullcandy’s Roc Nation Aviator headphones, which retail for $149.99. The Roc Nations are surprising performers, especially considering Skullycandy’s reputation for style over substance – still, they’re worth mentioning in the same sentence as an audiophile brand such as Sennheiser.

Conclusion
It’s hard to argue with a $100 over-the-ear headphone with a Sennheiser pedigree – for which the HD 428 has both. However I’m not sure the HD 428 gets my blanket endorsement for while I liked many aspects of its performance, it does face some stiff competition at and around its asking price. Still, there is a lot to like about the HD 428’s performance, mainly its open, agile sound that is involving and dynamic, though if you push them too hard they can become thin and one dimensional – but that’s not an issue unique to the HD 428. The HD 428 is worth an audition but so are a lot of other $100 headphones.