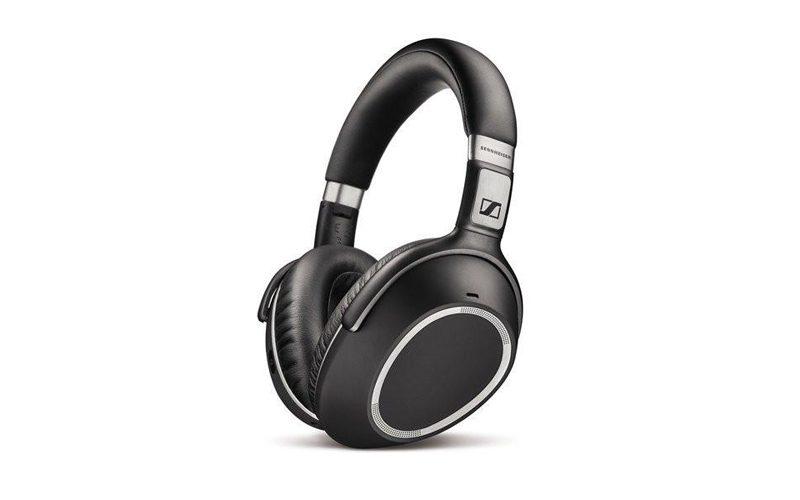 Sennheiser is a privately held manufacturer of a wide range of high-fidelity products, such as microphones, headphones, and translation/assistive listening systems for personal, business, and aviation applications. The company has been, and continues to be, an innovator in many areas,... 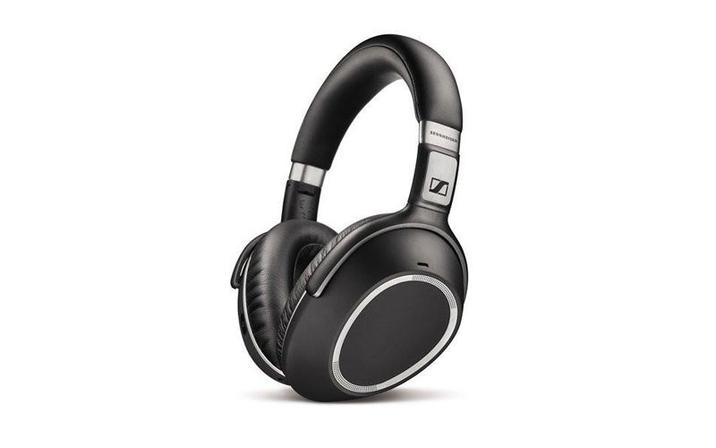 Sennheiser is a privately held manufacturer of a wide range of high-fidelity products, such as microphones, headphones, and translation/assistive listening systems for personal, business, and aviation applications. The company has been, and continues to be, an innovator in many areas, including the high-end wireless transmission of audio, noise-canceling technologies, and the recent Ambio virtual recording microphone system.

What does any of that have to do with the PXC 550 headphones? A lot, as it turns out. The PXC 550 ($399.95) has an incredible array of features and benefits, many of which draw directly on the decades of experience that Sennheiser brings to the party (even if the party is 35,000 feet in the air). The PXC 550 shines in many use cases, and flying is certainly one of them--by virtue of its adaptive noise-canceling and collapsible attributes. Full disclosure: I worked directly for Sennheiser USA for over 12 years. However, I moved on in 2004, and I can assure you that there are no ulterior influences except to say this is indeed a great company with great people who passionately care about what they do.

Features
The PXC 550 over-the-ear headphones feature both adaptive noise cancellation and Bluetooth 4.2 connectivity. This is a full-sized, circumaural design--that is, the headphones fully enclose your ears to provide a degree of passive noise reduction. Although there are a lot of pieces inside these headphones--including a battery, a four-microphone array for noise-canceling, a three-mic beam-forming array for speech (talking on a phone call), a transducer in each cup, and controls for wired and wireless connectivity--they weigh only eight ounces, and I found them to be comfortable. The collapsible design is great for transporting your PXC 550 in the included carry case; plus, when you turn the ear cups toward you, the headphones automatically turn off, and a pleasant female voice announces, "Power off." Turning the ear cups back to the wearable position prompts her to say, "Power on. Phone 1 connected." This preserves battery life, which is already listed at a very respectable 30 hours with NoiseGard engaged. The headphones charge via the included USB cable. If you run out of battery power, there is an included eighth-inch cable with an in-line microphone and controls that allow the music to continue playing, but without the NoiseGard feature.

What is NoiseGard adaptive noise-canceling? The wearer can set the NoiseGard switch on the headset to Adaptive Mode to adjust the NoiseGard strength via the free companion app called CapTune. NoiseGard works so well, why ever adjust this? Well, decreasing the NoiseGard strength allows more of the outside world in when you desire it--for example, when your flight is about to land, and the flight attendant or pilot makes an announcement. This is a great feature.

The Bluetooth connectivity is also extremely well implemented. After the easy first pairing, subsequent connections were effortless and quick, and I found the range to be excellent. A button on the right ear cup cycles through various sound effect modes: Club, Movie, Speech and Off. For music listening, I preferred the effect to be left off. While watching movies, the Movie effect brought the dialogue forward yet still provided plenty of spatial localization and thump for explosions and such. I tried the Speech mode while taking and making calls, but for me the results, while slightly better, did not warrant pushing the button--which can be a bit difficult to locate while you're wearing the headphones. Sennheiser might consider making this an automatic switch whenever a call is in progress.

In addition to the physical buttons (Bluetooth on/off, Effect Mode, and ANC), touch controls are employed to allow for the following functions: play/pause, volume up/down, next track, previous track, skip forward/skip back (within a track), accept/reject calls, hold/end, mute, and TalkThrough. When TalkThrough is activated, professional-quality microphones mounted on the outside of the headphones pick up acoustic signals in the immediate vicinity, allowing the voice of the other person to pass through the headphones. All these touch controls are activated by tapping or swiping either the left or right ear cup. This may sound confusing, but Sennheiser did a great job with the interface: once you use these controls a bit, you quickly get the hang of it.

I mentioned the companion app, CapTune, as a means of adjusting the adaptive NoiseGard noise-canceling feature, but it can do so much more. CapTune is a music and device customization app designed to optimize the performance of the PXC 550 headphones. Through CapTune, you can change the sound mode to put emphasis on speech or music clarity, or to further improve your call experience, among other things.

Listening Sessions
The PXC 550 headphones have a listed frequency response of 17 to 23,000 Hz. That is audiophile territory, and indeed they sounded great, with excellent soundstage depth and clarity. I watched a few movies and listened to music for hours, and a few reference movies and audio tracks stood out as both a challenge to the resolution of these headphones and as a means to test their "enjoyability" factor.

You want explosions? Planes with propellers? Wonder Woman delivers, and the PXC 550 headphones handled it all very well. With ANC on and off (and somewhere in between, thanks to the CapTune app), even at 35,000 feet the soundtrack's impact and the sense of complete immersion remained intact. I chose The Big Sick for its quiet dialogue, as well as scenes that combine traffic noise, dialogue, and background music all at the same time. The PXC 550 did a great job keeping me right next to the actors, in terms of dialogue intelligibility. Well done! Finally, I watched the original 1982 version of Blade Runner in anticipation of going to see the new release. The Vangelis score is thick with ethereal synthesizer washes as Harrison Ford narrates over the top here and there. Listening to this film through the PXC 550 headphones was a revelation in detail.

Now on to music ... In "Let Me Down Easy" by Paolo Nutini from the Caustic Love album, these headphones created lots of space in between the vocals and instruments, which is a good place to find flaws in the ANC. Thankfully I heard none. No hiss. No breathing. Just glorious silence. If you want to test the quality of the noise cancellation in any headset, this is a great track to do so.

"Portraits of Cuba" by Paquito D'Rivera from the album of the same name features great percussion and well-recorded horns. The PXC 550 reproduced it all with great detail and absolutely no harshness in the high frequencies.

The EDM track "Aimin' at Your Head" by Pretty Lights from Filling up the City Skies showed how the PXC 550 can give you the gut-punch bass while keeping it together in the mids and highs.

In each of the above tests, these headphones handled everything thrown at them superbly. No, not to the same level as the $4,000 Focal Utopias, but for $400 and considering all the extra mobility features, Sennheiser has a winner on its hands ... or better yet, on your head. High Points
• The PXC 550 has every feature you could possibly want in a headphone designed for mobile use - and they're implemented extremely well.
• These headphones deliver excellent sound quality that approaches audiophile standards.
• Feature accessibility is intuitive, and connectivity is a breeze.

Low Points
• The buttons can be hard to find, as they are nearly flush with the casing. Plus, the minimal labeling is black on black, making it hard to know what each button does.
• The Quick Guide that comes in the box is poorly written and hard to understand; however, the online owner's manual is excellent.
• The aesthetics are nothing special. It's basically black with a bit of silver. I'm not suggesting anything garish, but a little understated color (maybe some earth tones) would suit the luxury status that the sound and features warrant.

Comparison and Competition
The Studio3 Wireless headphones ($349.95) from Beats feature Pure Adaptive Noise Canceling, which Beats describes as an automatic system constantly using real-time calibration to optimize sound output. I went to the Apple store and tried them out. There certainly was plenty of background noise to attenuate. The Studio3 quashed plenty in the 400-Hz to 1-kHz range, and as I walked about the store (with the ever-attentive Apple Security guy watching me!), it did in fact seem to change a bit. It sounded to me as though the Beats headphones sacrifice sound quality for the automatic functionality--a compromise I would not choose and one that the PXC 550 doesn't make.

The Bose QuietComfort 35 Wireless Headphones II ($349.95) have Google Assistant built in. When you are not staring at your phone, being told the answer to what you asked is a clear advantage, so building this into a pair of headphones makes sense. However, if you don't have an Android smartphone or you are watching a movie or temporarily without Wi-Fi connectivity (on a plane, for example), this feature becomes a non-factor. The QuietComfort 35 headphones also have adjustable noise cancellation with three selectable levels (the PXC 550 has nine, all in percentage gradations: 0, 12, 25, 37, 50, 62, 75, 87 and 100). There is a Bose store near me, so I went and tested these. They let me walk around even outside the store where traffic noise was present, and I listened to music, watched a minute of a movie on my smartphone, and even made a phone call. Everything works and works well, but I preferred the PXC 550 in every regard. The QuietComfort 35 offers Volume Optimized EQ, which adjusts the sonic frequencies depending on how loud you are listening--sort of like the loudness control for adding bass when listening at low volumes, but I heard some negative effects even at higher volumes. This is yet another automatic system that is, at best, a compromise--and unfortunately you cannot turn it off. The headphones are not collapsible, and the battery is listed at 20 hours of battery life, compared to 30 for the Sennheiser headphones.

Sony's MDR-1000X ($248) also has adjustable noise cancellation. I felt that, to get the ANC to a level where the outside noise was fully attenuated, the sound quality was negatively impacted. So I backed off the ANC until the music sounded better, but then there was too much traffic noise (in my test). I had the PXC 550 with me and did a direct comparison. Sennheiser's ANC worked so much better, I could have ended the comparison then and there; but, to be fair, the rest of the Sony features are well designed and work nicely. If you can't do a direct comparison, you might never know what you were missing. Both the Bose and the Sennheiser ANC systems work better; given that ANC is such a powerful feature for mobile use, it's worth it to move up $100 to $150 to get better performance.

Conclusion
If I liked the Bose headphones better, I promise you I would say so. They were close--I would rank the QuietComfort 35 II headphones as a strong second-place contender. Overall, though, I found that the PXC 550's added features and the wonderful execution of all those features elevated these headphones to a higher level. The PXC 550 is my clear choice if you're shopping for a pair of noise-canceling wireless headphones in this price range.