Shanling Audio's 1500 CD player demonstrates how far Chinese manufacturers have come in design and execution in the last couple of years. Audacious in looks and technology, the 1500 makes a strong statement about Asian audio aesthetics and sound 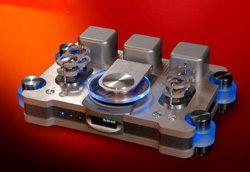 If it's possible to love something for the wrong reasons, well, so be it: the very instant I took the top layer of packaging off the Shanling's CD-T1500 valve CD player, I fell in love with it. Then again, I've been a sucker for Shanling's oddball designs ever since I first laid eyes on them.

While most Chinese manufacturers either played it safe with conservative styling, or merely copied existing successes from the USA, Italy, et al, Shanling was among those that presented a new face, a new look, a new language, so to speak. Blue-lit feet, beautifully CNC-machined top-loading hardware, whacky layouts for their valve amps - Shanling pieces repeatedly give me the same visual thrill I experienced the first time I saw an Oracle turntable.

Mercifully, the products seemed to sound as good as they looked. Global response to Shanling has been totally favorable, and not just because of the styling: their products showed that Chinese manufacturers could compete at the high end.

Although hardly high-priced by today's standards, £2000/$4000 for a Chinese-made CD still strikes some as excessive. But once you examine this machine up close, it's truly a thing of beauty. Compact, elegant, rich with interesting details, it almost makes me forget my preference for front-loaders.

At the back, there are superb connectors for both balanced (XLR) and single-ended outputs, co-axial digital output and an IEC mains socket. The latter is, of course, good for tweakers who like to play with AC cables, but Shanling is one of few manufacturers to provide a high-grade mains cable as standard.

Three cans across the back house the transformers. The center of the top plate is filled with the substantial hinged disc cover and disc aperture, flanked by pairs of Electro-Harmonix 6922 valves. Transport buttons line up in front of the valves, while an on-off rocker nestles on the right side panel. At the front are a numeric display, the receptor for the full-function remote's signal and the indicator for 24/96kHz up-sampling. Although this is the default position, you can switch it off. Which you'll only do once, as it's definitely preferable: smoother, more coherent.

Like Musical Fidelity, T+A and a couple of others, Shanling likes light shows, so  this baby glows blue from the disc lid and the four cylinders that support it. I swear: I'd buy one of these just as a piece of sculpture.

Only three decisions need to be made before connecting the Shanling to one's system: where to house it, whether to use single-ended or balanced outputs if your pre-amp allows and which cables work best for you. I used a shelf on my Mana Acoustics rack, and opted for balanced after a quick burst of unbalanced. There is no contest. Cables? Hi-Diamond's XLR+ Reference worked a treat into the McIntosh C2200, feeding the McIntosh MC2102. Speakers? Mainly Sonus faber Guarneri.

As is my wont, I let the Shanling run in repeat mode overnight before listening to it. I know, such willpower seems unlikely, but that's the way I've disciplined myself with valves. And it's a good thing, too, because the valves in this player caused a lot of head scratching.

As with its mother country's choice of weapons during the Cold War, this Chinese manufacturer turned to the Russians for glassware. Electro-Harmonix's Russian-made 6922s have a good reputation, but the ones fitted to this particular unit seemed to vary from channel to channel. Sure enough, I fed the player a mono CD and swings of the balance control from extreme left to right indicated minor but audible differences. (Obviously, the channel differences in a stereo CD's signal would not allow a listener to identify this condition.)

It's not my place to make apologies for components under review, so I would posit the need for tighter controls back at the factory when selecting tubes. I dug into my spares and pulled out a quartet of matched mil-spec 6922s, which upped the sound considerably. This could be said of plenty of valve products. In other words, the CD-T1500 remained pretty damned good straight out of the box.

Once settled in, the Shanling reminded me of the early California Audio Labs players, but with marginally better transparency and no loss of warmth. I kicked off the sessions with Marianne Faithfull's exquisite "Trouble in Mind" from A Perfect Stranger: The Island Anthology. By this time in her career, the voice was worn and scratchy, the perfect instrument for purveying the louche and decadent. Having once had the good fortune to meet her in person and thus marveled at the textures of her voice face to face, it was a pleasure to hear them reproduced with such veracity.

Better still was the sound of the trumpet that punctuated the recording. Faithfull's vocal took center stage, full and round like a well-aged Barolo, the instruments hovering around and behind her. That trumpet pierced a carpet of sound like a sharp blade, taut yet airy and contrasting with delicate, tinkling keyboards. It was a complex yet gentle aural painting, and the Shanling cradled it with affection, perfectly appropriate for one of the most aching of all the great blues ballads. (Note to the blues purists among you: Stop the snickering. Faithfull's version ranks with the best.)

Paul Jones was/is another favorite singer I was blessed to meet in person. His voice, like Faithfull's, possesses a trace of wear, not as raspy as Rod Stewart, yet hardly destined to join the castrati. EMI recently delivered a 4CD collection, Down the Road Apiece, with Manfred Mann's entire 1963-1966 output, fronted mostly by Jones. I first heard their eerie take of the mono-only "John Hardy" as the B-side of a US single over 40 years ago and it's stuck with me ever since.

Shanling allowed every single instrument to stand proud in the mix, militaristic drumming at the back, Jones front and center, with his harp playing enjoying the same presence as the trumpet in the Faithfull track. Bass? Rolling and rich. But the most delightful surprise, and good reason to rank Jones as one of the UK's most underrated stylists, was the devastatingly soulful take of "You Don't Know Me," replete with some of the most subtle and apt keyboard playing from Mann himself, precisely what you want augmenting such a classic track.

By this point, I was in a quandary. The Shanling clearly respected vocals, air and space, transient attack and bass extension, but something was nagging at me. Hard to pin down. I was thinking, "Maybe a bit less transparent than the Musical Fidelity kW DM25? Slightly less dynamic than the Marantz CD12? Marginally less coherent than the Quad 99 CDP II?"

Sparse recordings should have made this apparent, especially the leaner tracks from the Faithfull collection, but it was something from the other end of the spectrum. The recently re-mastered Wizzard Brew, from that sadly-neglected pop genius Roy Wood, features stuff most people regard as throwaway Radio 1 fodder of yore. But Wood, the closest the UK has come to producing its own version of Brian Wilson or Phil Spector (sans gun), always filled his biggest works with as much detail as Bosch or Richard Dadd.

Read Much More on Page 2Moving from player to player to player with the epic "See My Baby Jive" revealed instruments - from bells to triangles to keyboard fillips - obscured by varying degrees. The segue from motorcycle exhaust to drums, percussion buried in the mix - the Shanling equaled but couldn't better the Quad 99 CDP II at around half the price. The cash register opening "I Wish It Could Be Christmas Every Day" exhibited varying degrees of realism, from the tinkling of the change to the slam. But it still possessed something I had to put my finger on, something still eluding me after two days of solid listening.

When in doubt, turn to the gods. Sam & Dave earn no less than three tracks on the astounding two-CD set, Stax 50th Anniversary Celebration. Check out the tambourine that opens "You Don't Know Like I Know." This is not an exotic, unfamiliar sound, especially to those who wore  thighs bruised and red trying to emulate Mick Jagger in their early teens. Despite the mono mix, via the finest systems, it sounds in the room suitably taut and dry, with the mini-cymbals rattling and decaying just so. A shade of muffling affected this most basic of percussive tools with the Shanling, while the MF was so crisp and authentic that my upper leg hurt in sympathy. So that was it: a minor haze, a miniscule lack of clarity.

If it seems like the Shanling is confusing me, then the predicament is not unlike that facing the driver who lusts after a Morgan, or the photographer who covets an Alpa. Both are iconoclastic if not downright ornery, yet exceptional in their own ways, with unique points unobtainable and immune to substitutes. So, too, is the Shanling.

Like office party sex, you know you shouldn't, but often can't resist. The Shanling's odd valve matching and so-so retrieval of low-level detail should cause one to stop and take stock. But then, like a dumb but beautiful blonde, it simply seduces. The CD-T1500 sounds better than it should, works faultlessly and looks sensational. I'd buy one in a heartbeat.