Sharp introduced two models of Blu-ray players last year. The top tier of the two was the BD-AMS20U, reviewed and put to the test here by HomeTheaterReview.com writer Adrienne Maxwell. 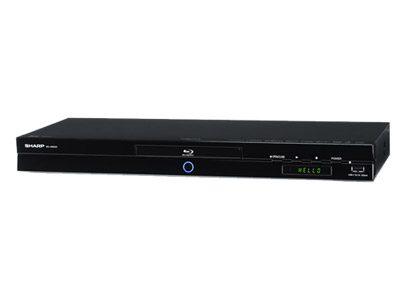 Sharp introduced two Blu-ray players last year: the BD-AMS10U and step-up BD-AMS20U. The company did not announce new players at CES 2013, and the 10U is not available through many outlets, leaving the 20U as the principal player in Sharp's lineup. Features on the 20U include an HDMI input with MHL support, a supplied USB WiFi dongle for wireless network connectivity, 3D capability, and the inclusion of Sharp's SmartCentral Web platform, with access to Netflix, VUDU (with Apps), and YouTube. DLNA media streaming is also available.

The BD-AMS20U has a basic black-box design with a pop-out disc tray; its form factor isn't as compact as other new players on the shelves, but it's still non-intrusive. The connection panel includes one HDMI output and one optical digital audio output; the player does not have any analog A/V outputs, nor does it offer the second HDMI output found on some higher-end 3D models (which is desirable when trying to mate a 3D player with an older, non-3D-ready A/V receiver). The player has onboard Dolby TrueHD and DTS-HD Master Audio decoding, and it also passes these high-resolution audio formats in their native bitstream form over HDMI, for your A/V receiver to decode. The connection panel includes an Ethernet port for a wired network connection, as well as two USB ports: one supports the addition of the supplied USB WiFi dongle, and both support the addition of a USB flash drive for BD-Live storage (there's no internal storage) and media playback.

As I mentioned, this product also has an HDMI input, but it's not designed to accept every type of HDMI source. For instance, you can't connect a cable box or gaming console in order to pass the signal through to the display. This input is specifically designed to connect MHL-compatible mobile devices. MHL (or Mobile High-Definition Link) allows you to play back high-def video and high-resolution audio stored on a smartphone or tablet; the MHL port will charge your mobile device while it's connected. Sharp chose not to incorporate another possible MHL feature - that is, the ability to control your mobile device using the Sharp remote during playback. I didn't have a compatible product on hand to test the MHL function.

Despite a recent redesign, Sharp's menu still feels a few steps behind those of its competitors. There's nothing wrong with the Home Menu per se; there's just nothing especially interesting about it. The black-and-white Home Menu has five options running along the top left part of the screen: Video, Music, Picture, e-Content, and Settings. Below that, in the center of the screen, are icons for the different source options: BD-Video (for the disc tray), USB-1, USB-2, and Home Network (for DLNA servers). If you put a BD or DVD in the disc tray, playback begins automatically. With other source types, you must choose the Video, Music, or Picture category, then select the source where those files reside. E-Content is where you'll find the Web-based services: Netflix, VUDU, VUDU Apps, and YouTube. The inclusion of VUDU Apps increases the overall number of applications; Pandora, Facebook, Flickr, and Picasa are located in the VUDU Apps section, along with a number of entertainment and news channels. However, Sharp's Web offerings still aren't as extensive as you'll find elsewhere.

Within the Settings menu, I noticed a couple of omissions in terms of A/V setup. For one, the player lacks a dedicated "24p output" mode that allows you to dictate whether or not Blu-ray movies are output at 1080p/60 or 1080p/24. Instead, Sharp has set up the system as follows: If you choose the Auto resolution setting, then Blu-ray movies will be output at 1080p/24; if you choose the 1080p resolution setting, they will be output at 1080p/60. The menu lacks advanced picture adjustments, like preset picture modes and noise reduction. The only 3D setup options are the ability to set the 3D mode for Auto or 2D and turn on/off the 3D warning; you don't get advanced options like depth/perspective adjustment or 2D-to-3D conversion.

In terms of BD and DVD playback, the Sharp proved to be a solid performer. Its speed in power-up and disc loading was quick, and it responded quickly and reliably to remote commands. In my limited time with the player, I didn't encounter any stuttering or freezing during disc playback. I ran the player through my arsenal of 480i and 1080i processing tests, and its performance in this respect was good but not exceptional. It passed the film-based tests on both the SD and HD versions of the HQV Benchmark disc. With the HQV DVD, it cleanly rendered all of the assorted cadences, and it did a good job with my real-world demo scenes from the Gladiator and Bourne Identity DVDs, producing minimal jaggies and other artifacts. It didn't perform as well with video-based signals, though. With both 480i and 1080i sources, I noticed an above-average amount of jaggies in diagonals.

Read more about the Sharp BD-AMS20U Blu-ray player on Page 2.

The player struggled in the area of network and Web-based features. The
Netflix and VUDU services worked fine for me, but I was never able to
watch YouTube content. The Main Menu would pull up thumbnails of
available content; but, whenever I tried to cue up a video, the screen
went blank and nothing happened. When I tried to search for content, I
got no results. In the area of DLNA streaming, the Sharp communicated
reliably with the AllShare DLNA app on a Samsung tablet, but it never
recognized the PLEX DLNA server software running on my Mac. The player
has very limited file support: JPEG, MP3, and Divx video are your only
playback options through USB and DLNA.

Finally, Sharp offers an
AQUOS Blu-ray Control app for iOS devices; but, for some strange reason,
the company has chosen to disable IP control by default in the player.
You have to go into the Settings menu, to Communication Setup, and
enable IP control. You must create a login ID and password that you then
enter into the remote app on your phone or tablet. This is far more
complicated than it needs to be, and it took several tries for me to
pair the player and the iPhone app. The control app pretty much mimics
the controls on the remote, with the only addition being gesture control
that only worked sporadically. There's also no virtual keyboard for
text input, so I saw little reason to use the control app over the
remote.

High Points
The BD-AMS20U is a 3D-capable Blu-ray player.
The player has internal decoding and bitstream output of high-resolution audio sources.
Wired or wireless network connectivity is available. The player comes with a USB WiFi adapter.
The player has an HDMI input with MHL support, for playback of A/V content on compatible smartphones/tablets.
Sharp's Web platform includes Netflix, VUDU (with Apps), and YouTube. DLNA media streaming is also supported.

Low Points
Sharp's "smart" Web offerings aren't as extensive as some of its
competitors, and features like YouTube playback and DLNA streaming did
not work reliably.
Disc-tray operations are fairly loud.
This
model does not include dual HDMI outputs to send separate signals to
your 3DTV and A/V receiver. It lacks 2D-to-3D conversion and advanced 3D
image adjustments.
It lacks analog A/V outputs, so it's not the best choice for someone who owns an older HDTV or A/V receiver.
The iOS control app is cumbersome to set up and does not include a virtual keyboard.

Competition and Comparison
Compare the Sharp BD-AMS20U with its
competition by reading the reviews for the Samsung BD-E6500, LG BD670,
and Toshiba BDX5200. Learn more about Blu-ray Players by visiting our Blu-ray category
page.

Conclusion
As
a Blu-ray player, the BD-AMS20U is a solid performer, offering good
speed and reliability. However, at the $149.99 price point, the
BD-AMS20U faces a lot of competition from rivals like Panasonic, LG,
Sony, and Samsung that have much better "smart" Web services. If all you
care about is disc playback and occasional access to Netflix, VUDU, and
Pandora, then the BD-AMS20U can deliver, but there are other models on
the market that can deliver the same features at a lower price point.