While Sharp is offering the 52-inch LC-52LE835U LED HDTV at a reasonable price, especially given the television's 3D-capability, the company may still have some ground to make up. 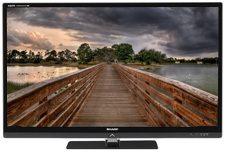 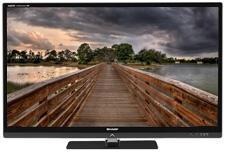 The LE835 Series is one of Sharp’s top-shelf 2011 lines; as such, it’s loaded with the company’s most advanced performance technologies and features. The LE835 Series includes screen sizes of 60, 52, 46, and 40 inches. We have not performed a hands-on review of the 52-inch LC-52LE835U, but here is a more comprehensive look at its features. This 1080p LCD is an active 3DTV that employs frame-sequential 3D technology, in which the TV alternately flashes a full-resolution left-eye and right-eye image. To view the 3D image, you need special 3D glasses that contain shutters that open and close in sync with the signal to direct the appropriate image to each eye. Sharp doesn’t include any 3D glasses in the package; each pair will currently cost between $70 and $100. The TV supports 2D-to-3D conversion to produce a simulated 3D image from standard 2D content. The Sharp 3D glasses include 3D-to-2D conversion, allowing different users to view the same source in 3D or 2D as desired.

The connection panel includes four HDMI inputs, as well as one component video input, one PC input, and one RF input to access the internal ATSC and Clear-QAM tuners. All four HDMI ports are side-facing for easy access. Dual USB ports are available for media playback, and an Ethernet port is available for a wired network connection. The LC-52LE835U offers RS-232 for integration into an advanced control system.

The TV includes a nice assortment of picture adjustments, including: nine picture modes; an adjustable backlight and an automatic brightness sensor called OPC; five color-temp presets, plus advanced white balance controls; a six-point color management system; gamma adjustment; and digital noise reduction. The LC-52LE835U doesn’t have a true 240Hz refresh rate: It has a 120Hz refresh rate, and you can select between four Motion Enhancement options that affect the actual output. In the off mode, the TV duplicates frames to get to 120Hz. The “120Hz High” and “120Hz Low” modes add varying degrees of frame interpolation, which results in smoother movement. Finally, the AquoMotion 240 setting flashes the LEDs to create a 240Hz effect that’s designed to more effectively reduce motion blur. In the 3D realm, adjustments include a 3D Brightness Boost function, with low, middle, and high options; the ability to adjust the depth of 3D still images and converted 2D-to-3D content; and the option to display the amount of time you’ve been watching 3D content. The TV has four aspect-ratio options for SD content and five options for HD, including a Dot by Dot mode for viewing 1080i/1080p images with no overscan.

Read about the high points and low points of the Sharp LC-52LE835U on Page 2. 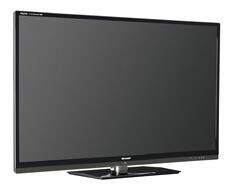 Finally,
the Power Control menu includes power-saving settings to reduce power
consumption, as well as an Audio Only option lets you turn off the video
signal when you’re only listening to an audio source. There are also
settings to automatically turn off the TV when no signal or no operation
is present for a designated time period.

High Points
• The LC-52LE835U supports 3D playback.
•
Sharp’s Quattron technology adds yellow to the standard RGB filter,
which is designed to improve brightness and the TV’s ability to
reproduce yellow and gold.
• The edge-lit LED design allows for a slim cabinet and good energy efficiency.
• AquoMotion 240 technology effectively reduces motion blur, and the TV offers several “smooth” de-judder options.
• LCDs can be very bright, which makes them a good choice for a brightly lit viewing environment.
• The TV has plenty of connection options and picture adjustments.
•
Sharp’s Web platform includes Netflix, VUDU, CinemaNow, and others, and
the TV supports a wired or wireless network connection. DLNA media
streaming is available.
• The TV has an RS-232 port.

Low Points
• The package does not include 3D glasses, and active 3D glasses are more expensive than passive ones.
•
Edge-lit LED-based LCD TVs can suffer from brightness-uniformity
issues, and this TV lacks local dimming to improve black level and
uniformity.
• The 3D menu doesn’t include as many adjustment options as you’ll find with some 3DTVs.
• LCD viewing angles are not as good you’ll find with a plasma TV.
• Sharp’s Web platform isn’t quite as robust or customizable as some of its competitors.

Competition and Comparison
Compare the Sharp LC-52LE835U with its
competition by reading the reviews for the Panasonic TC-P50GT30,
Sony KDL-46EX720,
and Samsung UN55D8000.
Learn more about 3D HDTVs by visiting our 3D HDTV section.

Conclusion
The
LC-52LE835U has an MSRP of $2,099.99, but its street price is now at
about $1,700. All in all, it represents a fairly good value for a
larger-screen HDTV that offers 3D capability, LED lighting, “240Hz”
technology, and integrated WiFi. Sharp’s Web package still has some
catching up to do, compared with Sony, LG, Samsung, and Panasonic. But
the company is adding new services regularly. If you aren’t especially
interested in 3D capability but like the rest of the LC-52LE835U’s
package, you might consider stepping down to the LC-52LE830U: It omits
3D and offers 120Hz instead of AquoMotion 240 but s otherwise quite
similar…and it costs several hundred dollars less. 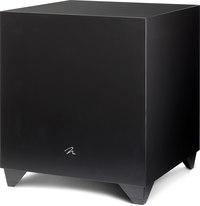