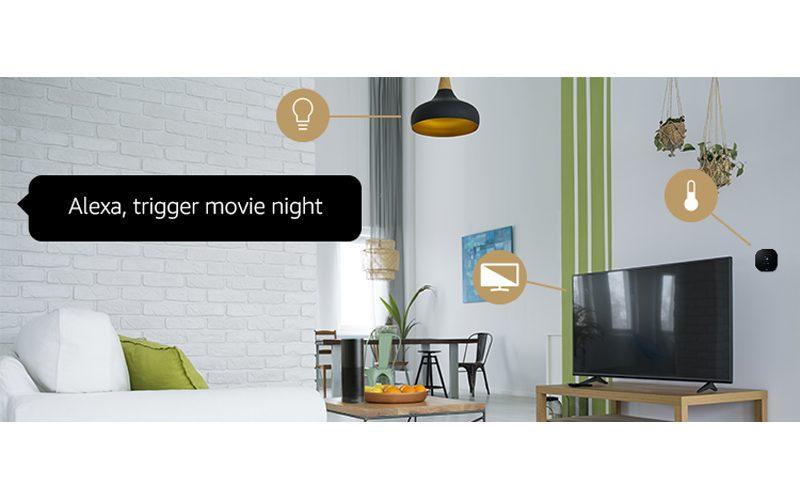 When Amazon started promoting its new Smart Home Services on its website earlier this summer, Best Buy shares took a hit because at least some folks viewed Amazon’s new offering as a direct shot against Best Buy’s Geek Squad. However, considering the limited service options offered by Amazon Smart Home Services and the limited number of U.S. markets in which it is currently available (just seven, all on the West Coast), Best Buy–and by extension most other consumer electronics and home theater specialty retailers–doesn’t have too much to worry about. At least for now, anyway.

As far as the future is concerned, though, these retailers should probably sweat at least a little bit … and they should start developing a strategy to mitigate the risk because consumer demand for smart home devices is only going to keep growing.

The bread and butter of Geek Squad has long been computer repairs and TV installation and related services. However, amidst the rise of the smart home and connected devices, Best Buy began offering a wide range of Geek Squad smart home services, including smart home consultation and the setup of smart lighting, security, networked audio, and Wi-Fi systems, as well as voice control functionality. Best Buy’s Web page for those services now specifically refers to them as Smart Home Services . It’s not clear when that exact wording began to be used at BestBuy.com. In July, spokesman Shane Kitzman said, “We’ve been expanding our smart home services portfolio for quite some time, as a growing number of customers ask for help from the Geek Squad to determine their best options and seek installation support. This page was recently updated to provide additional details about the specific smart home products we support. These and related home networking services have been provided by Geek Squad for a number of years.”

Amazon Smart Home Services, at least initially, appears to be focused solely on the same sort of smart home services being touted by Best Buy, based on the wording on the Amazon website. There is no mention on the site of TV installation and repairs being included in the service–despite the fact that a growing percentage of TVs in U.S. homes are smart and, in some cases, serve as the actual smart home hub itself. Just take a look at Samsung’s highest-end 4K TVs and its SmartThings product line.

As connected devices like Amazon’s Alexa become more and more popular, the big questions for CE retailers, home theater specialty dealers, and custom installers and integrators are: will Amazon expand its smart home service offerings to include TVs, complete home theater systems, and other related products; if they expand the service, when that will happen; and when will Amazon Smart Home Services become available in all U.S. markets? (Amazon Smart Home Services currently only serves Los Angeles, Orange County, San Diego, San Francisco, San Jose, Portland, and Seattle.) For now, Amazon’s being mum on such details. The company declined to comment for this story.

As Amazon increases its presence in the physical brick-and-mortar world in the form of its Amazon Books stores (which also sell its smart devices), the Amazon Go prototype grocery store in Seattle, and its plan to buy Whole Foods, it’s only logical to wonder when the company will open brick-and-mortar stores dedicated to smart devices, as well.

The news about Amazon Smart Home Services reflects what Best Buy already knew: consumers love technology, but they often need help to get the most out of it. That’s what Best Buy said in a statement after the Amazon news was revealed. Best Buy also said that it feels “uniquely positioned to serve consumers by offering products, services and support wherever the customer wants it,” including at the retailer’s 1,000 stores, at BestBuy.com, or in the homes of customers “millions of times a year” through Geek Squad visits.

“I would not say that we are not concerned with what they are offering,” said Chad Taylor, product manager at Abt Electronics, which has one store in Glenview, IL, and a significant e-commerce operation. “It will ultimately boil down to the people that they hire to perform the installations,” he said, adding that the folks at Abt already provide these services and “we constantly strive to provide the best possible service, which sets us apart from the national chains.” He continued, “We do our very best to hire the best people to provide the best service possible to our customers. That is what has made us successful in this area. This business is all about service and capability. We spend a lot of time and money on both.”

Alan Guyes, principal and home A/V buyer at Audiotronics in Virginia, brought up another point: “I think that the current iteration of this Amazon product/service is chasing a market segment that we find difficult and impractical to service. That is to say, the one-off in/out ‘smart’ home customer looking for installation of a basic smart device, where much of the environment of their home is unknown and potentially a non-billable time vortex.”

He added, “Given that we are currently running at capacity for installation jobs (that are considerably larger in scope than connection of a simple smart device), adding this Amazon service to our bag of tricks would prove counterproductive.” But he did acknowledge that, “in the future, it could prove useful for lead generation” to offer such services.

The Consumer Technology Association (CTA) “does not comment on individual members’ competitive situations,” Steve Koenig, its senior director of market research, responded when I asked him if CE retailers should be concerned about Amazon Smart Home Services. However, he offered a warning for CE dealers who are sitting on the sidelines when it comes to smart devices and services: “If there is a caution, it is for any retailer who is not paying close attention to consumer appetite for connected devices,” he said. “It is clear that consumers are excited about smart home products and services,” he told us, pointing out that CTA projects sales in the category–including smart thermostats, smart smoke and carbon monoxide detectors, IP/Wi-Fi cameras, smart locks and doorbells, smart home systems, and smart switches, dimmers and outlets–will hit 27 million units in 2017 (a 50 percent increase over 2016), earning $3.3 billion (a 48 percent increase). He added, “We would expect sales and support services to respond to this increasing demand.”

Amazon’s brand recognition “makes them top of mind” now among consumers, NPD analyst Ben Arnold said. He guessed that Smart Home Services represents another way for Amazon to somehow provide value for its Amazon Prime paid subscription service. Although Prime wasn’t mentioned in the Smart Home Services marketing he saw, Arnold said he suspected that, if there wasn’t some sort of link yet between the two services, there would be in the future, such as through some sort of special pricing offer. That’s something that would separate Amazon Smart Home Services from what Best Buy offers, he said.

“When you think of the brand Geek Squad, I think about PC repair and some home theater setup,” Arnold said. In contrast, Amazon is focusing much of Smart Home Services around the connected home and its popular Alexa, which “has tentacles that spread throughout the house.” As part of Smart Home Services now, “they’ll come and set up your Amazon Fire device for $10” but apparently won’t mount one’s TV onto the wall, Arnold explained. However, he added: “I think we can reasonably expect [home theater installation] to eventually become a part of the service” if it isn’t already.

Therefore, impact from Amazon Smart Home Services on the home theater installation sector may be “felt further on, perhaps as they get a bit deeper into this and assess what their customers’ needs are,” Arnold added.

Amazon isn’t the only challenger that traditional CE and home theater retailers and installers may be facing in the future, Arnold pointed out, noting that one of the things that NPD has seen when doing research on the smart home is that home security companies represent an “avenue where consumers are getting devices and, I’m sure, getting help with setup” of smart home products. “I would not expect” a company like ADT Security “to get into home theater installation, but … these two spaces are coming pretty close to each other … The connected home is coming right up against the connected home theater, and so I would see this Amazon service certainly competing with Best Buy [and] competing, I would expect, with the home security companies that are curating devices and helping with setup. But I wonder at what point do all of these spaces kind of converge as we see the product lines blur.”

The other factor that might make at least some CE and home theater specialty retailers more than a bit nervous is the fact that Amazon doesn’t seem to care a whole lot if its investment efforts cost a lot of money in the short term. Amazon shares took a major hit in late July, when it reported that its profit for the second quarter was weaker than a year ago and much lower than analysts had expected. While Amazon can apparently afford to keep spending millions and millions of dollars betting on the future with initiatives that include the production of more original movies and TV shows, products including the new Echo Show and its entire line of artificial intelligence-powered Alexa voice-controlled devices, and a deeper presence in brick-and-mortar retail, few CE and home theater specialty retailers can afford to make such lavish investments.

Regardless, one thing seems clear at this point: any retailer that sells and installs CE and home theater devices better come up with an effective strategy for smart home products. If not, Amazon and other companies will be eating their lunches and even their dinners–if not tomorrow, then a few years down the road.

Have you used Amazon or Best Buy’s Smart Home Services yet? If so, please share your experience with us in the Comment section below.