A new transfer cable was unveiled by Silicon Image today. The cables are v3.0 of the MHL standard, which was designed to facilitate the transfer of Ultra HD content from one device to another, a critical feature to help bring... 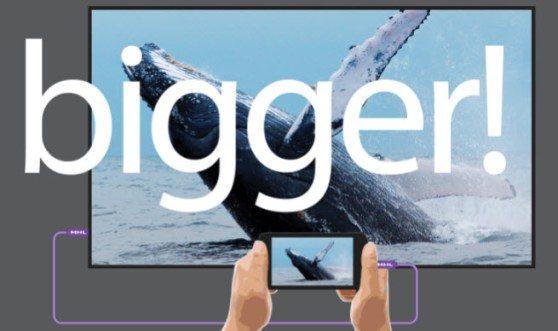 A new transfer cable was unveiled by Silicon Image today. The cables are v3.0 of the MHL standard, which was designed to facilitate the transfer of Ultra HD content from one device to another, a critical feature to help bring 4K into the mainstream. In addition, the cable charges any mobile device it is plugged into while transfering files. The cable allows for a business presentation to be streamed to a projector or for a traveler to stream the content on his phone to a hotel room TV.

Support for transferring the highest-resolution videos from a smartphone to a TV just got a lot stronger.

Silicon Image announced today it has created chips that support MHL 3.0 cables, which can transfer 4K Ultra HD video from a mobile device to a living room television or other high-resolution displays. This sort of infrastructure may not seem that sexy, but it is a vital part the refresh cycle for the next generation of televisions. If we can't show 4K video on a screen, nobody will want a 4K screen.

The good thing for MHL is that a lot of smartphone makers are beginning to equip smartphones and tablets with 4K screens, said David Kuo, the senior director of marketing at Sunnyvale, Calif.-based Silicon Image, which is one of the major companies driving the MHL standard.

"We're seeing video drive this change as well as the use of smartphones to play games that you can view on the big screen," Kuo said. "The experience is much more immersive on your TV."

Silicon Image has crafted three chips: an MHL 3.0 mobile transmitter, a bridge to other cable standards, and a multimedia switch. With them, Kuo said that phone makers will be able to create mobile devices that can display cinema-quality movies on a big screen.

MHL is the standard for connecting a mobile device to large screen displays via a wire. The newest version 3.0 can transfer video to a 4K Ultra HD screen, which has four times as many pixels on a screen as a standard 1080p high-definition TV. Some 4K Ultra HD models are selling for under $1,000 this holiday season, though the higher-quality versions are still pricey.

At the same time as it transfers video, MHL 3.0 can also charge a device with power and transfer universal serial bus (USB) data over the same wire at the same time. MHL 3.0 has doubled the bandwidth of MHL 2.0 as well as a wider color gamut. It has built-in copyright protection using the HDCP 2.2 standard. Since its channels are bi-directional, it also supports high-speed peripheral support for mass storage and input devices such as a touchscreen, keyboard, and mouse.

The MHL standard was developed by promoters Nokia, Samsung, Silicon Image, Sony, and Toshiba. The first retail devices debuted in 2011, and the installed base for devices supporting MHL is now over 400 million. The MHL Consortium now has about 200 adopters and members. MHL-enabled devices include smartphones, tablets, DTVs, monitors, projectors, A/V receivers, Blu-ray disc players, cables, TV accessories, adapters, automotive accessories, and more. The MHL 3.0 specification was established in August.

Silicon Image, a publicly traded company that also pioneered the HDMI and DVI industry standards, will show off the new chips and hardware using them at the 2014 International CES in Las Vegas in January. The Silicon Image chips are available as samples now and will be in production in the first quarter.