One of the issues that trouble front projection enthusiasts is the instability of HDMI over long runs. Knowing this, SIM2 has developed new technology to boost signal strength over long runs and is including it in their top of the line, 3-chip DLP projectors. 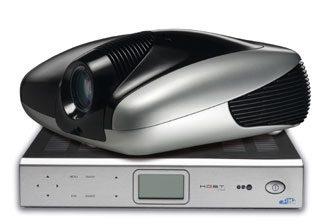 SIM2's C3X LUMIS HOST pairs a reference standard 3-chip DLP-based projector with a discrete outboard projector control electronics module that connects via SIM2's proprietary, three-line optical-digital High-Definition Optical Signal Transfer (H.O.S.T.) system, which is able to connect the two over distances up to 750 feet (250m). Getting 1080p video to perfectly run across long runs of cable has been an issue for video-savvy consumers as well as custom AV installers alike.

"The C3X 1080 is considered the projector of choice when it comes to benchmark three-chip DLP performance in a compact yet elegant chassis. The C3X LUMIS HOST system is a natural evolution for the C3X 1080 Series," said Charlie Boornazian, VP of SIM2 USA.  "We are now offering a three-chip solution that blends the beauty of the C3X series with the brains of a modular processor system.  The ability to separate the projector from its control electronics by fiber-optic cable with a loss-less connection, allows our dealers the ultimate flexibility of installation. The HOST system proved to be wildly popular for our single chip offering the HT3000E - and by completing the package with a three-chip reference design glamour goes modular the SIM2 way."