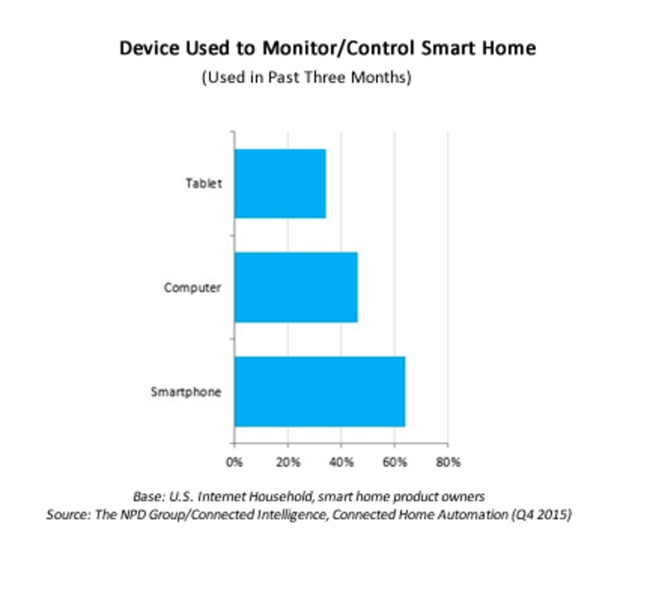 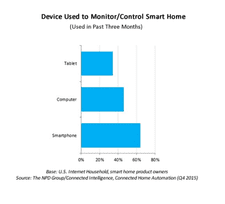 In its recent Home Automation Report, The NPD Group Connected Intelligence Division found that the smartphone is the preferred control method for a majority of smart-home product owners. Nearly two-thirds of smart-home product owners control and/or monitor their system via a smartphone, while less than 50 percent use a computer interface and less than 40 percent use a tablet. The report also showed that these product owners have a strong preference for using voice control: 73 percent already use voice commands, and 61 percent want to see this technology expand to a wider range of products in their home.

From NPD Group
As the desire to create intuitive home spaces continues to increase, so too do the opportunities for devices and technologies to gain share in the smart home market. According to The NPD Group Connected Intelligence Connected Home Automation Report, nearly two-thirds (64 percent) of smart home product owners used a smartphone to control or monitor their home automation devices. Additionally, 73 percent of smart home owners already use voice commands, with 61 percent of those consumers expressing an interest in wanting to use voice to control more products in their homes.

“This reliance on smartphones to control and monitor the smart home is due, in part, to app compatibility, as nearly all home automation devices have an iPhone or Android app,” said John Buffone, executive director, Connected Intelligence. “As apps and devices become more intuitive, voice recognition – and thus, voice control – will begin to play a more prominent role in the further development of the smart home.”

In line with the momentum to automate and control the smart home, The NPD Group’s Retail Tracking Service has also recorded that Home Automation sales are up 41 percent year-over-year in 2015 versus 2014. This tracking service’s metrics incorporate not only systems controllers such as thermostats, but also the broad range of smart capabilities across technologies such as power, sensors, lighting, security/monitoring, locks, and kits.

In addition to wanting compatibility, consumers also desire convenience, evidenced by the increased usage of voice commands in the smart home market; and that number is only expected to increase as the majority of smart home product owners have indicated their desire to better integrate speech recognition technology throughout their homes. Rising to meet consumer demand is a new product set that showcases the functionality of voice command technology, such as the Amazon Echo, which leverages voice controls to turn on a Phillips Hue bulb or change the temperature settings on an Ecobee thermostat.