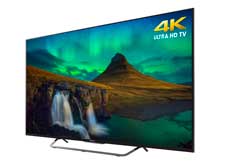 For 2015, Sony will offer six new series of 4K Ultra HD TVs. The X830C, X850C and X930C/X940C are available for pre-order today and will ship in May. The X900C/X910C will be available this summer. The new models join the X950B and X800B, a line of 4K Ultra HD projectors, including the VPL-VW350ES and the 4K Ultra Short Throw Projector, and an extensive list of sound products to provide consumers with more choices than ever to create an ideal home entertainment experience.

Brilliant Picture Quality
The full 2015 4K Ultra HD lineup is powered by the X1 processor engine, maximizing contrast, color and clarity in both HD and 4K content. While Sony TVs have had expanded color, brightness range and upscaling for years, the X1 processor takes another step forward in improving these features. Thanks to X-Reality PRO Picture Engine, developed from over ten years of experience in upscaling, all existing HD content is upscaled to super clear 4K quality. And TRILUMINOS, found on the X850C series and up, provides the widest color range ever and dynamic color correction ensures colors are as consistent and accurate as possible.

The X930C and X940C series will also be compatible with High Dynamic Range (HDR) content via a network update this summer. HDR is an emerging video format that can display a wider range of brightness levels which will allow content creators, such as movie directors, to expand their range of creativity. HDR content will be available from major video service providers like Amazon and Netflix this year. With Sony’s unique technology, X-tended Dynamic Range PRO (75-inch model) and X-tended Dynamic Range (65-inch model), customers can enjoy a peak brightness of LED as well as deeper blacks, providing them with a superior viewing experience compared to that of normal HDR video sources as well as any other video source.

Sony’s commitment to developing the 4K Ultra HD ecosystem continues, from lens to living room. As a founding member of the UHD Alliance, Sony has joined a coalition of companies united to establish new standards to support innovation in video technologies including 4K and higher resolutions, high dynamic range, wider color gamut and immersive 3D audio.

With Google Cast, users can cast their favorite entertainment apps such as HBO GO from their Android or iOS device, Mac or Windows computer or Chromebook to the TV.

The voice search feature helps users find content quickly and easily just by speaking into the One-Flick remote or compatible smartphone and the Android TV home screen personalizes content and recommendations based on what you like to watch.

This summer, gamers can also bring the immersive world of PlayStation direct to the TV with PlayStation Now. PlayStation 3 games can be streamed to the TV and played with a DUALSHOCK 4 controller.

Ultra-thin
At just under 0.2 inches thin, the X900C model is thinner than a smartphone and is the thinnest LED TV in the world. With a Vanishing Edge screen, the picture fills the screen to the very edge so it appears the picture floats on the wall. The bezel-free edge is so thin that it practically vanishes while watching, leaving only a stunning 4K picture. With an included wall mount, the X900C and X910C are easy and fast to mount and rest flush against the wall.

Pricing and availability
The X830C, X850C, X930C and X940C 4K Ultra HDTVs are available for pre-sale today, and will be on-sale in May at store.sony.com, amazon.com/sony, bestbuy.com and other authorized dealers nationwide.

The 2015 HDTV series (R510C, W800C, W850C) are also available for pre-sale today, and will be on-sale in May at store.sony.com, amazon.com/sony, bestbuy.com and other authorized dealers nationwide.

The X900C and X910C will be available this summer, pricing to be announced.