Sony has announced pricing and availability for its 2016 UHD TVs. The new X850D, X930D, and X940D models (seven TVs in all, sized from 55 to 85 inches) are available for preorder now through authorized sellers and will be available... 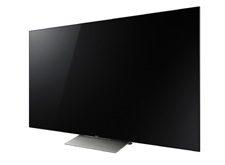 Sony has announced pricing and availability for its 2016 UHD TVs. The new X850D, X930D, and X940D models (seven TVs in all, sized from 55 to 85 inches) are available for preorder now through authorized sellers and will be available in March. All seven models feature HDR and wide color gamut technologies. The flagship 75-inch XBR-75X940D (shown here) is the only model with a full-array LED backlight and will carry an asking price of $7,999.

From TWICE
Sony revealed the pricing and ship dates of its latest 4K Ultra HD TVs but wouldn't divulge specifications such as brightness levels or color gamut because "picture quality is not only about numbers," said TV business director Sunil Nayyar.

The company is chasing quality, not numbers, he said.

In its 4K lineup, Sony is expanding its selection of 4K TVs with high dynamic range (HDR), bringing Open HDR technology to all seven of its new 4K models. The company offered two 4K TVs in its 2015 lineup with HDR-upgrade capability.

The seven TVs are available February 16 for presale and be will available in March at Amazon, BestBuy.com and other authorized dealers.

Black levels: The X930D models feature proprietary Slim Backlight Drive, a grid-array edge-lit local-dimming technology said to deliver the benefits of full-array local dimming while keeping the display thin. The grid array achieves more dramatic contrast by distributing the light source more precisely to each specific zone of a screen, the company said. The X930D models are so thin that, when hung on a wall, they stick out only 36.7mm (1.44 inches), the company added. Large areas of the displays are only 0.47-inches-thick.

All of the 2016 4K TVs feature edge-lit frame dimming except for the 75-inch X940D, which features direct LED full-array local dimming and is promoted as delivering near-OLED black levels. The company said the TV's black levels are very close to those of Sony's OLED reference monitor, which is used by studios and broadcasters.

Flight to quality: Whatever their specs, the performance of all seven models will exceed that of competing 4K HDR TVs, said TV product technology manager Philip Jones. The company is "confident" of exceeding competitors' quality, he said, because of such technologies as X-tended Dynamic Range Pro, which appears in the X930D and X940D series to improve contrast. He also cited Triluminos display technology in all series to deliver a wide color gamut. All models also get the company's X1 processing chipset to enhance clarity, color and contrast. In this year's 4K TVs, he noted, the X1 chipset get a new algorithm to further upgrade picture quality compared to the X1 chipset used in Sony's 2015 TVs.

Color gamut "is just a measurement of the panel," Jones said, but Sony's X1 processor "can use all the colors correctly to maximize the use of color."

Most of the company's 2016 TVs will be 4K because the company is focusing on premium products, said Nayyar. The 4K lineup also reflect the company's focus on picture quality, design, and user interface, he said.

To read the full TWICE story with more details on the new models, click here.