Blu-ray players have become more and more ubiquitous in consumer's homes, but the best ones still cost more. But that is not always the case, as Adrienne Maxwell reveals in this review of the Sony BDP-S185 Blu-ray player. 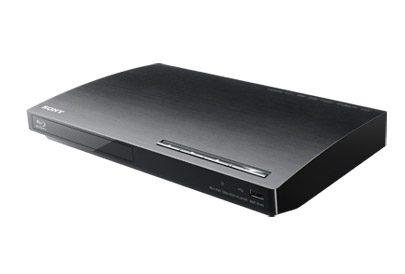 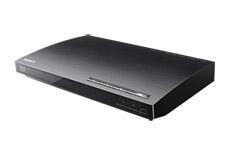 The BDP-S185 is the least expensive model hailing from Sony’s 2012 Blu-ray lineup. The company recently released a trio of 2013 Blu-ray models (reviews coming soon), but this budget model is still available through many outlets and remains the best value in the line, selling for as little as $80. To keep the cost low, Sony has omitted 3D capability, wireless network connectivity, and DLNA media streaming, among other things. However, this budget player does include a wired Ethernet port and Sony’s Web platform, which gives you access to major VOD services like Netflix, Amazon Instant Video, Hulu Plus, YouTube, and VUDU.

The BDP-S185 has a brushed-black finish and petite form factor, measuring just 11.5 by 7.5 by 1.75 (at its tallest point) inches. The player features a slide-out disc tray and top-panel buttons for open/close, play, stop, and power. There’s no front-panel display, another way Sony cut costs. The connection panel sports one HDMI output, one coaxial digital audio output, and one A/V out (composite video, stereo analog audio), as well as the aforementioned Ethernet port and a front-panel USB port for BD-Live storage (there’s no internal storage) and playback of media files. This entry-level model comes with a basic IR remote and is not compatible with Sony’s Media Remote control app for iOS/Android devices.

The BDP-S185 uses Sony’s well-known XrossMediaBar menu structure, with all of the functions and apps cleanly organized into main menu options called Setup, Photo, Music, Video, Network, and Sony Entertainment Network. The SEN menu includes Sony’s Music and Video Unlimited services; other Web-based apps like Netflix, Amazon, Hulu Plus, and Pandora are located in the Video and Music menus. One feature of note in terms of A/V setup is that the BDP-S185 includes a source-direct video mode to output all sources at their native resolution, something you rarely find at this low price point. This little player also includes some advanced picture adjustments, including the ability to choose between preset picture modes and engage noise reduction. The BDP-S185 has internal Dolby TrueHD and DTS-HD Master Audio decoding (it decodes TrueHD to 5.1 and DTS-HD to 7.1), and it will also pass these formats in bitstream form over HDMI, for your A/V receiver to decode.

In terms of disc playback, I had no major concerns with the BDP-S185. Power-up and disc-loading speeds are fairly quick (on par with other recent players I’ve used), and I experienced no stutters or hiccups during playback. Its disc-tray operations were quieter than the recent Sharp BD-AMS20U I reviewed (which costs about twice as much). One potential source of confusion involves BD-Live playback: To access BD-Live content on a Blu-ray disc, you must have a USB flash drive inserted in the USB slot to provide storage. If you don’t have a USB drive inserted and try to launch a BD-Live feature, instead of telling you that you need to insert a USB drive, the player tells you that there’s no network connectivity. That might lead you to think your network connection is bad when it’s not. Just remember to insert the flash drive, and it will be well. (With that being said, I can’t help but wonder if anyone really uses BD-Live anymore.)

I tested the player’s 480i and 1080i deinterlacing using my standard HQV test discs, and the BDP-S185 passed all of the film-based and assorted-cadence tests. It cleanly rendered my real-world DVD demo scenes from Gladiator and The Bourne Identity, producing virtually no jaggies, moiré, or other artifacts. Video-based content didn’t fare quite as well in either the 480i or 1080i realm; the player created a fair amount of jaggies in real-world video-based signals. The good news is, if you own an external scaler or TV that has better overall processing, you can use the BDP-S185’s Original Resolution (source direct) mode and let the external device handle your scaling. Again, that’s a rare option at this price point.

Read more about the Sony BDP-S185 Blu-ray player on Page 2. 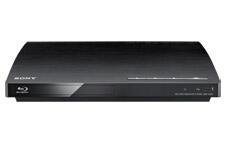 The Web-based services that I tested worked without issue. Sony does require you to register the player online before you can use Web-based features. This involves using a computer, entering a registration code, and creating a master Sony account. During this online setup, you can link to services like Amazon Instant Video and Pandora through the computer, so you don’t have to enter user names and passwords directly through the player’s interface, which is a time-saver. Other services like Netflix and VUDU require you to sign in directly via the player; and, since this player isn’t compatible with the remote control app, you have to do all the text entry via the onscreen interface. The BDP-S185 doesn’t support media streaming over DLNA, but the player does have good file support through the disc and USB playback, including MKV, WMV9, AVCHD, Xvid (AVI), MP3, WMA9, AAC, and LPCM.

Competition and Comparison
Compare the Sony BDP-S185 with its competition by reading the reviews for the Sharp BD-AMS20U, Samsung BD-E6500, and Pioneer BDP-140. Learn more about Blu-ray technology and check out our full list of Blu-ray player reviews here.

Conclusion
All in all, I was quite impressed the BDP-S185 for the money. It’s a nice little budget player that would make a great addition to a secondary TV, especially if you’re already thinking about adding a streaming media player to said TV. For a price equal to or less than many dedicated streaming media players, the BDP-S185 gives you most of the same big-ticket Web services and adds a good-performing Blu-ray player to boot. Just be sure you can run a wired network connection to the desired location, since the big omission here is wireless network support.

As I mentioned in the opener, during my review of this product, Sony released its 2013 Blu-ray models, including the new entry-level BDP-S1100 – which has a very similar feature set to the BDP-S185 and retails for $89.99. The BDP-S185 is currently available for even less and represents the best value in Sony’s line; but, should the player be gone by the time you read this, the new BDP-S1100 should offer very similar performance at a very good price. Another option to consider is the 2012 step-up to the BDP-S185: The BDP-S390 adds built-in WiFi and now sells for a discounted price of $89.99 through sony.com.

Can this be hooked up to a tv without hdmi capability? Through just the red, yellow and white cables?

Yes, as long as the TV has the same connection type, you should be fine.

0
Reply
Author
Adrienne Maxwell
HomeTheaterReview Product Rating
Value:
Performance:
Overall Rating:
When you buy through links on our site, we may earn an affiliate commission. Your support is greatly appreciated!
This is the static ad content. This is just a placeholder for now to get things styled.
Visit Website