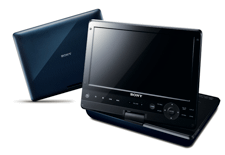 When connected to a broadband Internet network, all models offer access to over 40 services through the BRAVIA Internet Video platform including Sony's Video On Demand and Music Unlimited powered by Qriocity, as well as Netflix, Pandora, Hulu Plus, Amazon Video on Demand, YouTube, Slacker Internet Radio, Crackle and Blip.tv.

The line is also compatible with Sony's new HomeShare wireless audio products such as the new SA-NS400 Wi-Fi network speaker allowing users to stream audio from the devices through the home via Wi-Fi. Blu-ray Disc Players
Sony's BDP-S780 Blu-ray Disc player is Blu-ray 3D capable and compatible with DVDs, CDs, and SACDs. The model features built in Wi-Fi as well as an Ethernet jack for easy access to BRAVIA Internet Video and BD-Live.

Compatible with Digital Living Network Alliance (DLNA) devices, the model serves as a DLNA client and allows you to wirelessly share digital photos, music, and video media from your PC using your home network. It also includes a front USB input for access to photo, music, and video playback.

The player also has Skype embedded. When connecting a USB TV camera, users can enjoy free widescreen Skype-to-Skype video calls with friends and family from the comfort of their living rooms.

Users with an iPhone, iPod touch, or Android mobile device can control Sony's entire Blu-ray line-up using a free application that can be downloaded from the app stores. The updated Sony "Media Remote" app allows the mobile device to function as a remote control that includes the ability to access a Blu-ray Disc's details such as jacket artwork, actor, and production information as well as search for additional video clips online.

With an Android phone, consumers can also use the app to control their Sony Blu-ray and Bravia products with their voice. The app is also compatible with select new BRAVIA HDTVs announced today.

Sony claims that with the press of a button, the BDP-S780 can up convert 2D content to simulate 3D and allegedly improves standard definition and web video quality with Sony's IP Content Noise Reduction technology and Precision Cinema HD Upscaling technologies.

Also new to Sony's Blu-ray player line is the BDP-S580 Blu-ray Disc player which will be available in March for about $200.

The BDP-S480 Blu-ray player will be available in March for about $180.

The BDP-S380 Blu-ray player will be available in February for about $150. The model also features a universal remote, as well as the "Media Remote" control app available for iPhone/iPod touch and Android devices.

The model also comes with an iPhone/iPod dock and offers two HDMI inputs and will be available in May for about $600. The model will be available this spring for about $300.