Sony is bringing a pro monitor level of performance to its new consumer displays, along with some interesting calibration features for reference material and streaming alike. 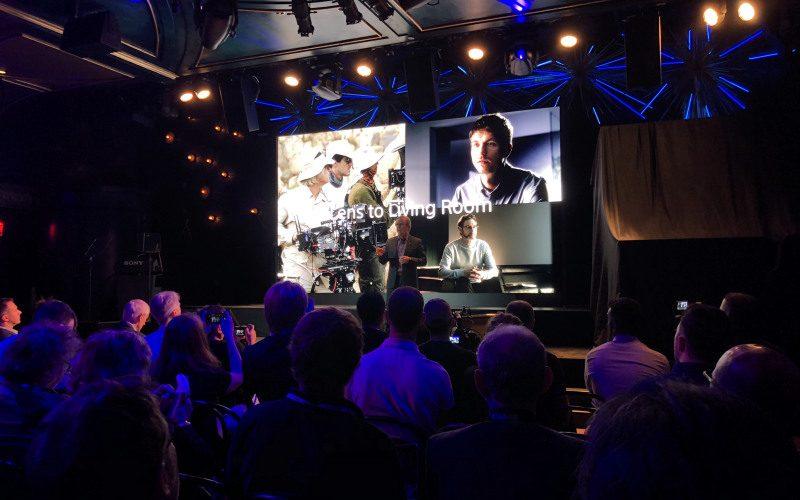 Today, Sony launched a new line of reference UHD television sets called the Master Series. With the stated goal of trying to match the performance of their classic 30-inch mastering monitor from their Professional series, which is used on many movie and TV production sets, Sony gave a first look at a handful of new, top-of-the-line OLED and LED televisions. A release date for these sets is stated as "this fall," and the sizes of the displays we were shown seemed to range from 65 to 75 inches and maybe as large as 80 inches (likely in an LED over and OLED) model. Prices will be announced at the upcoming CEDIA trade show in San Diego early this September. The magic juice behind these new sets is Sony's new X1 processor, which is where the company is focusing much of its development energy. The X1 processor works with both OLED and LED panels and allows for many performance enhancements. In the Z9F LED, there are performance improvements based on Sony's X-motion technology, which is designed to reduce soap opera effect and to deal with motion issues that often plague LED sets. OLEDs promise to improve on already impressive black levels and at first glance have simply jaw-dropping color reproduction.

Both sets come ready for CALMAN software, so they are very friendly to the calibration community right out of the box. Hardcore users and custom installers alike will love this addition, as Sony's competitors make it harder and harder to calibrate their "smart" TVs, which are sometimes just a little too smart for their own good.

Sony knows, of course, that even at the highest level, not everyone is going to pay for a professional video calibration for their UHD HDR television but they also know that literally everyone will be streaming 4K (and often 4K HDR content) from the Internet, thus they have partnered with Netflix to offer in both OLED and LED sets a "Netflix Calibrated Mode," which allows end users to get their new reference TV into a mode that is pretty closer to a professionally calibrated set with the click of a few menu options. When the new sets come out, it's going to be interesting to put them through their paces and see the delta between a fully calibrated set and the Netflix Mode, especially given that today's TVs are increasingly offering modes like "cinema" and "theater" that are 90-plus percent of the way to a professional calibration with one menu selection.

The flagship OLED set is called the A9F and packs one hell of a picture, especially for those who loved what plasmas TVs could do in terms of black levels. Sony's current OLED is the first that we've measured at "absolute black," with Samsung's G9 at twice the price coming very close in terms of black levels. I'd tell the guys on the forums clinging on to their Pioneer KURO sets that are 10 years old to upgrade, but I am sure I would get seriously flamed even though these TVs are superior at every level.

Sonically, the current top-of-the-line Sony OLED is a game changer according to Andrew Robinson in his upcoming full review later this August. This is because the Sony TVs' Acoustic Surface (similar in technology to "invisible" architectural speakers like Nakymatone or Sonance speakers) makes the TV panel itself into what on the new OLEDs will be an improved 3.2 channel sound system that can, for moderately sized rooms and for non-audiophiles, replace the need for a soundbar or component sound system. But the new OLEDs are even better than the model we just reviewed, as the TV itself can be configured as a center channel speaker in a 5.1 or even an object-based surround sound system. That's right: gone is the need for an awkwardly positioned, rectangular speaker. In this configuration, the center channel will radiate from the screen right where the actors are performing. One of the big messages of this event was Sony's lens-to-living room initiative, meaning they make literally every part of the workflow from top of the line cameras to editing hardware and monitors to the displays that consumers watch at home, as well as boasting over 13,000 projectors that are installed in movie theaters around the world.

In partnering with Netflix, Sony sticks another knife in the silver disc's short remaining lifespan. It must be painful for a company that made so much money selling Compact Discs, DVDs, and Blu-rays, and still sells UHD Blu-ray players to this day. But as bandwidth gets better and better, more and more people can get UHD Blu-ray like performance from their streaming service. Netflix said that they now have over 400 hours of 4K content (much in HDR) with many times that coming. Amazon Studios is right behind them also with a stash of Emmy-nominated content, and they are building a billion-dollar-plus movie and TV studio right next to Sony's in Culver City, California. There is no question that there is going to be an incredible flow of 4K UHD content coming our way now and the coming months and years, and Sony is wise to be a part of that, not only in terms of workflow, but also technologies designed to make that streaming experience as good as it can be in the home.