One of Sony's mid-level entries into the company's 2011 line of HDTVs is the KDL-40EX620 LED HDTV. The television lacks a few premium features but still has many features to keep users satisfied. 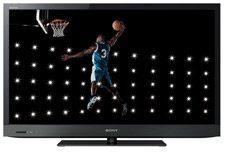 The KDL-40EX620 is a mid-level TV in Sony's 2011 line. We have not performed a hands-on review of this 40-inch 1080p HDTV, but here is a more detailed breakdown of its features. The EX620 Series (which includes screen sizes of 55, 46, and 40 inches) lacks some of the higher-end features you get when you move up the price chain, such as 3D capability, Motionflow 240 (or higher), integrated WiFi, and the monolithic design. Here's what you do get: The KDL-40EX620 uses Sony's X-Reality Engine and edge LED lighting, which allows for a slim profile of 1.66 inches. Motionflow 120Hz processing helps to reduce motion blur and film judder. The BRAVIA Internet Video platform offers an extensive array of Web services, including Netflix and Amazon VOD, Qriocity, YouTube, Pandora, Facebook, Twitter, and more. Skype capability is also available this year, with the addition of the CMU-BR100 camera ($150). The KDL-40EX620 supports DLNA media streaming and the additional of an optional USB WiFi adapter (UWA-BR100, $80). Plus, Android and iPhone apps are available to control the TV.

The connection panel includes four HDMI inputs, as well as one component video input, one PC input, and one RF input to access the internal ATSC and Clear-QAM tuners. Sony has put one HDMI input and the PC input on the side panel for easy access. The side panel also includes two USB ports that support media playback and the addition of the WiFi adapter and/or Skype camera. The Ethernet port is located on the rear panel. The KDL-40EX620 lacks an RS-232 or IR port for integration into an advanced control system.

The setup menu includes a solid assortment of A/V adjustments, beginning with nine Scene Select modes that automatically tailor video and audio settings for a certain type of content (like cinema, sports, or music). In the video-only realm, 14 picture modes are available (several of them are for games, graphics, and photos). You can manually adjust the backlight or enable the ambient light sensor that automatically adjusts the image brightness based on the room's lighting. You get four color-temperature presets, as well as RGB gain and bias controls for precise white-balance adjustment; general, dot, and MPEG noise reduction; gamma adjustment; and an auto light limiter that can reduce light output in really bright scenes to cut down on eye strain. The TV lacks an advanced color management system to precisely tweak the six color points. The Motionflow 120Hz menu has three options (Off, Standard, and High), and this model includes Sony's Auto 1 and Auto 2 Cinemotion settings, which also affect the quality of motion in film sources. The KDL-40EX620 has five aspect-ratio options, with the ability to display 1080i/1080p sources with no overscan.

The KDL-40EX620's audio setup menu includes four sound modes: Standard, Dynamic, Clear Voice, and Custom. In each mode, you can adjust treble, bass, and balance, and the Custom mode allows you to fine-tune the output using a seven-band equalizer. You can choose from seven surround modes, and there's also an "Advanced Auto Volume" function to level out variations; however, this TV does not offer audio-leveling technology from a company like Dolby or SRS.

The TV's Eco menu includes a power-saving mode to lower the backlight level, as well as a Presence Sensor that automatically turns off the TV when no audience is detected for a designated time period. You can set up the TV to turn itself off when it has been idle or has had no signal for a designated time. The TV also has an energy-saving switch to cut standby power consumption without having to physically unplug it from the wall.

Read about the high points and the low points of the KDL-40EX620 LED HDTV on Page 2. High Points
• The KDL-40EX620's edge-lit LED design allows for energy efficiency and a slim cabinet.
• Motionflow 120Hz technology effectively reduces motion blur and offers several settings to tailor the smoothing effect to your liking.
• LCDs can be very bright, which makes them a good choice for a brightly lit viewing environment.
• The KDL-40EX620 includes the robust BRAVIA Internet Video service, as well as DLNA streaming and Skype support.

Low Points
• Edge-lit LED-based LCD TVs can suffer from brightness-uniformity issues. Unlike some higher-end Sony models, the EX620 Series does not include the Dynamic Edge LED system that allows the individual LED to more precisely adjust their light output to produce deeper blacks and better uniformity.
• LCD viewing angles are not as good you'll find with a plasma TV.
• The KDL-40EX620 does not include integrated WiFi; the optional USB WiFi adapter costs $80.
• This is not a 3D-capable TV.
• The TV lacks an IR or RS-232 port.

Competition and Comparison
Compare the Sony KDL-40EX620 with its competition by reading the reviews for the Westinghouse LD-4258, LG 42LK450, and Panasonic TC-L37E3. Learn more about LED-based LCD TVs by visiting our LED HDTV section.

Conclusion
With a current street price under $1,000, the KDL-40EX620 is targeted at the consumer who's not interested in 3D but does want the slim profile of an edge-lit design, as well as media streaming and other Web services. Sony's BRAVIA Internet Video platform is loaded with video- and music-on-demand services and many interesting apps. Yes, you can find a number of lower-priced LCDs around this screen size, but many of them don't offer all of the Web-friendly perks you'll get with the KDL-40EX620.