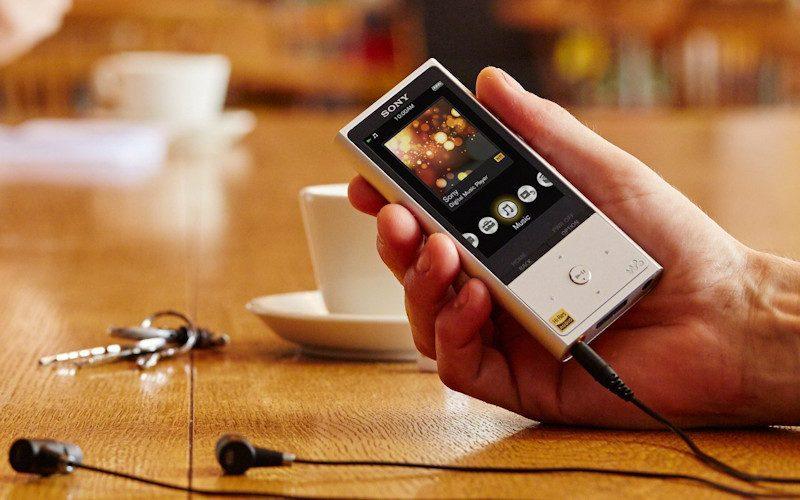 Portable players and headphones are currently the most competitive audio product categories. Every month sees a new contender for either the best-of-class, price-no-object category or the highest-value-per-dollar category. Sony's latest offering falls in the latter category. The NW-ZX100HN portable player ($699) even comes bundled with its own dedicated MDR-NW750N/MDR-NW750NE noise-canceling in-ear headphones. Created for people who require a player that is small, can play all digital formats, and can deliver long battery life, the NW-ZX100HN offers music lovers an alternative that is ideal for world travelers and others with highly mobile lifestyles.

Product Description
The NW-ZX100HN has a 5.11-ounce solid aluminum body that is almost the same dimensions as the Astell & Kern AK Jr. player, only slightly thicker. Unlike the AK Jr, which has a large Gorilla glass touchscreen, the NW-ZX100HN's 400x240 (WQVGA) display is plastic. Also, instead of a touchscreen, the NW-ZX100HN relies on a four-way navigation button system with a circular central "enter" button. On its right side, the player has volume-up/-down buttons, as well as a sliding "button hold" and covered slot for a microSD card. Currently the NW-ZX100HN supports a 128GB card to augment its internal 128 GB of storage, so its maximum storage totals 256 GB.

Long battery life is one of the NW-ZX100HN's highlights: it supports 70 hours playing MP3 format files and up to 45 hours with higher-resolution files. The NW-ZX100HN will play AAC, AIFF, DSD, FLAC, HE-AAC, MP3, and WMA files, with up to 24-bit/192-kHz PCM and 2.8M/5.6M DSD resolution (however, during playback DSD files are converted to PCM). The NW-ZX100HN also offers wireless Bluetooth operation, as well as active, adjustable noise cancellation with specified Sony earphones (including the supplied MDR-NW750N/MDR-NW750NE). The NW-ZX100HN has quite a few additional settings to enhance its sonic signature, including Clear Voice, S-Master, DSEE, and Dynamic Normalizer. I'll discuss their relative positives and negatives in the sound section.

Inside the NW-ZX100HN, you'll find Sony's new S-Master HX amplifier, which Sony claims extends and "fulfills high-frequency audio range to over 40 kHz." Although it converts DSD files to PCM, the player includes two different digital filters for DSD, as well as the option of setting the gain to either 0 or -3dB levels. Other features in the NW-ZX100HN include a machined aluminum body that provides high rigidity and mechanical reinforcement, along with a stainless steel base plate with copper and gold plating. Sony employs high-purity solder, conductive screws that Sony claims "results in lower impedance and better bass," film capacitors, a thick film copper foil printed circuit board, OFC cable in the headphone cable, and a dedicated clock source for 44.1 signals. 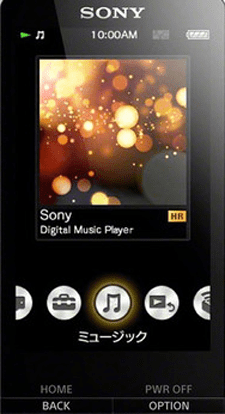 Ergonomic Impressions
Unlike some players that use an open Android system, the NW-ZX100HN uses its own closed proprietary system. This makes for a much simpler control interface, but it also prevents adding third-party apps or streaming services. In this respect the NW-ZX100HN has limited functionality--it's strictly a player, not a USB DAC, Internet radio streamer, or Wi-Fi node. The advantage of this "closed" system is greater reliability (with no third-party apps to brick the system) and optimization for the specific tasks for which it was designed.

Unlike many Android-based players, the NW-ZX100HN has a relatively simple and straightforward control interface. It powers up quicker than Android players; and, once powered up, it offers an easy-to-navigate control surface. Pushing the down button takes you into the setup functions, which are divided into Bluetooth, Noise Canceling, SD Card Settings, Settings, Music SenseMe Channels, and Bookmark. Pushing the up button puts you into the player mode. I could spend multiple paragraphs detailing each setup function; but, since this is a quick review, I'll sum them up by saying that the menus are more intuitive than I've seen from most players I've encountered.

Among the unique Sony features are the Music SenseMe Channels. I first encountered these on the Sony HAP-Z1ES. I was leery of this intelligent shuffle when I initially tried it, but after a few months the function proved to be one of my favorite features. Other special features include the ability to adjust the amount of noise cancellation and the degree of cancellation with Sony noise-canceling earphones. Besides three specific "environment" settings, the NW-ZX100HN has a "full-auto AINC" mode and a special "Quiet Mode" that lets you use noise cancellation even when you aren't playing music.

Other features that I personally found less useful included the ClearAudio+, Clear Bass, Clear Phase, Clear Stereo, Dynamic Normalizer, Equalizer (five-band), and VPT (Studio/Club/Concert Hall/Matrix), but you may find they have some entertainment value. On the other hand, the DSEE HX was a beneficial sonic feature that I found improved the sound from every headphone with which I used it.

Among the other ergonomic niceties worth noting is the slightly textured black pleather back, which has just enough grip to reduce the chances of the NW-ZX100HN slipping out of your grasp, and the cover over the microSD slot, which also has a tiny system restart button. Finally, the Sony NW-ZX100HN turns off as fast as it turns on.

Sonic Impressions
As with all portable players, the sound of the NW-ZX100HN is a result of the combination of the player and the headphones attached to it. At first I used the bundled MDR-NW750N/MDR-NW750NE noise-canceling in-ear headphones. The results were better than I expected. Especially in noisy public spaces, such as airports, I found that the combination of the player and the noise-canceling in-ear headphones made the time more pleasant. Even when on an airplane, I found that the noise-canceling feature did almost as good a job at defeating the high ambient noise levels as the custom in-ears I took on the trip. These in-ear headphones are lightweight, and the large silicon tips were a good fit.

I tried all the various sound-shaping features that the headphones offer, and in general I preferred the sound with most of them turned off. However, you may find the EQ useful with some headphones and in-ears. The "Clear Stereo" filter consistently altered the frequency response by slightly boosting the lower midrange, which with most headphones gave them a warm but hollow quality that I suppose could be an improvement with some cooler-sounding transducers.

While the NW-ZX100HN's sales materials don't promise that it can drive every headphone available, it did a good job with a majority of headphones I tried. Even with the Beyerdynamic DT-990 600-ohm version, the NW-ZX100HN had enough gain to play loud enough for my needs, although it was near maximum volume. With hyper-efficient in-ears like the Weston W-60, the player had ample power, and I found that I rarely got above 11 on the 1-to-100 volume scale.

With appropriate earphones, I never noticed any sonic shortcomings that I could lay at the feet of the NW-ZX100HN. Obviously, some more difficult-to-drive or power-hungry headphones, such as the DT-990 and the new Mr. Speakers Ether C (the Ethers aren't as difficult to drive, but they do benefit from a balanced connection), are not as good a match for the NW-ZX100HN as efficient in-ears like the Ultimate Ear Reference Remastered, Astell & Kern AK-T8i, Westone W-60, Empire Ears Zeus, Jerry Harvey Laylas, or NuForce HEM-8--all of which performed well when coupled with the NW-ZX100HN.

Comparison and Competition
There are plenty of portable players in the $300 to $700 price range, but I think the main competition for the NW-ZX100HN comes from the Astell & Kern AK Jr ($499) and the Pioneer XDP-100R ($699). The Astell & Kern has a slightly more compact form factor and a slick touchscreen interface, but it lacks the NW-ZX100HN's ability to interface or adjust Sony's noise-canceling headphones. Also the AK Jr. lacks the Sony's SenseMe intelligent shuffle feature. The Pioneer XDP-100R has a more open Android OS that allows for third-party apps and downloads, as well as Tidal, Spotify, and Pandora streaming capabilities. The Pioneer is also MQA-compatible. If future-proofing and an open architecture OS are important to you, the Pioneer may be a better choice. But if extended battery life for long trips is vital, the Sony NW-ZX100HN will come out on top.

Conclusion
When I travel, I'm constantly looking for ways to lighten my load. For world travelers, the NW-ZX100HN could be a perfect travel companion: it's light, it's compact, and its battery life is well above what you can get from other premium portable players. In airports and on airplanes, the NW-ZX100HN's noise-canceling ability with the bundled MDR-NW750N/MDR-NW750NE in-ears was flexible and impressive. Once in a place more conducive to serious listening, using a good pair of earphones, the NW-ZX100HN can deliver an immersive listening experience that rivals other top-shelf portable players.

Audio-Technica Offers Some Sound Advice for the Holidays