Two of 2010's horror hits, the ecstatically cheesy Piranha 3D and the zombies vs. kickass heroine sequel Resident Evil: Afterlife, both of which were released theatrically in 3D, are coming to Blu-ray in that format, courtesy of Sony Pictures Home Entertainment. 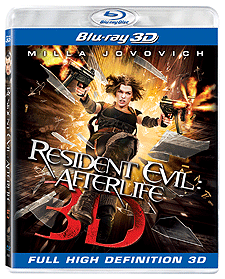 In a continued effort to offer 3D content for home entertainment systems, Sony Pictures will be releasing Resident Evil: Afterlife on December 28th and Piranha 3D on January 11th. Both of these films will be released on the 3D Blu-ray format.

In a world ravaged by a virus infection, turning its victims into the Undead, Alice continues on her journey to find survivors and lead them to safety. Her deadly battle with the Umbrella Corporation reaches new heights, but Alice gets some unexpected help from an old friend. A new lead that promises a safe haven from the Undead takes them to Los Angeles, but when they arrive the city is overrun by thousands of Undead - and Alice and her comrades are about to step into a deadly trap.

Also included on the disc is a teaser trailer for a new GC-animated installment in the Resident Evil franchise, Resident Evil: Damnation.

Related Articles and Content
In order to enjoy these movies in 3D, you'll need the right equipment.  Be sure to read our reviews for the Sony KDL-55HX800 3D LED HDTV and the Samsung PN58C8000 3D plasma HDTV.  Also, check out the reviews for Sony's PlayStation 3, which has recently received a firmware update to be capable of 3D playback, and Panasonic's 3D-capable DMP-BDT100 Blu-ray player.  For more information, visit our 3D HDTV and Blu-ray Player sections.

Piranha 3D
Every year the population of sleepy Lake Victoria explodes from 5,000 to 50,000 for Spring Break, a riot of and drunken fun. But this year, there's something more to worry about than hangovers and complaints from local old timers; a new type of terror is about to be cut loose on Lake Victoria. After a sudden underwater tremor sets free scores of the prehistoric man-eating fish, an unlikely group of strangers mush band together to stop themselves from becoming fish food for the area's new razor-toothed residents.

You can read Pierce O'Toole's Piranha 3D review on hometheaterequipment.com.

Special features on the Blu-ray include 10 featurettes, deleted scenes with optional commentary, deleted storyboard sequences, and a storyboard gallery.