Sony's steaming media player, the SMP-N200, seems to be quite the product. The new device gives users access to a huge variety of content providers. HomeTheaterReview.com reviewer Adrienne Maxwell takes a look at the features. 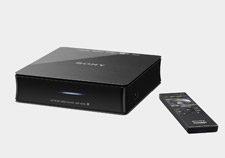 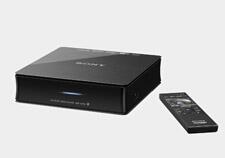 Just as LG has done with its Smart TV Upgrader, Sony has made the Web platform found on its HDTVs available in a standalone box, so you can enjoy all the company’s Web features on a non-networkable TV. The SMP-N200 ($99.99) is actually Sony’s second-generation streaming media player, a follow-up to the original SMP-N100 (now $79.99). We have not performed a hands-on review of the SMP-N200, but here is a more comprehensive look at its features. Sony offers a robust media platform that includes most of the big names, such as Netflix, VUDU, Amazon Instant Video, Hulu Plus, YouTube, CinemaNow, Pandora, Facebook, and Twitter. You also get access to proprietary Sony offerings like Video Unlimited, Music Unlimited, and the 3D Experience channel, as well as lots of other options like NPR, blip.tv, epicurious, Wired, and Flixster. A Web browser is also available. The box supports DLNA media streaming, and you can directly cue up media content stored on a USB drive.

The SMP-N200 has a small form factor, measuring 5.9 x 5.9 x 1.7 inches and weighing 0.9 pounds. The connection panel includes the expected HDMI output, but it also offers component and composite video for compatibility with older, non-HDMI-equipped TVs. You also get optical digital and stereo analog audio outputs, a side-panel USB 2.0 port, and an Ethernet port for a wired network connection. The box has integrated 802.11n, as well. A small, non-backlit remote is included; it features a clean, simple layout with navigation buttons, transport controls, and four color buttons, plus Home, Return, Options, Display, and Power buttons. There’s also an SEN button that takes you directly to the Sony Entertainment Network. Unfortunately, the remote lacks a full QWERTY keyboard, which would make it easier to input text when searching for content or using social-networking tools. Sony does offer a remote app for iPhone/Android smartphone users that includes a full keyboard.

The SMP-N200’s user interface is similar in layout and navigation to that of a Sony HDTV. It uses crossbar navigation, with the Home Menu options running horizontally and the sub-menu choices running vertically. The Home Menu icons are Setup, Photo, Music, Video, and Network. Within the Photo, Music, and Video menus, you can access you own DLNA/USB media content or select from the Web-based services that apply to that media type. The Setup menu offers more choices than you’ll find on some streaming boxes, including the ability to enable 3D playback (you can even adjust 3D depth), an A/V Sync control, and picture adjustments. In terms of personal media playback, the SMP-N200 offers better-than-average format compatibility, including MP4, WMV, Divx HD, MKV, AVC HD, MP3, WMA, AAC, and JPEG.

Read about the high points and low points of the Sony SMP-N200 on Page 2. 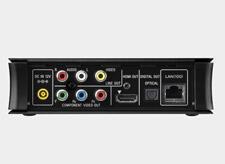 High Points
• The SMP-N200 includes access to the hottest Web apps, including Netflix, Amazon, VUDU, Hulu Plus, YouTube, Pandora, and more. It also gives you access to exclusive Sony services and many smaller, niche options.
• The box supports a 1080p resolution and Dolby Digital Plus sound via HDMI, but it also offers analog A/V outputs for compatibility with older gear.
• It has integrated WiFi and an Ethernet port, for a wired or wireless solution.
• The SMP-N200 supports DLNA media streaming and has good file-format compatibility.
• iPhone/Android control apps are available.
• When connected to a 3DTV, the box can pass streamed 3D content from Sony’s Video Unlimited and 3D Experience channels.

Low Points
• The remote lacks a full QWERTY keyboard for easier text input.
• The user interface is not as clean and intuitive as some of its competitors.
• Sony doesn’t currently have an Apps store to customize your services.

Competition and Comparison
You can compare the Sony SMP-N200 with its competition by checking out our reviews of the LG Smart TV Upgrader, Boxee Box, and Roku 2. Learn more about media players by visiting our Media Servers section.

Conclusion
On paper, the Sony SMP-N200 has it all–an extensive range of Web services, personal media streaming with good file-format support, analog outputs for compatibility with any TV, a smartphone control app with a QWERTY keyboard, integrated WiFi, and 1080p support. All for a price that’s competitive with the Apple TV, LG Smart TV Upgrader, and top-shelf Roku box. However, some early reviews suggest that the user experience is less than intuitive, compared with those other boxes. If you like all the things the SMP-N200 brings to the table, we recommend you give it a test drive to see the interface for yourself.