Want to truly recreate the cinema experience at home? You'll need what the pros and multiplexes the world over use-Sony's SRX-R220 4K projector. Featuring a native resolution of 4K, which is four times the resolution of HD, the SRX-R220 isn't cheap but then again the best never is.

The Sony SRX-R220 is the ultimate professional and home theater front projector, featuring an astonishing 18,000 ANSI lumens of brightness, ultra-wide XYZ Color Space, and 4k resolution (8.85 megapixels), and is seen by many as the logical replacement for 70mm & 35mm film projection in movie theaters throughout the world. With three different types of light engine technology (DLP, LCD, SXRD) to choose from, Sony made a commitment more than five years ago to SXRD (Silicon X-tal Reflective Display). They also decided to follow the standards established by the Digital Cinema Initiative group (DCI) for commercial movie theaters, pioneering the highest current projection resolution available, 4k (greater than four times 1080P HDTV). The result is a massive 691 lbs. column of metal and glass that stands five feet tall. It definitely requires its own projection booth (with a dedicated three-phase 240-volt power supply).

Additional Resources
• Learn more about 4k Video here from this tutorial...
• Read more top performing 1080p, 2k and 4k projector reviews from Sony Cinealta, Meridian, JVC, Runco, Christie Digital, Barco and many others.
• Read top performing screen reviews from Stewart Filmscreen, dnp, SI, Elite Screens and many others.
But when it comes to compatibility, this commercial-grade projector will produce fantastically rich, bright images from just about any digital source on the planet, including 480i up to 1080P and even beyond to 2160P (4k) at 24, 30, 48, and 60 fps, among others. However, you'll need a dedicated 4k DCI media server, or one of the new 4k professional cinema cameras from Dalsa or Red Industries, if you are to see the full resolution capabilities of this fine instrument. In an increasingly digital world, the lines between home theater and professional commercial cinemas are really only blurred by cost. A professional projector deserves a professional price: projector (SRX-R220 Body) $130,000, lens (five types) $30,000, LMT-200 media block (4k DCI RAID Server) $40,000 and Input Cards (four types) $5,000 each equals the $220,000 total price.

Not a projector for just anyone, nor just any home theater on a rainy Sunday afternoon, the SRX-R220 (and its smaller siblings, the R210, S110, R110, S105, & R105) is truly a top-end digital commercial movie theater projector, in competition only with a few other top-end projection products offered by Barco, Christie and NEC. Its real appeal can immediately be seen when using a screen over 10 feet wide up to 85 feet (given a minimum required light level of 14.5 foot-Lamberts - DCI movie theater specifications). This projector's immediate transparency, compared to any other commercially available home or professional front projector (regardless of price). sets it apart from the rest by leaps and bounds. The three SXRD 4096 x 2160P imaging panels, along with a truly serious Fujinon Cinema lens (of various throw distances), can display both a range of beyond photo realistic colors and super-fine details (even with today's highly compressed HD cable and satellite feeds) that were only previously seen by a select few viewing their films at the processing laboratories, such as Technicolor or Deluxe, and under ideal conditions. This laboratory-grade image quality gives you as the audience a level of fidelity and accuracy that makes everything look exceptionally realistic, pretty much with any digital source imaginable. This was simply impossible prior to this product's availability. A huge leap forward, if only affordable by the very rich enthusiasts and/or certain movie moguls, post-production houses and adventurous aspiring commercial cinemas. The SRX-S220's capabilities immediately allow any viewer to see just about everything there is about picture quality, and also makes available immediate side-by-side comparisons of 2K (and lower) resolutions, up to four at a time. This means you can watch four 2K or HD sources (like a baseball game, hockey, football and NASCAR) simultaneously. With this projector, you can become your own multiplex or sports arena, given enough different high-quality sources. While this may seem like just a novelty or pure over-indulgence, being able to experience several different programs at full (and true) HD resolution simultaneously can become very addicting, and amazingly satisfying. You can even surf the Web, play video games like PS3, Xbox 360, and the Wii, and yes, PC games like EverQuest and Call of Duty as well. Home movies and still photography take on an almost completely lifelike quality when seen via this 4K Lamborghini of front projectors. Once experienced in a properly calibrated environment, it is difficult to go back to even the very best Academy screenings (for the Oscar people) or IMAX presentations. It's that much better than anything you may have seen, even on the lots of the big studios on the left coast.

For a commercial movie theater, tickets must sell to fill seats, and just as in the 1950s, TV is keeping people at home with better and better image quality for less and less money. To compete, digital cinemas in the twenty-first century must be ahead of home theater quality, just as in the '50s. Given that current HDTVs are less than 2K resolution (1920 x 1080P), regardless of format (broadcast, disc and downloads), and that 2K movies are now becoming the commercial digital projection standard on nearly 6,000 screens in the world, you might ask, "Why spend the extra money apparently on just 4k resolution in comparison to 2k or 1080P, given those sources limitations?" In side-by-side tests, the 4k Sony projected images (even with an HDTV source), that consistently produce a much more transparent, palpable and immediate image, devoid of the pixilation, screen door or contour effects that are endemic to DLP and LCD technologies. When you companion such seamless resolution with extended color fidelity (36 bits worth), add in automated color space adjustments for the various different sources (XYZ, Rec. 709 & 601, inclusive) and offer enormous adjustable light output (in 10-percent steps across two different bulbs), it becomes clear even on smaller screens (like my 18 x 10.125 foot Stewart Snowmatte) that you immediately come face to face with the closest facsimile of film, television, photography, etc. yet projected.

Read The High Points, Low Points and Conclusion on Page 2 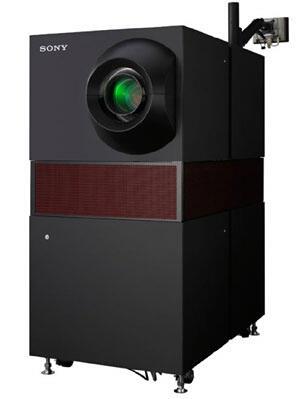 Low Points
• Color uniformity and balance are subject to change from temperature variations in the air intake specifically in projection booth.
• It is only designed for use on really large screens, beginning at 10 feet wide and extending to 85 feet diagonal width. Do not even consider this projector for anything smaller than 10 feet, even if you are rolling on crazy oil money in Dubai.
• The projector weighs close to 700 pounds, requires a dedicated projection booth (with three-phase power) and needs customized air intake and exhaust HVAC.
• Source signals (below 4k) can be processed only on selected types of input cards, or by using a dedicated external scalar, capable of 2k and/or 4k DCI output.
• Bulbs (2 - 4kw) only last about 800 hours, and cost $4,950 each.
• Uniformity, color temperature and gamma adjustment should be performed each time a bulb is changed to maintain optimal image fidelity.
• Adjustments are only available for top (Gain) and bottom (Bias) color temperature and only three gamma settings (1.8, 2.2, & 2.6) are available; these are not re-programmable.

Conclusion
While this is a singularly expensive front projector, as the flagship example for both Sony and DCI of what 4k can look like, it creates some of the most spectacular and transparent pictures of any projector yet created or deployed. If you have to see and even own the best possible image quality, you are hard-pressed to find a better projector than the Sony SRX-R220, albeit with a few minor quibbles. These include the need for a dedicated projection booth, short expensive bulbs (800 hours), variable white-field uniformity over time, and the need for steady recalibration to maintain stunning results. The quality of the viewing experience, however (over two-plus years), has convinced me this is a winner of a projector when absolute quality and repeatability are concerned. One must always balance the needs of budget vs. absolute quality and experience but, from a personal perspective, I would purchase the Sony 4k products because they let you see the real source more accurately than ever before, short of owning your own 70mm movie theater.

You'll automatically be entered in the HTR Sweepstakes, and get the hottest audio deals directly in your inbox.
Subscribe
Connect withD
Login
Connect withD
0 Comments
Inline Feedbacks
View all comments
Author
Jeremy R. Kipnis
HomeTheaterReview Product Rating
Value:
Performance:
Overall Rating:
When you buy through links on our site, we may earn an affiliate commission. Your support is greatly appreciated!
This is the static ad content. This is just a placeholder for now to get things styled.
Visit Website