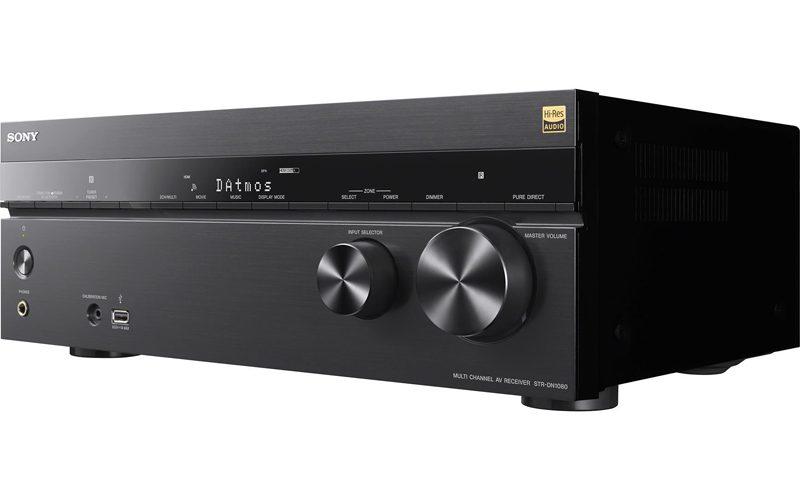 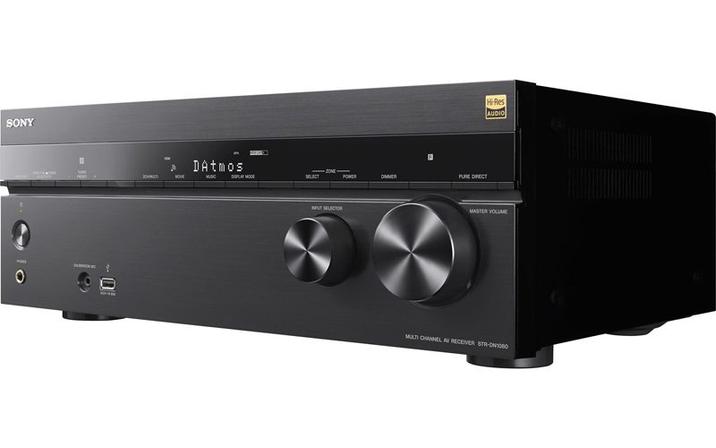 The STR-DN1080 ($499.99) is Sony's contender in the mid-priced AV receiver category. In this difficult market segment, Sony has to strike just the right balance of features and performance. Those of you who are familiar with the Sony lineup will recognize the STR-DN1080 as the successor to the STR-DN1070. The newer model notably adds support for Dolby Atmos and DTS:X. It has seven channels of amplification with 100 watts of power per channel at six ohms, 20 Hz to 20 kHz and 0.09 percent THD; the power rating climbs to a 165 watts per channel with only one channel driven and 0.9 percent THD.

The STR-DN1080 has a bevy of features, including built-in Wi-Fi (hardwired Ethernet is also available); Apple AirPlay; DLNA; Bluetooth with LDAC and NFC One-touch support; Google Home voice control; Spotify Connect; and Chromecast, which provides access to Pandora, Napster, Deezer, TIDAL, and more. You also get support for 4K, HDR10, and Dolby Vision pass-through, as well as hi-res audio playback--including DSD 2.8 MHz and 5.6 MHz and up to 24-bit/192-kHz in a variety of audio formats. If you end up streaming lesser-quality audio files, Sony's DSEE HX system upscales lower-resolution content to improve the sound quality.

This particular Sony receiver has relatively limited inputs beyond HDMI. With six HDMI inputs and two outputs that are HDCP 2.2 compliant and support pass-through of 4K/60p (4:4:4) video, this receiver can handle all of the HDMI-based sources you would find in just about any system. However, for non-HDMI sources, you are limited to three analog stereo inputs, two composite video inputs, and two digital audio inputs (one coaxial and one optical). The seven speaker outputs are complemented by a pair of subwoofer outputs. For the second zone, you get both speaker-level and preamplifier outputs. The back panel also has a pair of antennas, an Ethernet port, an FM antenna input, and IR input/output connections.

The Hookup
The Sony receiver was very easy to hook up. Its relatively compact size and 21.4-pound weight made it easy to move the unit into position. Connecting sources via HDMI was a breeze, as was connecting my speakers and subwoofer. The plus side of not having a ton of connection jacks is that there's plenty of room to get your fingers in and make the connections. Sony's graphic user interface was easy to follow, and I started my setup process by using Sony's "Easy Setup" system. My speaker setup consists of two B&W FPM 5s flanking an FPM 6 center up front and four of B&W's in-ceiling CCM80 speakers in the surround positions--with one pair in front of the main listening position and the second pair slightly behind it. Low-frequency duties are relegated to B&W's ASW610 powered subwoofer. I set up my speakers in a 5.1.2 configuration so that I could take advantage of the Sony's Atmos capability, but the receiver's amplifier section is flexible enough to be configured to power a 7.1 system, a 5.1 system and a second stereo zone, or a 5.1 system with bi-amped front speakers.

Sony eschews Audyssey in favor of its own proprietary DCAC EX auto calibration system. The DCAC EX system uses an unusually shaped stereo microphone that looks like a gently curved boomerang with a microphone at each end. DCAC EX's setup process is similar to that of most other systems in that it plays a series of tones as the microphone is placed in various positions, then it uses the information gathered to adjust the equalization and delay for each speaker. I played with the various equalization settings over a couple of weeks and ended up leaving the equalization off and changing some of the crossover settings selected by the DCAC system.

The Sony also has a "Phantom Surround" speaker option, which is said to create additional surround channels where no physical speakers exist in order to simulate a 7.1.2 setup with a 5.1.2 system.

The rest of the setup process consisted of making a network connection and configuring the Sony Music Center App. I downloaded the App to my iPhone and linked it to some streaming services to which I subscribe, such as Pandora, Spotify, and TIDAL. It was all pretty straightforward so long as you can remember your passwords.

Performance
The Sony STR-DN1080 was straightforward and easy to use. My family had no problem picking up the remote and using the system without any instruction. With video-based sources and the TV powered on, the Sony's clean menu made operation very simple. The iOS version of the Sony app was also easy to navigate, allowing access to most internal functions and streaming services. All the streaming services I tried worked without any crashes or other hiccups. Naturally, sound quality varied based upon the material being streamed. The DSEE system may have helped improve the audio quality of the lower-resolution files a bit, but I still preferred the sound of the higher-resolution audio files streamed from TIDAL or my NAS drive by means of the Sony's DLNA capability.


I watched a lot of television with my family through the Sony system while it was breaking in. I briefly tried the Phantom Surround Back setting, which created a virtual 7.1.2 system, but ultimately I preferred the 5.1.2 setting. We also watched Fantastic Beasts and Where to Find Them (Blu-ray, Warner Brothers), which is a movie my son introduced me to and we have now seen several times. The Atmos soundtrack really shined during the many scenes where the various creatures were wrecking havoc in 1920s New York City. The sound of falling debris and the more subtle rain sounds made much better use of my ceiling speakers than I get from my more traditional 7.1 setup.

The movie also features a good amount of special-effect sounds, such as the pneumatic tubes in the headquarters of the Magical Congress of the United States of America, as well as the sounds made by the magic wands. While I cannot attest to the accuracy of magic-wand sounds, the effects did a good job spatially tracking with the onscreen imagery. Most importantly, the dialogue was clear and easy to discern throughout the film.


Another movie I watched was Star Trek Beyond (4K UHD Blu-ray, Paramount), which I had recently watched in my reference system while reviewing Sony's VPL-VW675ES. This disc also features a Dolby Atmos soundtrack, so I compared the Dolby Atmos performance between the Sony receiver and that of my reference system--which is comprised of separate components that cost many times more. The 5.1.2 Atmos setup with the Sony receiver gave up some sense of space compared with the 5.1.4 Atmos setup in my reference room. This Star Trek movie has a lot of action happening at different heights, so the Atmos height speakers get a good workout. The extra two speakers in the 5.1.4 system did provide a greater sense of envelopment, but the difference between the 5.1.2 and 5.1.4 systems was much smaller than the dramatic difference between the non-Atmos 5.1 system and a 5.1.2 Atmos system. The reference system, not surprisingly, provided a deeper "look" into the soundstage, but the budget-friendly Sony receiver did a great job in rendering the many movie soundtracks we watched.

There is no doubt that the Sony is a capable performer with movies, but I would be remiss if I didn't discuss its music capabilities. Sony uses a proprietary preamp volume IC, glass-epoxy circuit boards for its amplifiers, higher-quality audio components, local analog power supplies for each digital device, improved chassis construction, and, for DSD fans, a DAC that provides DSD playback without conversion. The audio-related performance features are discussed in more detail on Sony's product page.


How do all of these audio components work together to provide improved performance? They work well. Listening to stereo music through the Sony, I could easily discern the difference in quality between the various streaming sources. The CD-resolution TIDAL streams took advantage of the Sony's capabilities, which unveiled the shortcomings of the lesser-quality streams (even with the assistance of the DSEE system). Mobile Fidelity recently sent me a few discs, including Bob Dylan's album Nashville Skyline. With "Peggy Day" (SACD, Mobile Fidelity/Columbia Records), the Sony sounded slightly cooler than my older Marantz SR8002 receiver, but the soundstage was very similar.

Imagine Dragons' "Believer" from the album Evolve (CD, Interscope) has been in heavy rotation in our household. I found that the Sony's presentation provided plenty of detail and punch, especially in the mid-bass region. No, the Sony receiver driving wall- and ceiling-mounted speakers cannot provide the same level of performance as high-end separates and floorstanding speakers, but Sony's attention to audio performance pays off--the receiver provided a lower noise floor and better detail than you would expect to find at this price point.

The vast majority of my time with the DN1080 was spent with it installed in the family room system described above, but I felt that I would be remiss not to give it a try with some reference-grade speakers like the Revel F208s or MartinLogan Expressions. The Revels proved to be a difficult load for the Sony, but it was able to drive the Expressions to moderate listening levels without any problems.

The Downside
Sony's STR-DN1080 should be able to accommodate most reasonably sized systems with HDMI-based sources, but the scarcity of non-HDMI inputs limits your ability to use legacy AV sources. The receiver's amplifiers have enough power to drive efficient speakers to reference volume levels; but, if you have more difficult-to-drive or less-efficient speakers, you may need to select a receiver with more robust amplification. The Sony ES Series receivers provide more input options and more power than the STR-DN1080.

There are numerous receiver options in the $500 price range. Yamaha's RX-V583 is also $499.99, has a power rating of 80 watts per channel, and features MusicCast multiroom streaming. I have not heard this particular unit, so I cannot comment on how it compares sonically.

The Denon AVR-S730H is priced almost the same as the Sony but has slightly less power at 75 watts per channel; it does feature built-in HEOS capability. The Denon relies upon Audyssey's MultEQ processing.

Conclusion
Sony's STR-DN1080 had no problems serving as the centerpiece of my family room system. My family enjoyed watching many television shows and movies using the 5.1.2 system. The Sony's sonic profile leans toward the cooler and more analytical end of the spectrum, which helps it reproduce multichannel soundstages with detail and clarity. The receiver's networking and streaming capabilities, coupled with the Sony Music Center App, provide many listening options without having to utilize external streaming devices. Lastly (and importantly), the GUI was intuitive and easy to operate. Overall, I found the Sony STR-DN1080 easy to recommend for use in a modestly sized, HDMI-centric system.