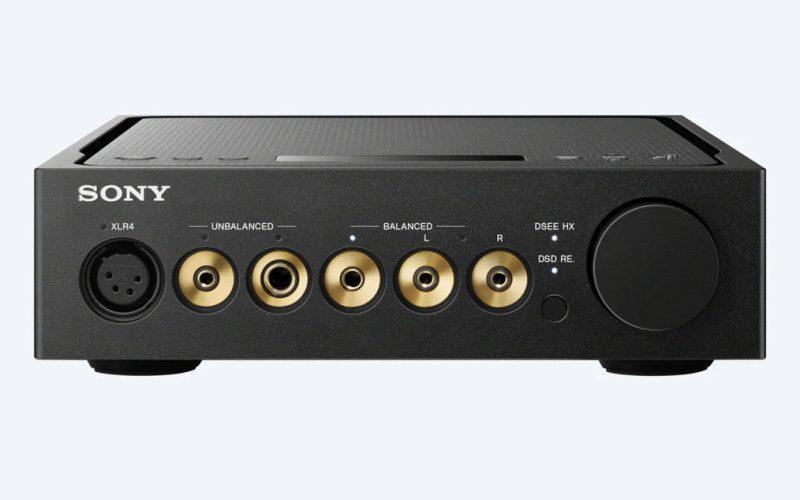 A little over a year ago, Sony unveiled three companion Signature headphone products. I reviewed two of them, the MDR-Z1R headphones, and the NW-WM1Z portable player, for The Absolute Sound, but I did not review the Sony TA-ZH1ES headphone amplifier and DAC preamplifier (MSRP $2199.99). The reason it was left out was not due to any fundamental flaws, but merely the fact that if it had been included the review would have dragged on like a bad multi-part romantic novel. So, the TA-ZH1ES never had its day in the sun, or at least proper time under my magnifying glass. I will attempt to fix that oversight now.

The Sony TA-ZH1ES is not only a multi-output headphone amplifier, but also a DAC and analog/digital preamplifier. Inputs include one analog RCA pair, one USB, one S/PDIF Coaxial, one Toslink connection, and a special “Walkman” input jack. The copious outputs include one pair of single-ended RCAs that can either be a fixed 2-volt output or variable via the volume control, one XLR4 jack, one stereo mini headphone jack, one standard 6.3mm single-ended headphone jack, one 4.4mm balanced headphone jack, and one pair of 3.5mm balanced jacks. With a total of seven output options, the Sony TA-ZH1ES can support every popular headphone termination scheme currently in use.

While most headphone amplifiers’ USB input sections are “courtesy” options that contain off-the-shelf integrated circuits that offer only the limited choices available for a particular chipset, the Sony TA-ZH1ES DAC section is as fully-featured as many standalone DACs. Within the DAC menu section, users can choose to employ DSEE HX, which upscales 44.1 and lower sources “to near hi-resolution sound quality.” It has six different options: off, standard, female vocal, male vocal, percussion, and strings. Another user-selectable option is “DSD Remastering.” This option converts PCM signals to 11.2 MHZ DSD. The Sony TA-ZH1ES DAC options also includes the “D.C. Phase Linearizer” circuit, which, according to Sony, “Lets you approximate the low frequency phase characteristics to a traditional analog amplifier.” It does this by changing the phase characteristics in the digital domain.

While the Sony TA-ZH1ES has an analog input, it is not an analog preamplifier and does not provide an analog pass-through. All analog sources are converted to digital and the user has the option of converting them into 48 kHz, 96 kHz, 192 kHz, 2.8 DSD, 5.6 DSD, or 11.2 DSD. So, if you require a preamplifier with a pass-through so that analog sources are not converted to digital ones, the Sony TA-ZH1ES is not for you.

The only ergonomic issues I found with the Sony TA-ZH1ES were ones of control and display placement. Because the only info display on the Sony TA-ZH1ES is on its top panel, you need to locate the Sony TA-ZH1ES so that you’re looking somewhat down at it. Also, some of the critical controls, including the source and output selector buttons, are also on the top panel, so the Sony TA-ZH1ES needs to be in arm’s reach unless you use the supplied remote exclusively. Yes, the Sony TA-ZH1ES comes with a small wand remote that lets you access basic control functions of input, output, and volume level. The remote also lets you turn on and off the DSD mastering and DSEE HX functions, so you can drive yourself nuts comparing

In terms of its ability to drive difficult-to-power headphones, the Sony TA-ZH1ES had no problems with the BeyerDynamic DT-990 600-ohm with a single-ended termination, with over 27.5 dB of gain still unused when in the low-sensitivity setting. The HiFIMan H-1000V2 with a balanced termination had 23 dB of unused gain. Switching to my most sensitive in-ears, the Empire Ears Zeus, the volume control was at -31 dB at normal listening levels. I heard absolutely no hiss when I muted the output with these and the other sensitive in-ears I used through the Sony TA-ZH1ES.

Performance
How does the Sony TA-ZH1ES sound? That question can only be answered with another question: “Which Sony TA-ZH1ES?” Depending on your choice of DAC settings, source, and headphones, the sound of the Sony TA-ZH1ES can be quite different. I mentioned earlier that the various filter, upsampling, and format options can drive you a bit batty comparing between them. If you are prone to “audiophile nervosa,” which is roughly defined as when a system’s choices and options drive you crazy, the Sony TA-ZH1ES may push you over the edge.

I’ve had a lot of time to compare all the Sony TA-ZH1ES’ various settings, and my only conclusion is that no particular upsampling rate or combination of upsampling, rate conversion, and “Linearizing” sounds consistently better than the others. That doesn’t mean that all the settings sounded identical or that they made no difference. But I did discover that no particular setting was universally better with all sources. On streaming sources, I found that if they were 44.1 or lower, they generally had slightly better focus and inner detail when converted to a higher sample and bitrate.

But with any source that was 96/24 or better, I was hard-pressed to hear any improvements from further upsampling. As for the PCM to DSD conversion, once more I found no robust universal results. Some material seemed superior converted to DSD while other tracks from the same source did not. If you’ve got a lot of spare time and really like difficult A/B sessions, you’re going to enjoy the Sony TA-ZH1ES options.

During the past months, I’ve used the Sony TA-ZH1ES as my reference headphone amplifier. I’ve put every headphone that I’ve reviewed through the Sony TA-ZH1ES and used it for many earphone A/B comparisons. I can switch from one headphone to another in under 10 seconds if they are not in-ears, which take longer–fifteen to twenty seconds to position. With the Sony’s 0.5dB volume adjustments and easy-to-read numeric volume read-outs, matching levels between earphones was also a simple and repeatable procedure.

Competition and Comparisons
Headphone amplifier DACs come in all sizes and prices, but no reference level components that I’m aware of have the same feature set as the Sony TA-ZH1ES. Most audiophile DAC/headphone units, such as the Audio-Technica AT-HA5050H, have a much higher price ($5995.00 MSRP) and in the case of the Audio Technica, lack some of the Sony’s features. The AT-HA5050H does not have provisions for balanced headphone connections. The recently-discontinued Cavalli Gold provided balanced outputs, but at a much higher price as well. The Luxman P-750u headphone amplifier ($4800 direct shipped from Japan) offers balanced analog inputs and outputs, but has no digital processing. The Questyle CMA800i has a similar price ($1999 street) and offers a sophisticated DAC section and preamplifier functions but doesn’t have the plethora of headphone connections or upsampling features.

Conclusion
If you’ve been a reviewer as long as I have, you begin to realize that for the vast majority of audio categories, there is no such thing as one essential component. In almost every product category, I’ve always found more than one viable option. But, so far, the Sony TA-ZH1ES has proven itself to be close to a one-of-a kind component. I’ve never come across a headphone amplifier with more output options or a DAC with more upsampling and format conversion choices. I’ve also never come across a DAC/headphone amplifier that can successfully drive a wider range of headphones. When you add its preamplifier functions you have a component that delivers an impressive number of features, flexibility, and overall value. Is the Sony TA-ZH1ES “essential” for any serious headphone fanatic? For me, that answer would be, yes.

You'll automatically be entered in the HTR Sweepstakes, and get the hottest audio deals directly in your inbox.
0 0 vote
Article Rating
Subscribe
Connect withD
Login
Connect withD
0 Comments
Inline Feedbacks
View all comments
Author
Steven Stone
HomeTheaterReview Product Rating
Value:
Performance:
Overall Rating:
Check Product Price
When you buy through links on our site, we may earn an affiliate commission. Your support is greatly appreciated!
This is the static ad content. This is just a placeholder for now to get things styled.
Visit Website