Soundcast has announced four additions to its VGX Series of outdoor speakers and accessories. The new VG10 portable Bluetooth speaker is the company's first model to support the DTS PlayFi wireless music platform. The VG3 (shown here) is a Bluetooth... 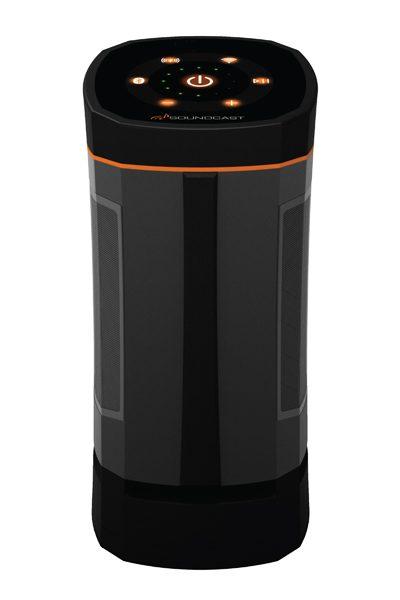 From Soundcast
Soundcast debuted four new products at CEDIA and achieved new feats of engineering, launching the VG10, the world’s first outdoor Bluetooth speaker with DTS PlayFi integration, and the world’s first outdoor Bluetooth speakers with capacitive touch interface, the VG5 and VG3. The company added three new high performance wireless audio systems in total to their VGX Series with the debut of the VG10, VG3 and VG5 and also introduced the VGtx, a Bluetooth transmitter.

VG10
The highly anticipated VG10 is the world’s first portable, outdoor Bluetooth speaker with DTS PlayFi technology. Pair the speaker with over 30 different interoperable speakers, sound bars and receivers in the Play-Fi ecosystem and enjoy high-quality lossless audio in any listening environment. Featuring 15 hours of battery life and the weatherproofing which Soundcast is known for, the VG10 enables listeners to utilize DTS PlayFi technology in the outdoors for the first time ever.

VG3
Featuring a capacitive touch interface to power the speaker off and on and a fuel-gauge LED array that shows power, battery and volume, the VG3 provides ultimate ease of use for consumers and marks an unprecedented feature set for an outdoor Bluetooth speaker. The VG3 is designed with two 1.5″ full-range drivers and a long-throw, down-firing woofer for rich, full reaching sound.

VG5
The flagship of the VGX Series, the VG5 encapsulates many of the beloved features of previously announced models including a capacitive touch interface, fuel-gauge LED array and weather-resistant exterior and presents an even richer soundstage. Powered by a long-throw, down-firing 5″ woofer and two 3″ full range drivers, the VG5 produces low-end booming sound to fill the expanses of any listening environment.

VGtx
Marking the first accessory Soundcast has released since the Bluecast, which enabled Bluetooth capability to their legacy products the Outcast and Outcast Junior, the VGtx is also in the Bluetooth space. The long-range transmitter enables speakers to extend beyond the standard 30 meters and increases to 50-meter transmission. The VGtx is accessible through a 3.5mm aux input.

“We studied the market extensively before launching the VGX series and arrived at the conclusion that consumers are looking for products that offer studio-type sound in the outdoors,” said Charity Hardwick, Vice President, Sales and Marketing. “The VGX Series embodies the notion that there shouldn’t be a need to sacrifice really rich audio for a rugged, weather-resistant enclosure.”

The VGX Series encompasses premium, powerful portable speakers with rich sound quality and the weatherproof materials for unbeatable durability that Soundcast is renowned for. The VG3 and VG5 join the first release from the series, the waterproof and ultra-lightweight VG1, which debuted in late 2016 and has been described as the perfect speaker to pack in carry-on luggage. Following this release is the VG7, which features 360-degree sound and a long throw down-firing woofer for booming low-end sound and crisp highs and mids translated through four full-range drivers. Designed with indoor and outdoor mode capability, the VG7 also sports a durable exterior equipped with shock absorbing and weatherproofing, creating the optimal audio performance for any environment.

The newest additions to the VGX Series are currently available for preorder and slated to ship Spring 2017. Preorder the VG10, VG5, VG3 and VGtx by contacting Soundcast at [email protected] and purchase the VG1 by visiting gosoundcast.com or amazon.com.