Can these little devices really make that big of a difference in the sound of your speakers? Terry London seems to think so . . .

After hearing my Lawrence Audio Cello speakers, one of my closest friends, Ted Brady, a very well-respected professional reviewer on all things digital for Computer Audio, insisted that I should audition a pair of Star Sound Technologies’ Sistrum Apprentice SP-SA-103 speaker platforms, retailing for $799.98 per pair. He had already auditioned the devices in his high-end reference-level system, and he strongly believed that using this company’s speaker platforms, instead of the provided high-quality spikes, would dramatically increase the performance of the Cello speakers in my system. I contacted Robert Maicks, designer/CEO of Star Sound Technologies, to set up the opportunity to review his speaker platforms and see what differences might be revealed. The Sistrum Apprentice SP-SA-103 turned out to be one of the most amazing upgrades I have ever experienced as a professional reviewer.

Each Sistrum Apprentice speaker platform is a quarter-inch-thick black steel plate. It is trapezoidal in shape, measuring 14 inches at the front and 10 inches in the back, with a depth of 14 inches. It has 11 grooves or fixed tracks laid out like a grid, seven of which are vertical and four of which are horizontal. With these different grooves, the platforms can accommodate many sizes of speakers and allow for precise positioning of three Audio Point speaker/floor spikes. Based on the depth and width of the bottom of your speakers, you choose the location of two Audio Point devices in the front and one in the rear to best balance and support the speakers. Then you place one Audio Point upward and screw in from beneath the plate the other matched Audio Point spike that will go downward into the floor. Matching coupling discs are provided to protect the bottom of your speakers or your hardwood floor. It is a two-person job to place your speaker on the Sistrum Apprentice platform. However, it is not difficult to do and takes no more than an hour to position both of your speakers.

Star Sound Technologies refers to the Sistrum Apprentice as a “geometrical mechanical grounding plane” that reduces the added and unwanted frequencies generated by the speakers, both internally and externally, along with spurious room vibrations that can travel back into the speakers’ enclosures and get in the way of allowing them to have a more natural sound.

The significant and positive changes to the performance of the Cello speakers that the Apprentice platforms created were very similar to what the Krolo Design Tomo Rack produced on my upstream components. Instead of using specific musical selections, I will describe what I heard during my auditioning, regardless of the genre of music. The noise floor of the Cello speakers, already being very low, dropped that much more, with the result that micro-details and decay trails became more apparent and natural. The Cello speakers have a very high level of natural timbres/tone that became even more pure and organic with the Apprentice speaker platforms. The Cello speakers’ bass frequencies, when placed on the Apprentice, became tighter, faster, and more accurate, yet the Cellos’ bass frequencies stayed harmonically rich. Prior to their placement on these platforms, the Cellos produced one of the largest and most precisely layered soundstages I have ever heard. But after placing them on these platforms, the speakers disappeared into their soundstage breathtakingly well. As I continued to audition them, their wonderful effects allowed me to relax that much more into the music and experience a higher level of emotional attachment with each musical piece.

Click over to page two for the High Points, Low Points, Competition and Comparison and Conclusion . . . 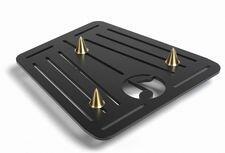 • The Sistrum Apprentice speaker platforms are constructed of high-grade materials and are well built.

• The overall sonic improvements that these platforms create – more natural timbres, tightening of the bass frequencies, powerful overall dynamics and speed, and transparency with easy-to-hear micro-dynamics and decay trails – can raise the performance of any speakers that would be placed on them.

• Setting up the Apprentice speaker platforms is rather straightforward and takes little time or effort. Remember, it is a two-person job to ensure the safety of your speakers and the correct positioning on the platforms.

• Putting your speakers on these platforms will raise them 3.3 inches off the floor, which could pose a concern if you have active children around them.

Prior to auditioning the Star Sound Technologies Sistrum Apprentice speaker platforms, the performance of my Lawrence Audio Cello speakers was already at a very high level with their stock spikes. I was completely astonished with the significant sonic improvements that took place after putting the Cello speakers on these platforms. After a short period of time, I knew that that these platforms were not going back to Robert, and I purchased the demo pieces. Even if these devices cost triple the amount of their suggested retail price, I would still consider them a great bargain. I highly recommend auditioning these platforms with your speakers to unlock what might be the speakers’ true potential.