With its pearwood body, alnico magnets, moving coil design, and elliptical stylus made from long-grain boron the Pearwood Celebration II is "magical" with superb front to back depth and excellent bass control, and a glorious midrange. Is it worth its cost? You betcha! 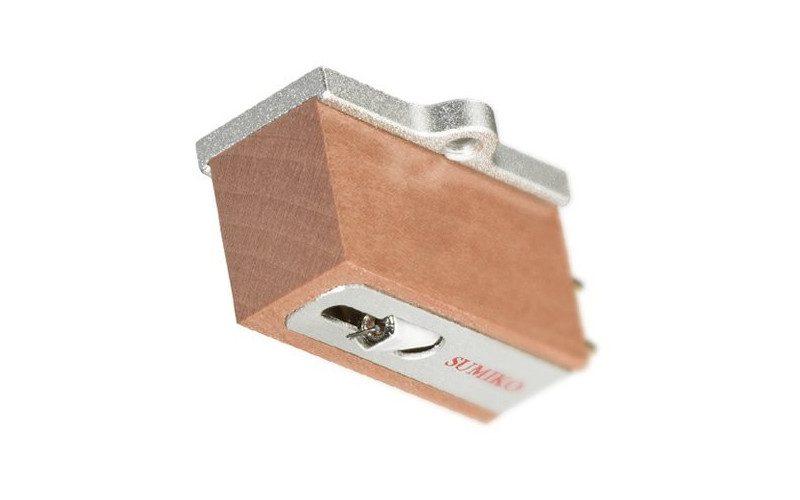 Wooden-bodied cartridges have always - since my first taste of Koetsu - charmed the hell out of me. I remember lusting after a Mr. Briar, a Grado Reference is never far from my headshell, and Koetsu, well, this brand remains for me the moving-coil of choice. So Sumiko(which also distributes Sonus Faber in the USA and thus has an appreciation of Things Timbered) was singing my song when it chose to mark a quarter century not with the silver of a wedding anniversary but with a lovely block of pearwood.

Sumiko's Pearwood Celebration II is a traditional moving-coil design in that it's low-output and uses an elliptical stylus instead of some trick profile. In this respect, the historical element is correct because (if my memory serves me well) Sumiko started out by distributing Japanese moving-coil cartridges, at a time when nearly all m-cs were low output types. Thus, if an anniversary model is to commemorate previous efforts and happens not to be a replica per se, then the Celebration sets the right tone. Moreover, beyond the shape and the stylus, the Celebration is as modern as it gets.

If you spring for this little masterpiece, spend a good 20 minutes reading the superb booklet before removing the cartridge from its little cedar box. Its text walks you through the design story and set-up procedure better than any cartridge manual I can recall. For the sake of brevity, then, let me just tell you that the cartridge has an output of 0.5mV, an internal impedance of 30 ohms and a load impedance of 1k ohm. The output, though low, was enough to drive the little NAD head-amp such that I could use it through Roksan's Caspian integrated amplifier without swinging the volume control much past the 11 o'clock position for normal levels. On the other hand, some who need more wallop will prefer this with a step-up; it adores the EAR 834P.

Sumiko selected Alnico magnets for the Celebration, with the front yoke pressure fit against the magnet. The cantilever itself is made from long-grain boron suspended by a special synthetic rubber material, while the aforementioned elliptical stylus is made from a low mass PH diamond said to be the most costly available - despite the lack of a tricky profile. Its perfectly cubist body helps the eye determine azimuth and rake angle.

Read more about the Pearwood Celebration II catridge on Page 2.

With the above recipe, you guessed correctly if you assumed this was easy to install. Well, almost. Its total weight of 7g was too light for the SME Series V without the use of added mass at the headshell, while the cartridge wears tiny pins at the back necessitating the crimping of the tags on some tonearm leads. Worst of all, some putz put the wrong size Allen key in the bag, so I had to find the right one in my typically chaotic tool box. The good news is that the bolts go straight into the solid metal top-plate fixed to the upper surface of the wooden carcase, so nuts are not required below. Factor in those parallel sides, and you can almost forgive the designer for hiding the stylus under the body, with no viewing slot or Denon-like line drawn at the front.

Auditioned in both a Rega arm (on a Basis 2000) and the SME Series V on the SME 10, the Sumiko defies exhortations about run-in: it sounded magical straight out of the box. This cartridge has the uncanny knack of making solid-state equipment sound tubed, of making metal tweeters seem soft-domed à la mid-1970s BBC designs, and of caressing a voice like a honey-lemon mixture attacking a smoker's rasp. From Willie Nelson to Art Garfunkel and every texture in between, the Celebration, uh, celebrates vocals. At the same time, it exhibits so little tracing activity that super-sweet instruments gain no grating hints of edginess, or whatever the anti-vinyl brigade insists is present on all LP playback.

A track which made me stop in my tracks (groan...) was 'Georgia', on Classic Records' reissue of Willie Nelson's . The harmonica? Real and in the room. Willie's slight nasality and tremor? All present and correct. But the magic came not in the voice or the instruments, but the slight echo and air around the vocal. It's one of the best displays of 'atmospherics' I've heard since the original Koetsu Urushi. Take it as a given that this cartridge resolves space, especially front-to-back depth.

Almost as a bonus - given that everything else is so good, how could you demand more? - the bass is near perfect by my admittedly old-fashioned criteria. This cartridge lacks the kind of crunch or slam which will make it the transducer of choice for those who worship 12in singles. But when I listened to Classic's remastering of S&G's , the bass extension and control - from 'Cecilia' to 'Baby Driver' - added a weight I'd forgotten about, having always considered the LP a bit 'feathery'. Boy, was I wrong.

In an age where DVD-Audio and SACD loom large, where MP3 is doing its best to create a generation of listeners nurtured with lowest-common-denominator noise, it's hard to recommend a cartridge costing 995 to any but you, the converted. So it's time we got selfish and said to hell with the Philistines. Sumiko probably couldn't make enough if word ever got out that the Celebration is simply so nice that it's like aural comfort food. I loved it.