Subwoofer Reviews, Equipment Reviews
Published On: March 12, 2022
We May Earn From Purchases Via Links

The newest SVS subwoofer is a departure from their prior designs and is their smallest subwoofer yet. 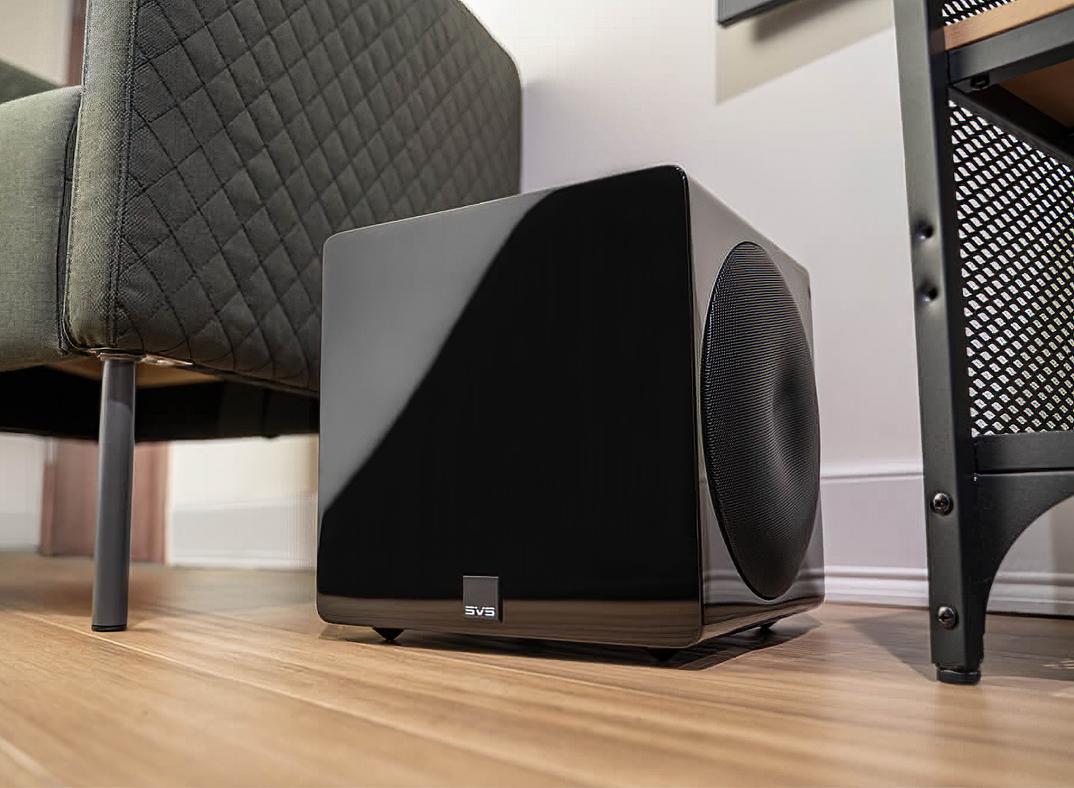 The newest SVS subwoofer, the 3000 Micro ($899.99) is a significant departure from their prior subwoofer designs. HomeTheaterReview.com has reviewed several SVS subwoofers, including my prior review of the SB-4000, and all of those subwoofers featured a single driver. The 3000 Micro utilizes dual eight-inch drivers in a horizontally-opposed, force-canceling fashion, one on the left side and another on the right. For those of you who are car aficionados, think boxer engine configuration with horizontally opposed cylinders.

In addition to the driver new configuration, this is also the smallest subwoofer made by SVS, hence its mokiner. The SVS 3000 Micro subwoofer measures 10.9 inches high, 11.7 inches wide, 10.7 inches deep, and weighs 22.5 pounds. We were very curious to hear how this diminutive dual-opposed driver sub sounded operating within its performance envelope and what its limits would be.

The dimensions alone do not convey how compact the subwoofer really is. You will need to look at the photographs accompanying this article to get a sense of scale. My review sample was finished in Piano Gloss Black, but Piano Gloss White is also offered as an option, which should help it disappear in lightly colored minimalistic finishes which are popular with modern interior designers.

The paint finish is mirror-smooth and the metal grilles are contoured with a raised ring around the outer edge of the grille—perhaps this provides extra clearance for the driver at full extension. Fit and finish are top-notch. The front of the subwoofer has a small SVS badge at the bottom center and overall, the aesthetic is clean and minimalistic—all buttons and connections are on the back panel.

The dual eight-inch active drivers are powered by an 800-watt (2,500-watt peak power) Class-D, Sledge STA-800D2 amplifier which also features an advanced Digital Signal Processing package. Frequency response is stated as 23-240Hz, +/- 3dB. The amplifier can be found on the back of the subwoofer and has an IEC power cord port and power switch next to a pair of single-ended inputs and outputs, a USB port, and a 12-volt trigger input. Just above the connections, there is a horizontal row of led lights with three pairs of buttons to control phase, low pass point, volume, and automatic turn on.

I tried the 3000 Micro with two different pairs of speakers: A pair of stand-mounted JBL HDI-1600s driven by the NAD C338 and then the NuForce S1 speakers and Icon amplifier, a small desktop system. The JBLs are mid-sized stand-mounted speakers with 6.5-inch woofers that reach down in the low 40Hz range and the NuForce system has small, 3.5-inch drivers and very limited bass capabilities.

Playing Donald Fagen’s “Morph the Cat” from the album of the same name on Qobuz (Reprise, Qobuz) through the JBL HDI-1600s without any subwoofer the bass guitar and drums were well defined. The JBLs could be played at loud volumes with no apparent stress, the bass rolled off cleanly. When setting up the SVS Micro, I ended up placing it slightly behind and to the inside of the left speaker. The SVS App and REW made it easy to get a smooth transition. With the SVS Micro 3000 supplanting the JBL speakers, the bass guitar and drum notes remained well defined with the same texture and detail as the JBLs alone but had additional weight and extension, this was especially noticeable at higher volumes.

I then played “Morph the Cat” on the less capable NuForce speakers. Without the SVS Micro 3000, the NuForce speakers were anemic, the bass guitar notes were thin and reproduced with little weight due to the extreme roll-off below 100Hz. The setup with these speakers took a bit longer but the results were well worth it. While the SVS Micro 3000 could not improve the midrange and treble clarity of the NuForce, it was able to provide another two octaves or so of bass extension.

Without the subwoofer, you could tell there were bass notes being played on the guitar and drums but with the SVS Micro 3000 in the system, I could clearly hear the bass guitar notes and drum hits. Not only did they blend in with the vocals and higher frequency instruments, but the drums and bass guitar also sounded natural. Due to the higher crossover frequency, there was some localization at first but because the subwoofer is so small, I was able to place it on the far side of the desk, eliminating the localization problem. The limited extension of the NuForce speakers made the addition of the Micro 3000 even more dramatic than with the JBLs.

The dual drivers and powerful amplifier can significantly increase the bass extension of many smaller to mid-sized speakers, but physics is a set of laws, not suggestions, and the Micro 3000 has its limits. Using the JBLs, I player “Deeper” by Peter Belasco (Tidal, Nashville Catalog) with its synthesized bass lines that transition in frequency. I played this same track again but using the much larger SVS PB-4000 subwoofer instead of the Micro 3000. While both subwoofers were easy to integrate with the stand-mounted speakers, the PB-4000 had noticeably more energy below 30Hz. So, if you’re a bass head and have the room for a larger subwoofer, there is no replacement for displacement. (Sorry, I could not resist.)

I have not heard KEF’s KC62 ($1,500) which features dual 6.5-inch drivers in a slightly smaller enclosure but is said to extend down to 11Hz, albeit at a significantly higher cost. Another size conscious option is the Rel Series T/5x ($679) and Tzero MKIII ($449) which flank the Micro 3000 in size, single driver, and less low-end extension. These subwoofers feature Rel’s unique high-level inputs which can be a polarizing topic. Many swear by them, and some swear at them. Thankfully, they also come with traditional low-level inputs if you fall into the latter category.

It would be easy to look at the SVS Micro 3000 and classify as a “lifestyle subwoofer” but that would be a mistake. The Micro 3000 is small in size, but not performance. There is no doubt that a larger subwoofer can move more air allowing to play louder and deeper, and likely deliver more decibels per dollar, but larger enclosures may preclude one of the best features: The SVS Micro 3000’s small enclosure size makes it easy to find a place for it.

The quick transient performance makes it easy to blend into many systems where physical constraints would preclude using a larger subwoofer. This subwoofer is a great option where additional extension is desired from a smaller, bass-limited speaker—or for your LFE channel in a surround-sound setup—with minimal impact on your living space.

I reviewed the SVS 3000 Micro subwoofer for AVS Forum last year, and concur with Brian's review that it is a great performer. From my perspective, as a fan of dual-opposed designs, it is an important subwoofer. It offers significant value among all compact subwoofers because you will not find a quality dual-opposed sub that costs less.

The 3000 Micro is not just small, it is also light enough to pick up and move easily, and that makes trying difference placements all that much easier. Depending on the setup, for example, in a living room that has a nice AV system, going with multiple 3000 Micro subwoofers may offer the best combination of performance and lifestyle-friendly design. It's not the sub you'd buy to put behind the screen of a dedicated home theater, but it is a sub where you can tuck a few here and there and get tight, even bass response throughout the room. It's hard to do that in a low-key manner without resorting to in-wall subs, which by definition are not moveable.

If you have room to accommodate a larger subwoofer, the 3000 Micro might not make sense. But when space constraints or aesthetic demands justify paying a premium for compactness, among its peers the 3000 Micro has little competition. It is a lifestyle-friendly way to add the benefits of a dual-opposed design to your stereo or surround-sound system, with the fidelity needed to add realism and heft to music, movies, and video games. I live in an apartment and appreciate the balance SVS achieved. That's why it is a Home Theater Review Editor's Choice for a compact subwoofer under $1000.

Find the SVS Subwoofer that's Right for You!