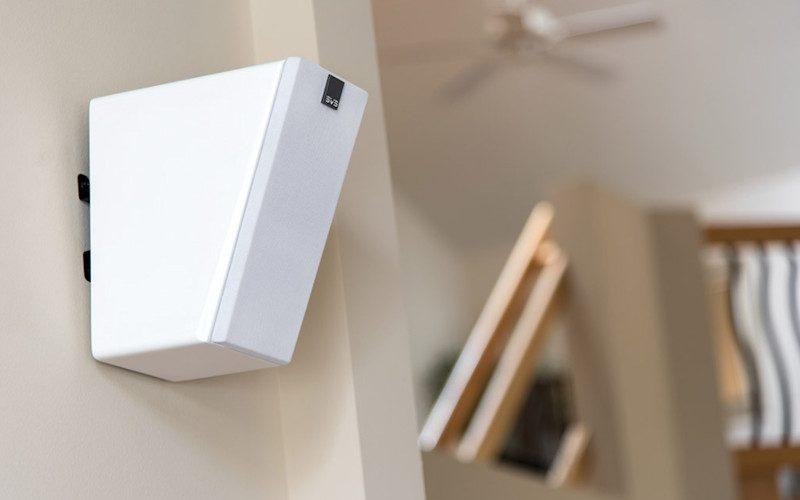 In a perfect world, all HT enthusiasts would own perfectly proportioned theater rooms where all speakers can be placed in the perfect position, at the perfect height. Sadly, our world is far from perfect, and so are most of the... 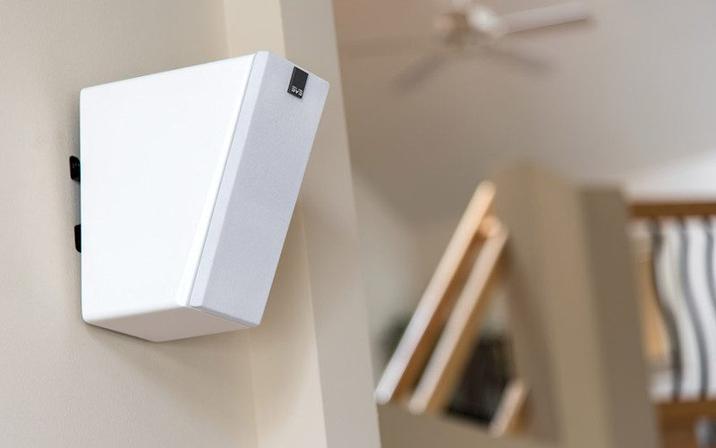 In a perfect world, all HT enthusiasts would own perfectly proportioned theater rooms where all speakers can be placed in the perfect position, at the perfect height. Sadly, our world is far from perfect, and so are most of the rooms in which we want to set up our home theater systems. Compromises are inevitable, and sometimes you've just got to be flexible.

Well, flexibility is the name of the game with SVS's new Prime Elevation satellite speaker, which shares the same driver configuration as the excellent Prime Satellite speaker that Myron Ho reviewed last year--a one-inch aluminum dome tweeter and 4.5-inch polypropylene cone woofer--but places the drivers on an angled front face that allows you to position the speaker below or above the ideal height for that location.

As the name suggests, the Prime Elevation's primary function is to sit high on the wall and serve as a height-effects speaker in a Dolby Atmos/DTS:X setup. The package includes wall brackets to mount each speaker on the wall with the drivers angled directly toward your seating area. Thus far, the two main approaches to incorporate height channels are to use either in-ceiling speakers directly overhead or up-firing Atmos modules that sit atop your main speakers and bounce Atmos sound effects off the ceiling toward the seating area. Most reviewers I know will tell you that the more directional in-ceiling approach is more accurate and effective, but not everyone can or wants to install speakers in their ceiling. The Prime Elevation is designed to strike a compromise--offering a more direct sound than the up-firing module but in an on-wall form that's less invasive than the in-ceiling approach.

But hey, that's not the only role that the Prime Elevation can play in your system. You can use this versatile little speaker for any channel, in any instance where you can't position your speakers at the optimal height. Let's say you've got little ones running to and fro and you want to get your whole speaker system high up off the ground without going the in-wall route. Or perhaps you want to set a front L/C/R array in a cabinet below your TV or screen, but the shelf is lower than you'd prefer. The Prime Elevation is up (or down) to the task.

Each Prime Elevation speaker weighs just 7.8 pounds and measures 9.25 inches high by 5.44 wide by 7.88 deep at its thickest. The speaker has a one-inch round port on its backside, where you'll also find a single set of gold-plated five-way binding posts. The Prime Elevation costs $199.99 each in the same Black Ash wood finish that comes standard on all of the Prime speakers. For an extra $50, you can get a piano gloss black or gloss white finish. SVS sent me a pair of speakers in piano gloss black, and they really look nice--and feel solidly constructed. The angled face is covered by a cloth grille that pops off via a pin/cup system, and one nice touch is that you can easily rotate the SVS logo on the grille so that it's upright no matter how you position the speaker.

I've been looking to add height speakers for a while now to finally make use of the Atmos soundtracks on all the new Ultra HD Blu-ray discs I've been adding to my collection. I have absolutely no desire to cut into my ceiling, so I was anxious to hear how well the Prime Elevation speakers perform in a height role.

Before mounting the two speakers high up on my wall, though, I decided to try them out in a more traditional role as part of a 2.1-channel setup. I mated them with my RBH sub and ran some music and movie demos from my Oppo BDP-103 player through an Onkyo TX-RZ900 receiver. The speaker is rated down to 50 Hz, but that seems overly ambitious; after some experimentation, I settled on the tried-and-true 80-Hz crossover point and found it to be a solid blending point with my sub.

I've gotta say, as I moved through my standard arsenal of AIFF tracks, I was thoroughly impressed with the way these little guys handle music, producing a rich, full sound that was far bigger and more open than I expected. Even with a highly dense track like Peter Gabriel's "Sky Blue"--which often sounds compressed and harsh through small speakers--the Prime Elevation brought out many of the subtle nuances and background details, and it didn't feel cramped while doing so. Rock tracks like Rage Against the Machine's "Bombtrack" had good immediacy and kick, while songs that can sound quite harsh and bright through smaller speakers--like Chris Cornell's "Seasons" and Junior Kimbrough's "Junior's House"--sounded clear and open without excessive bite up top.

Likewise with movie demos. Even in a 2.1-channel setup, these speakers admirably reproduced action movie scenes like The Matrix's Lobby Shooting Spree, offering good dynamics and a larger-than-expected soundstage. I was impressed with how much of the scene's background music came through (often, its almost completely lost in small speakers)--and with how clean and pure the bullets and ringing shell cases sounded. The Prime Elevation also performed admirably in the role of center channel, delivering both male and female vocals with a good sense of naturalness and intelligibility. I first had to mount the speakers up on my wall. SVS supplies everything you need except a drill and screwdriver, and the owner's manual provides clear instructions, as well as illustrations of recommended wall placements. Using the supplied paper template, you can mark where to drill holes in your wall for the four screws that hold each wall bracket in place; then you position the bracket and insert the screws. A separate speaker bracket attaches to the back of the Prime Elevation with a single screw. The final step is to connect your speaker wire and insert the speaker into the wall bracket.

That all sounds simple enough on paper, but I encountered a couple issues. Because I could not locate my stud finder (oh the irony), I decided to use the supplied plastic wall anchors (rated to hold 10 pounds). Of the eight screws I needed to put in the wall to hold the two brackets, four of them got stuck halfway into the anchors and would not go forward or backward. I don't know if this was user error or a quality control issue, but it was source of great consternation. I recommend you avoid the anchors if you can.

Once the wall brackets were in place, I went to slide the speakers into them. The first one slid right in without issue, but the second one would not catch hold and stay in the bracket. I just so happened to have an extra set of the speaker brackets, so I swapped in a new one, tried again, and the speaker slid right into a place.

After configuring my Onkyo receiver to add the two height channels for a 5.1.2 setup, I was ready to try out some Atmos content. My friend and fellow AV writer John Sciacca has compiled a list of 11 great Atmos demo scenes for his blog, and I happened to own a number of the Blu-ray discs--including The Gravity Diamond Luxe Edition, Jupiter Ascending, The Divurgent Series: Insurgent, Mad Max: Fury Road, San Andreas, and Mission Impossible: Rogue Nation. So I went to work.

The addition of only two height channels made a surprisingly big difference in my system. It was easy to hear the Prime Elevations' contributions in the height plane. They definitely made the soundstage seem higher and more immersive, and there was more cohesion in the sounds moving around the back half of the room.

In certain cases, the Prime Elevation speakers couldn't place the effects as precisely as you'll get with overhead in-ceiling speakers--such as the scene in Insurgent when Jeanine is talking to Tris, who is enclosed in a glass room, through a speaker. By all accounts, Jeanine's voice should move from the center channel to directly overhead, based of POV shifts in the scene. With the Prime Elevation speakers on the sidewalls, the location of the overhead dialogue was more amorphous and vague; however, I still clearly got the intent of shifting perspective.

Overall, the Prime Elevations did a great job re-creating the sense that objects were swirling around or falling from above--like falling debris and attacking spaceships from chapter three of Jupiter Ascending or alarms clanging all around in Gravity. The addition of just two direct-firing height speakers really helped to fill in the soundstage and add that extra level of fun and immersion that Atmos promises.

High Points
• The Prime Elevation's angled design allows you to position it higher or lower than a traditional satellite speaker, to suit your room's needs.
• The Prime Elevation offers clean highs and a solid midrange, and it can produce a larger, more open sound than you'd expect from a speaker this size.
• In the role of height speakers for Atmos and DTS:X, the Prime Elevation definitely elevates the soundfield and produces a solid level of precision in re-creating the height effects. Plus, the Prime Elevation is voiced to match the other Prime speakers, so you can easily add it to an existing Prime system.
• The wall-mounting process is clearly detailed in the owner's manual, and SVS includes all the hardware you'll need.

Low Points
• I had some issues with the wall-mounting hardware provided (see above).
• There isn't much space behind the wall bracket to accommodate banana plug speaker terminals (it's about 0.75 inches); you'll probably need to use spade lugs or bare wire.

Comparison & Competition
The competition for the Prime Elevation really depends on how you plan to use this versatile speaker. If you're going to use it as a height speaker, then there's no shortage of $200-apiece in-ceiling speakers that would compete, from companies like Polk, Definitive, Klipsch, PSB, Niles, Sonance, and others. Another competitor would be an up-firing Atmos module like the Onkyo SKH-410 ($150/pair), the Elac Debut A4 ($230/pair), the Klipsch RP-140SA ($400/pair), or the PSB Imagine XA ($500/pair).

If you're going to use the Prime Elevation in a more traditional role as left/right, center, or surround speaker, again you'll find a ton of options at this price point--but I can't think of another quite like this one, designed for high or low placement, at this price. If you don't need to position your speakers unusually high or low, you might look at the basic Prime Satellite instead, which has the same drivers but carries a lower starting price of $135 each.

Conclusion
SVS has another winner on its hands with the Prime Elevation speaker, and kudos to the company for thinking outside the box to consider the needs of those who don't have the perfect listening space. This little guy can wear many hats...and wear them well. Whether you're looking to build a new sub/sat system for stereo and multichannel listening or you just want an easy way to add a couple of Atmos speakers, the Prime Elevation delivers high performance at a highly affordable price.