TCL has announced plans to introduce 11 new Roku TV models in the first half of this year, including the entry-level 3700 Series (shown here) that will arrive within the month. The 3800 and 3850 Series are expected by mid-year.... 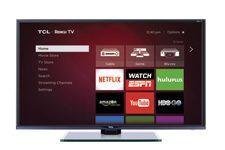 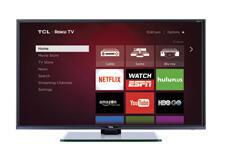 From TCL
TCL unveiled its Roku TV line-up for the first half of 2015. In partnership with Roku Inc., TCL will bring to market 11 TCL Roku TV models across three new series: 3700 Entry-Level Series, 3800 Design Series, and the top-of-the-line 3850 Decorator Series. Roku TV continues to further its position as a leading Smart TV experience with more streaming channels, easier navigation, and a comprehensive and unbiased search.

Launched to industry acclaim in August 2014, TCL Roku TV received several industry awards including the “Best TV of 2014” and “Editor’s Choice” from PC Magazine for the 4610 series. The 3700 series will be a refresh of that award-winning model and will be available in retail later this month. The 3800 and 3850 Series will launch later in the second quarter, with more details to be announced shortly.

TCL Roku TV features a personalized home screen with access to all entertainment sources, making it easy to navigate between gaming consoles, cable or satellite box, and more than 2,000 streaming channels. Roku continues to enhance its industry-leading streaming platform by constantly adding new channels and features for its customers. As an example, all TCL Roku TVs now include the Sling TV and WatchESPN streaming services.

3700 Series
The TCL Roku TV 3700 Series is a refresh of the 4610R models that sold through faster than expected at major retailers. The TCL Roku TV 3700 Series will arrive at retail later this month in three sizes: 32″ model 32S3700 ($219 MSRP), 48″ model 48S3700 ($429 MSRP) and 55″ model 55S3700 ($598 MSRP). The 48″ and 55″ models feature Full High-Definition (1080p) resolution for exceptional clarity and an advanced 120Hz refresh rate for watching fast-moving sports and action scenes. All models include three HDMI inputs, enabling consumers to connect and access all of their favorite devices with one click from the personalized home screen.

In addition, TCL announced at this year’s Consumer Electronics Show in January that it’s working with Roku to develop 4K TCL Roku TV models in the future.