"My name is Inigo Montoya. You killed my father. Prepare to die." "Never get involved in a land war in Asia." "Have fun storming the castle!" Even if these lines don't immediately spring from your mouth on certain occasions, you still should own The Princess Bride. 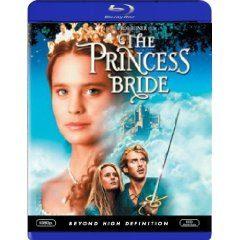 Savvy swordfights, eccentric giants, an evil prince, a dashing hero and a beautiful princess; relive the extraordinary story, The Princess Bride, now as vivid as ones' imagination, debuting on Blu-ray Disc March 17 from MGM Home Entertainment. This staple of 1980's pop culture presents a transcendent and magical experience that elicits uproarious laughter while simultaneously emerging viewers in a majestic world of folklore.

Directed by Rob Reiner (When Harry Met Sally, Stand By Me) and produced by Norman Lear ("All In the Family," "The Jeffersons"), The Princess Bride stars Peter Faulk ("Columbo"), who narrates the extraordinary tale to his grandson, played by Fred Savage ("The Wonder Years"). The Princess Bride features some of Hollywood's favorite stars including Golden Globe nominee* Robin Wright Penn (Breaking And Entering, Forrest Gump) in her feature film debut as the fair maiden Buttercup, Cary Elwes (Georgia Rule, Ella Enchanted) and Golden Globe nominee** Billy Crystal (Analyze This, When Harry Met Sally). The stellar supporting cast includes Mandy Patinkin ("Chicago Hope") as Inigo Montoya, Christopher Guest (This Is Spinal Tap) as Count Tyrone Rugen and the late Andre The Giant as Fezzik.

Loaded with special features, such as audio commentaries and featurettes, the whimsical parody, The Princess Bride Blu-ray Disc also includes a DVD copy of the film and will be available for the suggested retail price of $34.99 / $37.99 Canada. Prebook is February 18.