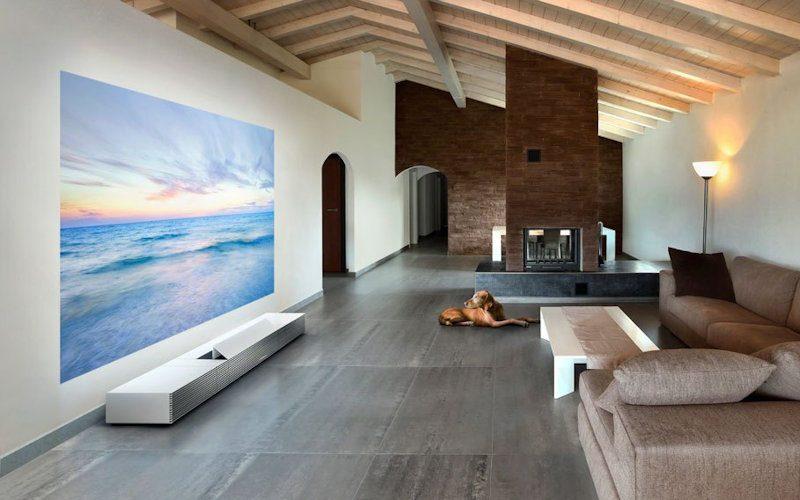 Feature News Stories
Published On: August 20, 2018
We May Earn From Some Purchases Via Affiliate Links

Ultra short throw projectors seem like a no-brainer: all the performance of a projector without the need for a deep room or long cable runs. But along with their advantages, these new projectors to carry with them some potential caveats.

Do you remember those front folding “big screen” TVs from the early 1980s, such as the Kloss NovaBeam? I will never forget my Dad buying such a set circa 1983 from Video Concepts in the Echelon Mall in Voorhees, New Jersey. It was pretty cool acquisition, especially considering we also got an $1,800 VHS machine and a few movies such as South Pacific, Caddyshack, and Airplane, which were super expensive in and of themselves at the time.

It was about as cool a TV system as one could buy back then, and it was perfect for this new concept in the neighborhood called “cable TV,” which my house wouldn’t have until much later thanks to fights over how to actually run said cable to houses. The real gem of this system hid behind the TV in the form of an Intellvision video game console. In its time, it was a pretty trick AV rig, packing every cool source a kid could want.

Front-folding video projectors like the one we had brought big video home in ways that weren’t physically possible then with traditional tube CRT television sets, which at the time were considered “large” at 26 inches of diagonal screen real estate. Front projection packed a lot more screen and wow factor for the day.

Roll the tape forward a generation or so to today, and video manufacturers are getting excited all over again by the concept of short throw projectors. These small box systems basically package a small projector that needs a foot or two of space to shoot back up to what can be a pretty large screen.

You may be asking: why don’t you just buy a traditional front video projector and screen? For many consumers and especially home theater enthusiasts, there is no beating the quality, size, and value of today’s 4K front video projectors beaming onto the right video screen. For others, like younger renters, the idea of running long HDMI cables and AC power, not to mention installing brackets on the ceiling, is a non-starter. That doesn’t mean that these consumers don’t want big, bright video systems in their homes. They do. They need it to get the most from streaming 4K, blockbuster video game titles, UHD Blu-ray, and more. Hence, short throw projectors are becoming more and more of a thing. 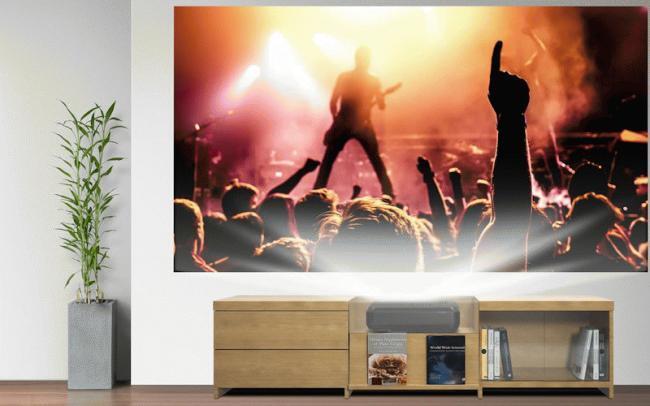 Critics have a lot to say about short throw projectors, though. Installation, if done to video enthusiasts standards, is tough. The projectors need to be placed on a low table but at least 18 to 24 inches in front of the screen. If the screen is drywall (think: sophistication at the level of a frat house setup), then yes, you’ll get an image. But to do it right with a short throw video projector you really want a light rejecting screen specifically designed for the shallow beam these projector’s throw. And that definitely adds to the cost of these setups. An excellent light rejecting 92-inch screen would cost you in the neighborhood of $900. Ouch.

Other potential problems include fan noise aplenty and, of course, the issue that those fans are trying to abate: heat. And what happens when your toddler or terrier or whoever it is who cleans the living room bumps table/rack a quarter of an inch? Your image will be out of whack so badly that you wished that you had bought a top-performing 65-inch flat screen for $1,500.


As for the hardware itself, prices vary. The first solution that I saw years ago was $25,000 from Sony, which was pretty much of a concept product. Today, players like Epson have far less expensive solutions that are more keyed in specifically for home theater use. Epson has a popular laser option for about $3,000. Companies that make business projectors have lesser expensive options, but they aren’t as dialed in for 4K video, and if you are a true home theater enthusiast you want 4K.

Short throw video projectors are an exciting category, and we see new models announced all the time. Granted, they’ll never quite match the wow-factor level of a good long throw projector, nor the value of a good TV if 65 inches of screen real estate is all you need. But if you’re looking to throw a 100-inch image on your wall and you’re in a small (or rented) space, they definitely have their advantages.

If you’ve considered one of these ultra-short throw models, let us know in the comments below: What does your viewing room look like? What’s pushing you in the direction of one of these projectors? What architectural or lifestyle challenges are you trying to work around?