The Right and Wrong Way to Install a TV

The Right and Wrong Way to Install a TV

In 25 years of living in Los Angeles, I have seen it snow only once, and it wasn't even in L.A. I was standing outside of The Mandalay Bay Hotel in Las Vegas during a CES, years and years ago....

In 25 years of living in Los Angeles, I have seen it snow only once, and it wasn’t even in L.A. I was standing outside of The Mandalay Bay Hotel in Las Vegas during a CES, years and years ago. Oh, trust me, growing up in Philadelphia I saw a lifetime’s worth of snow before moving on to the left coast for college. Since then, I’ve spent my vacation dollars visiting tropical locales instead of paying top dollar to freeze my ass off while doing my level best to go Carson Wentz on my ACL on the slopes.

But this year, during my son’s “ski week” (not be confused with the upcoming Spring Break week off of school), my usual vacation druthers were vetoed. My wife is from Lake Arrowhead, California, and also lived in Lake Tahoe when in high school. Her entire family are avid skiers and they were Jonesing to go back to Lake Tahoe to see the old haunts. 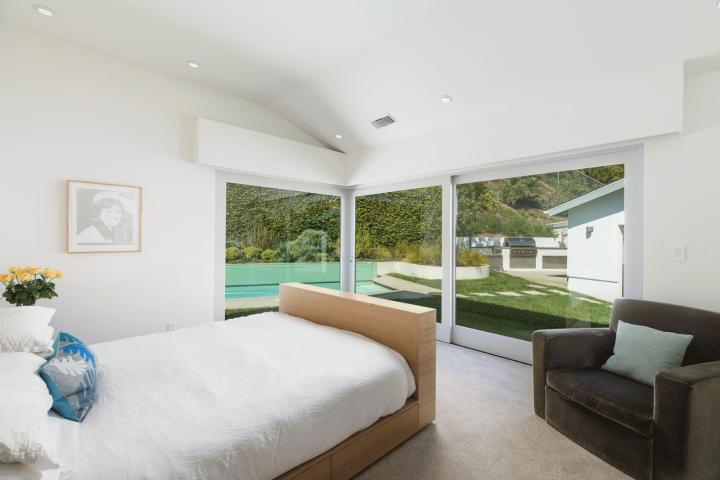 The trip has been a good one so far, as the flight to Reno was uneventful, as was the drive up the mountain to Tahoe. Over nine feet of snow has fallen this week, which is “the most epic” snowfall in the area since 1997, as the locals keep telling us. With the help of Airbnb, we rented a pretty nice condo not too far from the center of town and walking distance to the gondola that leads up to the ski lifts. The place is pretty well equipped, with a large kitchen and many bedrooms–including a nice master suite that my wife and I somehow scored. What got me to hacking away at the old Macbook Pro was the TV situation. The condo is pretty new, as are the Samsung TVs that adorn its walls, but it took a mere 15 minutes of television watching last night after dimmer and before bed to realize that not all TVs are installed with equal aplomb. 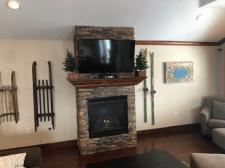 The main TV isn’t a big one, but size isn’t the issue, as the seating distance isn’t really that far from the set. The main issue is that the Samsung set, which looks to be about 50 or 55 inches, is mounted above a fireplace. While this doesn’t have to be a disaster, in this case it is. Someone clearly took the time to run coax and AC power to the installation location, thus poking through the decorative stacked-stone façade on the front of the fireplace. Somebody else made the horrendous design choice to install a mantle a good 12 inches above the remote controlled, gas powered fireplace. The TV is then mounted another six inches plus above that, which means that the top of this diminutive HDTV is nearly touching the ceiling.

With the seating locations in this part of the house as close as five feet, you feel like you have the misfortune of sitting in the first row of the movie theater, but in this case, it’s actually is far worse. Your neck needs to bend in a way that is uncomfortable or even unnatural to effectively view the TV.


Are there reasonable solutions to such an installation problem? You bet there are. At the simplest level, one could find a way to relocate the gigantic cable box from below the TV to lower the set another good six inches, which would be incremental progress. A slightly more expensive solution would be to have mounted the TV on an arm that can articulate down. These mounts are costlier than a traditional fixed mount, but would get you another 12 plus inches of extension downward, while also physically limiting the HDTV from ever getting too close to the very useful fireplace in the condo. The best, but most invasive solution would have been to never install the 12-inch-tall mantle during the construction phase. This one houses the bulky cable box and two decorative fake Christmas trees, so it has little to no value. If you want to hang your Christmas stockings with glee, use some of those 3M sticky hooks that don’t mark up your surfaces when you pull them down after the holidays.

In the meantime, you want your TV centered on the wall a little higher than your head, but not so high on the wall that you need a chiropractor after watching some Oprah. The size of your TV changes the suggested height, but a quick Google search will help you quickly get the right idea for where your set should go based on its width.


Obviously, there are some trickier and much more custom solutions for installing UHD TVs, such as the lift that I used in my glass-walled bedroom. My lift likely cost three times what the 40-inch Samsung TV that it’s attached to did, but the installation is very slick and very easy to use and enjoy. Likely the easier way out any issues like this would be to rethink the layout of the room, specifically divorcing the vertical focal points of the room, which often means the TV and the fireplace. Yes, they can cohabitate, but they shouldn’t directly compete for attention if at all possible.

In this room, that might just not be as easy as I suggested, as the TV would be relegated to more of a corner of the room and closer to window. In this specific case the easiest and best solution is the articulating mount that would allow you to bring the set down a good 12 inches. That would help meet the suggested guideline for a 55-inch TV of 61 inches from floor to the middle of the TV once mounted.

In the end, even the simplest home theaters are about enjoyment of music, movies, TV, games, and whatever other content that you’d like to consume. It is important to plan from square one to make sure an AV system can deliver on those goals, even if your budget is purely entry level. In today’s AV market, even the lowest cost equipment can deliver the entertainment that you love better than most of us expect. But even with that said, we all still need to have the installation well engineered before we start hanging TVs on the wall.

How did you plan hanging your UHD TV? How do you work around troubling room and/or interior design issues with your systems? Share with us below in the comments section.