Many of the big-name TV manufacturers have moved away from their proprietary smart TV platforms and embraced open-source operating systems like Android, Firefox, and webOS. Will this shift lead to a better, faster smart TV experience? 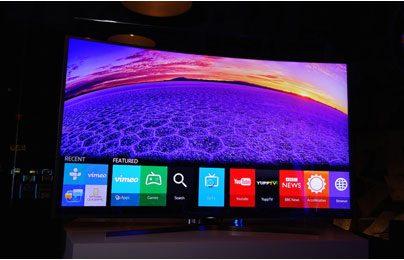 Just about anybody who bought a smart TV a few short years ago will vastly prefer the way that the 2015 smart TV models function when it comes to accessing the Internet, compared with the outdated models they are now stuck with. An exception, of course, might be those consumers who own a smart TV but have yet to even, in CE industry parlance, "activate" it – in other words, they've never used it to access the Internet, including Netflix and the many other apps that are offered on it. Yes, I'm talking to you, the person who bought that high-end, high-definition TV simply because it was the top-of-the-line model offered by its manufacturer and didn't even know or care that it offered all of that Internet-connected functionality. Many of you probably use a Roku or Apple TV set-top box anyhow.

Today's smart TVs are much more user-friendly than their predecessors. Navigating between apps and between live TV viewing and Web-connected functions is much simpler and faster than it was even a couple of years ago. This is true pretty much across the board, regardless of TV brand. An example of that was recently on display in New York, where Samsung touted its new premium SUHD TVs to reporters. Samsung is one of the latest TV makers to shift away from its own self-designed smart TV platform to embrace a more open operating system (OS)--in Samsung's case, it's called Tizen. Also shifting to an open platform for its smart TVs this year is Panasonic, with Mozilla's Firefox OS. LG already shifted to webOS after buying the assets of that OS from Hewlett-Packard in 2014. LG shipped its first TVs featuring webOS last year.

Switching to Firefox was part of Panasonic's desire to take advantage of open platforms for all its connected products, said Panasonic Chief Technology Officer Todd Rytting. "We selected Firefox because we felt that it represented the best opportunity to take our TVs toward an open industry standard, rather than maintain our own proprietary operating system," he said. Firefox is available on many platforms, supports HTML5, and, "most importantly, it is open and fully supported by an active user community," he said.

Tizen, meanwhile, provides a "more responsive" and "more fluid" experience for users than the Samsung OS used in the company's prior smart TVs, said Jesse Rowe, national trainer for Samsung Electronics. It also has enabled better connectivity with other Samsung devices, including the company's smartphones and watches.

It's a similar story for LG with the shift from its NetCast smart TV platform to webOS. "There were a lot of great things" about NetCast, which gave LG its start in the smart TV category when introduced in 2009, said Matt Durgin, director of smart TV content at LG Electronics USA. Among other things, LG's NetCast TV models were the first smart TVs to feature Netflix streaming. But webOS has allowed LG to enter a "new era of true open" Web technologies, including HTML5, that has enabled app developers and LG's content partners to streamline their development across platforms, said Durgin. Key features that are now possible on LG's smart TVs include multitasking and app switching, along with the ability for TV users to customize their experience. Whereas NetCast was built on older technologies like Adobe Flash, HTML5 (which wasn't available when the first NetCast TVs were introduced) has become the most common method of developing applications and Web pages for the Internet, Durgin explained. The older technologies were good for their time, but they had a "shorter shelf life, so we couldn't move with those forever," he said. Also, it was tough to customize with NetCast because that OS was made up of a lot of resident code that wasn't movable, said Durgin. WebOS, on the other hand, allows consumers to move icons and change the screen as they like to use applications and to focus on the applications they use the most.

LG has already seen a bump in activation on its smart TVs since implementing webOS on its sets last year, said Durgin. The activation rate is now well over 80 percent, up from 66 to 70 percent on the NetCast models.

One can't overstate how significant the need for ease of use was in convincing TV makers to shift to more open and simplified smart TV platforms. "Competition in smart TV has shifted from populating as many apps as possible to improving ease of use," said Paul Gray, principal analyst and researcher at IHS Technology. The number of apps became so huge that navigation became slow and difficult on smart TVs, he explained. Most TV users tend to use only a handful of apps anyway, including Netflix and Hulu Plus, of course. Several TV makers, including Sony, have opted to shift from their own proprietary smart TV operating systems to Android TV, Google's smart TV platform. Android, after all, is the most prevalent and recognizable platform used by CE devices now, said Taka Fujita, vice president of home entertainment and sound at Sony. By using Android for the first time in its smart TVs in 2015, Sony is able to offer customers the ability to have the same user experience on their TVs as they have on their other Android devices, including smartphones. Those TV users can now easily integrate their smartphone or tablet into their TV viewing, Fujita added.

"Smaller" smart TV brands (relatively speaking) are trying to contain software development costs by moving to these shared or open platforms that enable them to stay competitive with platforms that are well-supported by developers, said Gray, referring to TV makers like Philips, Sharp, and Sony. This shift could make it more cost effective to keep up with Samsung and LG, which combined for a 42 percent global market share on connected TV shipments last year (if you exclude China, those two set makers had a combined 62 percent share). The closest competitor had less than half of LG's share, Gray said.

While the smart TV experience has certainly improved, the set makers still face several challenges. One major challenge is the TV viewer's shift to mobile devices. "Heavy interaction with a screen you cannot touch is hard," said Gray, adding that the largest step going forward is in "co-opting smartphones and tablets to do the heavy lifting in interactivity" for the TVs. The integration between the mobile device and TV has to be seamless and enhance, instead of detract from, the overall experience. Using a smartphone for, let's say, volume control is not a perfect solution because, among other things, it takes time for users to enter their screen-lock passwords into their phones. When viewers want to lower or increase the volume, they tend to want to do it immediately. They don't want to search for their smartphone when the volume is pumped way too high on their TV.

Another major challenge is the competition that comes from streaming set-top boxes like Apple TV and Roku, which many users have embraced precisely because they are faster and more intuitive--issues that these new open platforms are trying to rectify in the smart TVs.

The biggest issue going forward will be the cost of supporting and developing the smart TV platforms, said Gray. "Android will definitely have ready finance, but I am not convinced that individual TV brands have robust revenue streams from their platforms to support their ongoing development." Those TV makers will then "face a dilemma: fall behind or dent profitability trying to stay current," he said. The challenging thing about a platform is that it's like a tax, in that there is a high fixed cost just for a TV maker to stay in the game with its own platform. The primary challenge for smart TV makers will likely be keeping their platforms current while fending off all the fast-evolving competition from numerous directions without breaking their banks on research and development.

Despite these challenges, it seems likely that LG and Samsung's smart TVs will continue to flourish globally, thanks to their dominant market share positions and the significant enhancements that they have made to their sets. It also seems likely that Samsung and Vizio, the market share leaders in North America for the past two years, will continue to see their smart TVs perform well in the U.S. for the time being. Enhancements that Vizio has recently made to its Internet Apps Plus smart TV platform should only help.

I suspect that the top smart TVs will also co-exist comfortably with Roku and other standalone set-top boxes for the foreseeable future. Many TV owners prefer to have the best TV they can afford in their living room, and the best TV that they can afford is often a model with connected features...whether they plan to use those features or not. It will certainly be interesting to see if all these new smart TV platforms, with their new operating systems, will lure more people away from the set-top boxes and embrace the integrated solution.

Are you using your TV's built-in smart TV platform, or do you prefer a standalone media player? What features do you value most in a smart TV platform? Let us know in the Comments section below.

You'll automatically be entered in the HTR Sweepstakes, and get the hottest audio deals directly in your inbox.
Author
Jeff Berman
When you buy through links on our site, we may earn an affiliate commission. Your support is greatly appreciated!