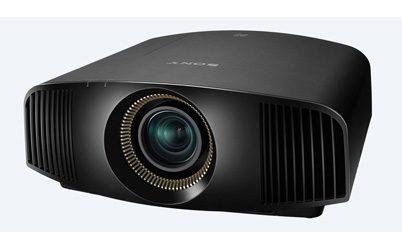 Are you looking to assemble a big-screen 4K video system? Adrienne Maxwell discusses the state of 4K in the front-projection home theater market.

Suffice to say, the era of 4K/Ultra HD has fully arrived in the television market. All of the big-name and even some of the not-so-big-name TV manufacturers now offer UHD TVs at a variety of price points and screen sizes–from 40 inches up to 150 inches. Of course, when you move up to true theater-friendly screen sizes over 100 inches, the price of a flat panel increases exorbitantly. Samsung’s 105-inch 105S9, for instance, will run you a cool $120,000–which leads fans of truly big-screen home theater to ask one simple question: Where are all the 4K projectors?

In the 1080p market, front projection absolutely represents the best value at screen sizes over 100 inches, even when you factor in the cost of a screen. These days, you can get more than respectable performance from 1080p projectors that cost less than $1,000, and there are a ton of options, particularly in the DLP and LCD categories.

Unfortunately, when you move up to 4K, the number of projector options decreases as quickly as the price increases. You’ll also run into confusion as you try to discern the difference between true 4K projectors and “4K-friendly” projectors that accept 4K input signals but don’t have a native 4K resolution. The confusion will only increase later this year as we see the arrival of DLP projectors that kinda sorta fall in between native 4K and 1080p.

If you’re a front-projection fan who’s thinking about making the jump to 4K sources, here’s a rundown of what’s available now and what’s coming soon in the projector marketplace.

Native 4K
In the TV realm, a 4K or Ultra HD resolution means 3,840 by 2,160, which is the logical choice in that it’s the perfect doubling of a 1920-by-1080 HD resolution in the horizontal and vertical planes. In the projection realm, native 4K projectors have a slightly higher resolution of 4,096 by 2,160, matching the theatrical DCI standard.

There are very few native 4K front-projection options in the home theater category. If money is no object and you’re assembling a six- or seven-figure, ultra-large-screen home theater, perhaps you can afford to explore professional-grade cinema projectors from the likes of Christie and Barco that have a native 4K resolution.

In the real world where most of us live, though, there’s really only one manufacturer offering native 4K front projectors for the home: Sony. The company’s current lineup features a total of five native 4K projectors. Below we’ve highlighted the three newest models. There’s also a short-throw model (the VPL-GTZ1). The older VPL-VW1100ES (which lacks HDR support) will remain in the lineup, but the older 600ES and 350ES models have been discontinued.

Pixel-Shifting 1080p Projectors
Manufacturers like JVC and Epson have yet to enter the native 4K market. Instead, these manufacturers offer “4K enhanced” 1080p projectors that accept 4K input signals and use pixel-shifting technology to simulate a 4K signal. JVC calls its pixel-shifting technology “e-shift” and describes it like this: e-shift creates sub-frames and shifts them by a half pixel diagonally “to achieve four times the pixel density of the original content.” Epson’s 4K Enhancement technology works in a similar way. Although the resolution is not native 4K, the projectors listed below do have HDCP 2.2 copy protection, and many support features like High Dynamic Range and DCI-P3 color.

I recently reviewed JVC’s DLA-X750R e-shift4 D-ILA projector ($7,000) and compared it directly with Sony’s now-outdated VPL-VW350ES native 4K model. On a 100-inch screen, I really could not discern a difference in detail between the two models with real-world UHD content, and I actually preferred the JVC’s picture quality because it had slightly better contrast and black level. If you move up to a 150- or 200-inch-diagonal screen, perhaps the benefits of native 4K would be more obvious. However, if you want to save several thousand dollars and have a modest-sized screen, then pixel-shifting solutions are a valid option. I know some people just don’t accept this answer. They have it in their minds that native 4K is the only acceptable solution, and really that’s fine. Just be prepared to spend the extra money for the peace of mind that you’re getting a true 4K signal.

At the recent CE Week show in New York City, Epson announced several new 4K-friendly LCD projectors at much lower price points. These models omit the laser light source and the Reflective LCD technology found in the LS10000 (Reflective LCD is more like LCoS than traditional transmissive LCD), but they include the 4K Enhancement pixel-shifting technology and, most notably, they add HDR support. [Editor’s note, 8/18/16: The original version of this story incorrectly stated that the new projectors use Reflective LCD technology, just like the LS10000.] The new models are:

I asked both JVC and Epson to comment on when we might expect to see native 4K options. A JVC rep answered that “JVC isn’t ready at this time to make any comments about native 4k projectors.” Epson’s senior product manager of projectors, Rodrigo Catalan, gave a longer answer, but the meaning was the same: “We leverage our expertise to carefully evaluate markets before entering them. Epson’s latest 4K Enhancement technology brings 4K performance to today’s consumers at a groundbreaking price point, offering a level of performance that challenges today’s native 4K projector offerings. We are committed to bringing industry-leading solutions to the market that continue to break performance barriers–from 4K and beyond. The timeline for deploying a native 4K projector is contingent on how market demand for native 4K changes with the introduction and availability of Epson’s new state-of-the-art 4KE solutions.”

Texas Instruments’ New UHD DLP Chip
Back at CES, Texas Instruments officially unveiled its 0.67-inch 4K UHD chip, designed for use in smaller, more affordably priced single-chip home theater and business/education DLP projectors. Technically, this DLP chip uses four million mirrors, which translates to four million pixels. Native 4K has roughly eight million pixels, while 1080p has roughly two million pixels, so the DLP design falls in between. However, the chip’s fast switching speed (over 9,000 times per second) allows each mirror to render two “distinct and unique” pixels per frame, so it can theoretically display every pixel in a 4K source. At least that’s how it has been explained thus far. You can get more details on Texas Instruments’ website.

Back at the 2015 CEDIA Expo, I got a sneak peek at a DLP projector prototype using this new chip, pitted against an “unnamed” native 4K projector and an unnamed pixel-shifting model. I looked at 4K resolution patterns, 4K still images, and 4K video, and the DLP prototype’s ability to resolve the finest details was quite impressive. Of course, it was a prototype. How the technology plays out in real-world models remains to be seen.

Have you made the jump to 4K front projection? If so, which model did you buy? How important is a native 4K resolution to you? Let us know in the Comments section below.