My first encounter with THIEL speakers was with the excellent CS3.7 floorstanding speaker, which was the late Jim Thiel's last flagship design at the end of his life. I was impressed by how it managed to deliver extremely high-end performance... 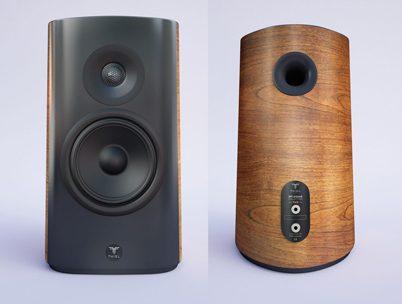 My first encounter with THIEL speakers was with the excellent CS3.7 floorstanding speaker, which was the late Jim Thiel's last flagship design at the end of his life. I was impressed by how it managed to deliver extremely high-end performance at a pretty solid value. With Mr. Thiel's passing, the audio community wondered what would become of this great brand's legacy. Many of our readers, I'm sure, are now familiar with THIEL's latest comeback--the new 3rd Avenue line of speakers--after reading Brent Butterworth's review of the TT1 floorstanding speakers.

For review here today is the TM3 bookshelf speaker, which belongs to the same 3rd Avenue line and shares much of the design characteristics of its bigger brother, the TT1. At 17.1 inches tall, 9.8 inches wide, and 10.9 inches deep, the TM3 weighs in at 20 pounds. Standard to the line are four beautiful finishes: high gloss black, white, and two different wood patterns. The driver complement is similar to the TT1 but reduced in configuration: whereas the TT1 is a three-way design, the TM3 is a two-way design that uses the same one-inch titanium dome tweeter and employs a similar glass fiber-cone technology in a 6.5-inch woofer that pulls double-duty as the midrange and bass driver. The TM3 retails for $3,000 per pair, with matching stands available for an additional $600.

The Hookup
My usual Oppo BDP-105 served as the conduit for all sources, disc or streaming. The TM3's speaker sensitivity is rated at 87 dB, which tells me that it runs a little on the inefficient side--that doesn't mean it's a bad speaker, it just means that the TM3 needs to be paired with amplification that has enough power to drive it right. The nominal four-ohm impedance rating (with minimum impedance of 3.6 ohms) tells me that, beyond just needing more power, it needs high-quality amplification--an amp that is stable down to at least four ohms. Recommended power is between 20 to 150 watts, but the manual suggests that on average you should pair these speakers with at least 100 watts.

Wanting to test this out, I alternated my listening tests between running the Oppo directly through an Onkyo TX-NR515 receiver and going through higher-quality separates with my reference Parasound JC2-BP two-channel preamp powered by a Crown I-Tech HD 5000 amplifier. A full complement of Wireworld Silver Eclipse 7 interconnects and Solstice 7 speaker cables provided all the necessary connections.

The TM3 speakers were a breeze to unbox and fit nicely into the matching stands. Banana-plug connections from my speaker cables fit snuggly in back, where the inputs are well spaced and easy to access.

Performance
Starting off with some music, I played Daft Punk's Random Access Memories (CD, Sony/Columbia). With the Onkyo receiver in the mix, I immediately got the sense that things weren't quite right. Bass was flabby and loose. Vocals seemed nondescript. This was simply a matter of the speakers needing more power. It's an all-too-familiar feeling for me, as my own reference Salk speakers have similar impedance and sensitivity characteristics and similarly need lots of high-quality amplification. So I plugged the TM3s into the Parasound/Crown combo, and that made all the difference. With techno music, the beat is very important, and it's often defined and characterized by the bass. The TM3's bass was tight and controlled, just the way it should sound. Even playing without a subwoofer, I felt the TM3 was able to dig low enough to portray the overall feel of the beat. With the Crown driving the speakers, I had no issues filling the room with sound--even at volumes that risked death by neighbor, the TM3s showed no signs of letting up.

The overall timbre was very neutral, almost overly so. For instance, on the track "Lose Yourself to Dance," during the introduction that features a mostly artificially created combo of sounds ranging from blowing air and "sprinkles" of high-pitched chimes, the TM3s' delivery lacked the excitement and immediacy of a speaker like B&W's CM6 S2. It wasn't that the TM3's presentation was wrong; it was just very matter-of-fact.

In vocal passages, I heard absolute accuracy. The soundstage further impressed me, with a very deep, wide, almost holographic picture of Pharell Williams voice in "Get Lucky." However, while the size of the soundstage certainly was impressive, I did notice that the sweet spot was very small. As I moved from the center spot on my couch even just a few inches, I heard significant differences from that optimum sweet spot.

Realizing that techno music is probably not the THIEL speakers' specialty, I moved on to some more natural acoustic selections. I queued up the early Celine Dion hit album S'il suffisait d'aimer (CD, 550/Epic). On the title track, the quality of the piano sections was superb, shining through with rich, deep tones that gave the piano a very natural, realistic presentation like few speakers of this size and price point can do. Dion's voice came through with fine clarity and resolution, but it seemed to sparkle a little less than I've heard through other speakers. Here again, the overall sound was very neutral, almost without a particular character or bent. With classical, jazz, or any music with real instruments, especially in live recordings, this was a strength, creating an almost unparalleled sense of realism. However, with more produced music like rock or techno, the presentation seemed to miss that extra little bit of excitement or pizzazz that sometimes helps me to engage more with the music.

Moving on to some full-bodied TV sound, I streamed the premiere episode of Blindspot (NBC). This action-packed thriller/drama has a wide range of material that's great for testing out speakers. The TM3s proved to be quite adept at managing dialogue. In one of the initial scenes where Sullivan Stapleton's FBI agent Kurt Weller interrogates Jaimie Alexander's Jane Doe, every nuance of Stapleton's deep, gritty tone and all the subtleties of Alexander's nasally, slightly hoarse voice were reproduced masterfully. Equally impressive was how all the dynamics from yelling/screaming to sudden whisper-like quiet passages flowed with just the right timing, never being too discrete or too mixed in. At times I felt like the actors were in the same room as I was.

In some scenes, usually when the action was heaviest and more sound effects were in use, the TM3s didn't quite paint as life-like a picture. For instance, I tested an apartment fight scene where Jane Doe squares off against an abusive husband to defend his wife using both the THIELs and my reference B&W CM6 S2s. With the B&Ws, the many thuds, crashes, crackles, and pops seemed to dazzle a little more, telling a story about the action, while the THIELs seemed more to be stating a fact that the action happened and describing the sound exactly as it was recorded.

Next, I slipped the Christopher Nolan hit Interstellar (Paramount/Warner, Blu-ray) into the Oppo. Throughout the film, the Thiels presented Hans Zimmer's score with a beautiful picture. It exemplified the Thiel's style--what it is and what it's not. Every sound and note were masterfully detailed and measured out. The dynamics were timed and executed with stunning accuracy. The organ music and other naturally voiced instruments were so natural sounding, it was like being in a live performance. Yet, the TM3s did not sound artificial, even with artificial-sounding effects. The synthesizer portions lacked that bit of edginess that I got playing when those scenes with other speakers. The kind of edginess that allows you to feel the tension Matthew McConaughey's Cooper is experiencing being in space and racing against time to save the world. In one of the final scenes [potential spoiler alert], Cooper is trapped by unknown powerful beings in a Rubik's cube-like maze where he watches helplessly as he is shown various scenes from his past. The presentation I got was more akin to listening to a live performance of an orchestral accompaniment instead of an artificial score. The Downside
As I've already explained, the TM3s are a little more demanding in terms of the kind of amplification needed. The Onkyo TX-NR515 receiver is rated at 80 watts per channel with two channels firing using FTC standards, and it simply wouldn't do. I'm not saying you need something that puts out 2,500 watts per channel like the Crowns I used, but you do need sufficient power that is stable into lower impedance loads. This may translate into a slightly higher cost. So, if you are thinking about bookshelf speakers instead of floorstanding speakers because of cost savings, you should take the amplification into consideration here.

While I thought the quality of the TM3's midrange was just sublime, its top end, by comparison, seemed a bit pedestrian. The highs didn't sparkle like you might find with a Focal Beryllium tweeter or B&W's decoupled diamond tweeter. The THIELs have a very neutral, matter-of-fact presentation across the frequency range. Those who are interested in speakers mainly for music, especially acoustic and live music, will probably be happy--ecstatic even--to have speakers that do not color the sound in any way, but the TM3's neutrality could also be a detriment to some listeners. At the end of the day, it's a matter of preference, rather than an absolute right or wrong.

Finally, there were both pluses and minuses on how the TM3 seemed to position within a room. Imaging was superb, and the soundstage was both deep and wide in my room. However, the TM3 had a smaller sweet spot than other speakers I've heard.

Comparison and Competition
As many speaker manufacturers have sought to trickle down some of their best technologies from their flagship lines, this means that there is quite a lot of competition for the THEIL TM3 speakers at lower prices. At $1,000 less per pair than the THIELs, the B&W CM6 S2, which serves as my own reference bookshelf speakers, featuring its tweeter-on-top design, delivers a top end that has better resolution, openness, and overall life-like presentation than the TM3. It's also easier to pair with amplification. However, the THIEL's ultra-neutral sound and rich, smooth midrange may be more appealing to some.

Paradigm's new 15B from its Prestige line has a smaller midrange/woofer and will probably not be able to fill quite as large of a room as the THIELs, but it features technology that helps it deliver a wider sweet spot. At $1,600 per pair, it will give the THIELs quite a run for their money.

Finally, at $2,000 per pair, the Revel M106 bookshelf speakers from the high-value Performa 3 line reviewed here should go toe to toe with the THIELs in terms of neutrality, but may offer a more resolute and open top end.

Conclusion
The THIEL TM3 bookshelf speakers may not be for all tastes, but they very well may be for yours...if you desire a neutral speaker that it doesn't impart any particular character of its own. These speakers serve up exactly the music that went in--nothing more and nothing less--assuming you have the high-quality amplification to drive them. The THIEL TM3 speakers offer a level of accuracy, refinement, and build quality that is second to none in their price range. Wherever your tastes lie, I would still invite you to audition the THIEL TM3s. It will be an enjoyable musical experience that you won't soon forget.