When it comes to home theater, I guess I walk the walk and talk the talk, because it's been about 15 years since I set foot inside a commercial movie theater. I watch movies at home. I watch movies in... 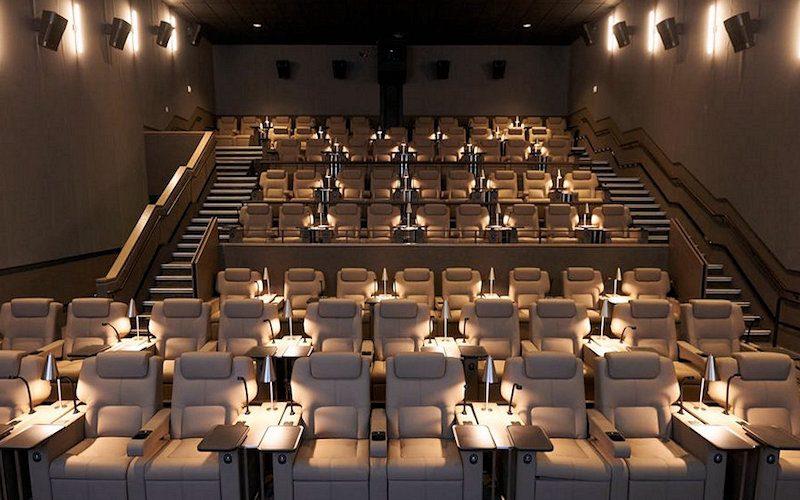 When it comes to home theater, I guess I walk the walk and talk the talk, because it's been about 15 years since I set foot inside a commercial movie theater. I watch movies at home. I watch movies in other people's screening rooms. I long ago decided to skip the sticky floors, narrow seats, and greasy popcorn for the comfort of my own living room dialed in with all of the AV goodies that we opine about here on the pages of HomeTheaterReview.com.

But all of that changed this past weekend, as I was exiled from my house for yet another open house at Casa Del Colliano on a miserably rainy day in Southern California. My wife and I made a few phone calls to see if our nearly seven-year-old son's buddies were free, and we decided to spend most of our three hours of away time watching the sequel to The Lego Movie at the new boutique theater in our neighborhood.

We live in a somewhat odd neighborhood in Los Angeles, in that our little enclave is very old school and anti-change, in stark contrast with the overall, progressive, new-school vibe on the west side of town. A billionaire developer just completed a $900,000,000 redevelopment of our village, which is a pretty slick project.

Beyond bringing back the long-lost ice cream shop from Santa Barbara, digging a hole half way to the center of the Earth for parking, and offering seemingly endless places for women to spend $1,000 or more on a dress, the redeveloped village also brings back the legendary Bay Theater.

This movie theater might have the signage of the theater that once thrived here, but inside it is a whole other world. For someone who gave up on the communal movie-watching experience a long time ago, it was pretty eye-opening to see just how luxurious it all was. For $27 per ticket, it had better be, right?

To start, the fixtures in the lobby were first rate. Stone, expensive carpet, tastefully designed lighting... Often tacky movie posters and other promotional materials are replaced by silent, paper-thin flat screens. There were people who greeted you and escorted you to the desk in front of one of the five theaters that have been built on property. When we got to Theater One, the usher took our tickets and then had someone escort us along with three amped-up first graders into the stadium seat theater. First impressions were in the "whoa" category. The screen looked to be an odd aspect ratio and it was huge, considering our seats were about halfway back from the screen but not on the elevated part of the stadium seating. The seats were next-level fantastic. They were made of very nice leather and were motorized recliners. There was a nice little desk attachment for your food and/or beverage, as well as a little light so that you could read the menu in the theater without messing up anyone else's movie experience. What this theater understood was that even at this extreme level of ticket pricing, they were going to make their money selling food and drink. One look at the menu and they weren't messing around. They had very gourmet offerings, healthy options, a full bar, and more to go along with the standard candy, popcorn, and other more traditional movie theater fare. Unlike the ticket prices, the food prices were more reasonable. The number of waiters and runners was something that I've never seen before in a movie theater. We were quickly and pleasantly greeted. Popcorn to share and a Diet Coke for me were delivered during the semi-lit previews, which seemed a little less formal than what I remember from the movie theater experience of the past. Once again, these guys are in the business of selling food and drink more than another $27 ticket for a future movie, which is likely a smart business model.

For starters, the kids loved the movie, which I thought was suitable but not quite as good or as original as the first Lego Movie. But despite the luxury and comfort of this theater, the image on the screen was just OK--not spectacular. My main video complaint was that sitting in the middle of the theater, I shouldn't have to move my head to watch the image. Simply put, the image was just too big for the room. I get it: bigger is better in many parts of the world, but here the image was just too big for many of the plush seats in the theater.

In terms of the audio presentation, the volume was set at a good level--loud but not ear-splitting. The voices from through the screen sounded acceptable but not like what you might expect from an audiophile grade theater at home. The biggest disappointment was the surround sound, which just didn't blow me away despite the copious amount of speakers flanking the side walls and back wall of the theater.

Overall, going to the movies on a nasty, rainy day in Southern California was a pretty good idea. We all had a good time and the experience is so far upgraded from what I wrote off more than a decade ago. Can you create a better overall theater experience with today's home theater equipment? You sure can, and I am not talking about a $250,000 home theater.

And that value proposition got me thinking about the holy grail concept of "day-and-date" movie releases. Hollywood is scared to death of this concept, because the minute they start selling movies direct in 4K right into the home on day one, they think that they will kill off their longstanding relationship with traditional movie theaters. Perhaps they are right, but the reality is that Netflix and Amazon Studio are already creating content in 4K and delivering it via a mainstream delivery system (like an $85 Roku Ultra) right now.

Moreover, as Andrew Robinson points out: today's Hollywood theatrical movies are released to home video, pay-per-view, and other venues as soon as 45 days after they first hit the commercial movie theaters. What movie has come out in the last 10 years that you couldn't wait a month and a half to see in the comfort of your own home and with the technical excellence of even a modest yet modern home theater? I can't think of one.

Sources who need to remain nameless have told me about the potential roads that we, the home theater loving consumers, might get day and date movies. Prima tried to deliver this to the billionaire class with a now boat-anchor $30,000 server and $500-per-movie costs. That went over like a turd in the punch bowl, mostly due to very limited studio support. The future of day-and-date movies will not require such a heavy investment in hardware, but it might require something more than a Roku in the early stages, at least when it comes to content from the traditional studios.

What I am being told from a number of sources is that the proposed price to watch a first run, day-and-date movie at home in 4K, with all of the killer surround sound (the whole movie theater package for the home) is going to be spendy. I mean the kind of spendy that makes $27 per ticket look cheap. I am hearing $750, $1,000, $1,250 or more--perhaps on a sliding scale based on just how new the movie is. I estimate that I spent about $250 all-in going to the movies on that rainy Sunday for five people. That includes the tickets, $20 on popcorn and drinks, lunch, and goodies from that bad-ass ice cream shop from Santa Barbara. Valet parking was $14 and was kinda over-the-top, but it was raining.

The forces lobbying to bring us day-and-date movies at home are thinking that we will spend double, triple, quadruple, or more than that on a first run movie at home. I fear I am not going to be that guy. My gut instinct says that $100 for a first run movie at home in 4K with all of the goodies feels about right. You could rack up one hell of a bill $100 at a time watching movies if you weren't careful. I complain that Ultra HD Blu-rays are expensive at $25 to $35 each, but they provide the same movie experience as any day-and-date release will--just a little later and for a tiny fraction of the price.

The other potential thing keeping day-and-date from being as big a deal as it may have seemed a few years ago is the fact that other players--players you may not think of as movie studies, like Amazon Studios and Netflix--are chipping away at our notion of what it means to be a major motion picture release. Apple is getting in the content business. You think Google isn't going to take a shot at making featured content? They might with a delivery system like You Tube. And they aren't going to sell you first run movies for $500-plus. They are going to compete right with the theaters and home video.

Where do you stand on going to the movies? What gets you out of your home and into a theater? How excited are you for day-and-date movies in your home? How much will you pay for a Hollywood blockbuster if you could watch it on your 65-inch 4K OLED (packing HDR, Atmos, etc.) with a big pour of Macallan 18 and all of the comforts of home?