Cute, portable, water resistant, and it sounds way better than you would expect, the Tivoli Audio PAL makes a fine addition to any kitchen, den, bathroom, or workout room. The PAL plays stereo through its headphone output and will take iPods via an auxiliary 3-d party dock. 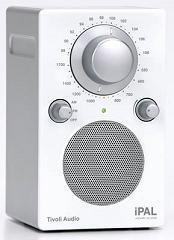 Damn, is this thing cute!!!! Tivoli Audio has followed the magnificent Kloss Model One table top radio with its portable equivalent, the PAL, and it's, it's - I don't know - effin' PERFECT!!!! Forgive my exuberance, but I go all warm and fuzzy when Sam, our 12-year-old, grudgingly issues even a sotto voce 'Cool' upon espying whatever I'm reviewing that day. He took one look at the PAL, gave it the current street-cred blessing, and then went back to his GameBoy.

Imagine the Model One upended, wooden sleeve removed and size reduced fractionally to 3.75x4.5x6.1in (WDH) including the knobs. The layout, turned 90 degrees, is identical to the Model One's, with one omission: to save battery life, there is no tuning light, only a green LED to indicate on/off and the state of the battery. It blinks when the battery is running down or being charged. At the back is a telescoping aerial, and - for moisture resistance - covered sockets for auxiliary, headphones and mains adaptor inputs. Although this is mono through the speaker, plug in headphones and you're listening to damned fine stereo playback!

Moisture resistance carries over to the finish, a rubbery coating reminiscent of the 'dead skin' coverings now used on cameras. To facilitate handling, there are indents on the sides. The only downer is that, in dark colours, the PAL shows finger grease, but it is washable with a damp cloth. The review sample arrived in fetching shade of ca-ca brown. Don't worry: there are seven other less nauseating colours.

Straight out of the box, the PAL proved itself to be just what it
promised: a Tivoli Model One minus dependence on the mains. It's even
magnetically shielded. The PAL met its specification of running for
nearly 20 hours unplugged, with playback level set at just below
half-volume. Crank it up, and it may drop to 6-10 hours. Tuning worked
beautifully as per the domestic version.

Aaah, the sound! Since the PAL has a marginally smaller driver and
lacks the augmentation of port, the bass is less rich and the sound a
shade more forward. I compared PAL with Model One, using plain voice via
Radio 2 and orchestral from Classic FM. The marginal loss of low-end
extension is truly negligible. Let's put it this way: if you love the
Model One, you'll love the PAL. If you don't need portability, though,
stick with the Model One (or stereo Model Two), as the PAL sells for
130. Oh, and for those who want to know: yes, the PAL sounds sweeter
running off battery rather than off the supplied 12v wall wart!