While the Toshiba 65HT2U LCD HDTV doesn't offer a lot of excess when it comes to features, it does offer up plenty of screen real estate. But will the performance measure up to that screen size? 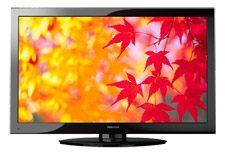 Toshiba recently introduced a value-oriented 65-inch LCD TV, priced at just $1,699.99 (with a street price closer to $1,500). We have not performed a hands-on review of the 65HT2U, but here is an overview of its features. This 1080p LCD uses a traditional CCFL backlight, as opposed to LED lighting, and it includes Toshiba's ClearFrame 120Hz technology to reduce motion blur and film judder. The 65HT2U is not 3D-capable, nor does it offer access to Toshiba's NET TV Web platform.

Additional Resources
• Read more LCD HDTV reviews from the staff at Home Theater Review.
• Compare this to the 65-inch Samsung.
• Find a Blu-ray player in our Blu-ray Player Review section.

The connection panel includes three HDMI inputs (one is side-facing for easier access), plus one component video input, one PC input, and one RF input to access the internal ATSC and Clear-QAM tuners. The side panel also includes a USB port that supports JPEG and MP3 playback. The TV lacks network connectivity, and it does not include an RS-232 or IR port for integration into an advanced control system.

The 65HT2U is, not surprisingly, a tad lean in its picture adjustments, but it does include a few options we don't expect to see in the budget category. You get five picture modes, as well basic adjustments for contrast, brightness, color, tint, sharpness, backlight, and DynaLight (a dynamic black control). Advanced options include three color-temperature presets, plus Blue and Green Drive adjustments that provide some ability to fine-tune the TV's white balance; an 11-step Static Gamma adjustment; dynamic contrast; noise reduction; and a game mode to reduce lag. The ClearFrame 120Hz technology includes two parts: ClearFrame (on/off) specifically addresses motion blur by increasing the number of frames, while Film Stabilization (off/standard/smooth) adds varying degrees of frame interpolation to reduce judder and produce smoother motion with film sources. The TV has eight aspect-ratio options, including a Native mode and a Dot by Dot mode.

The audio setup menu lacks preset sound modes but includes bass, treble, and balance controls, as well as dynamic range control. This model omits the advanced Audyssey audio options you'll find in other new Toshiba models. As for its aesthetic, the 65HT2U has a fairly straightforward glossy-black design with a rounded, swiveling stand. Without the stand attached, it has a depth of 4.09 inches and a weight of 91.25 pounds.

Read about the high points and low points of the Toshiba 65HT2U on Page 2.

High Points
• This TV has a 65-inch screen and a 1080p resolution.
• ClearFrame 120Hz technology can reduce motion blur, while the separate Film Stabilization mode addresses film judder.
• Some advanced picture adjustments are offered, such as blue/green drive, static gamma, noise reduction, and a game mode.
• LCDs can be very bright, which makes them a good choice for a brightly lit viewing environment.
• The 65HT2U has three HDMI inputs, plus a PC input and a USB port for MP3/JPEG playback.
• This TV includes Toshiba's handy Channel Browser to easily navigate tuned channels and connected sources.

Low Points
•
This TV uses a traditional CCFL backlight, so it's not as thin and
light as an edge-lit LED-based LCD. Also, its black level will likely
not be as deep as you'll find in the better LED-based LCDs with local
dimming.
• LCD viewing angles are not as good as you'll find with a plasma TV.
• The 65HT2U lacks 3D capability.
• This TV does not offer a network connection or access to Toshiba's Web platform.
• You won't get as many advanced picture adjustments as Toshiba offers on its higher-end TVs.

Competition and Comparison
Compare
the Toshiba to its competition by reading reviews of the Sharp
LC-70LE732U, Westinghouse VR-6025Z, and Sanyo DP55441.

Conclusion
Perhaps Toshiba has noticed Sharp's recent
success in the 60-inch-plus category and decided to see if it can do the
same with a budget 65-incher of its own. The 65HT2U is no-frills in the
features department, but it does offer a 1080p resolution, 120Hz
technology (important for an LCD at this screen size) with a de-judder
option, three HDMI inputs, and a USB media port. The lack of LED
backlighting and local dimming means it probably won't deliver the kind
of black-level performance that we desire for a theater-quality image,
and it's obviously not the right choice for anyone interested in 3D
capability. As for the lack of a Web platform, you can easily add a
standalone streaming media player with the money you save. If you really
want a large-screen all-purpose TV but have a limited budget, then
you'll definitely want to give the 65HT2U a look.

Additional Resources
• Read more LCD HDTV reviews from the staff at Home Theater Review.
• Compare this to the 65-inch Samsung.
• Find a Blu-ray player in our Blu-ray Player Review section.