Toshiba has offered a very value oriented player in the company's BDX2150 Blu-ray player. Yet, the player does support a pretty impressive amount of features given its very small price tag. 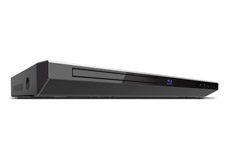 Toshiba recently added two new sub-$100 Blu-ray players to its line, the BDX2150 ($79.99) and BDX-2250 ($99.99). The primary difference between them is that the higher-priced model includes integrated WiFi. We have not performed a hands-on review of the BDX2150, but here is a more comprehensive look at its features. The BDX2150 is not a 3D-capable player, but it does include access to several Web-based services: Netflix, CinemaNow, Blockbuster On Demand, VUDU, YouTube, and Pandora. The player also supports media streaming from a network-connected server.

The BDX2150 supports playback of BD, DVD, CD audio, AVCHD, WMA, MP3, and JPEG files. The connection panel includes four ports: HDMI, coaxial digital audio, Ethernet, and USB. There are no analog outputs on the video or audio end. The player has onboard Dolby TrueHD and DTS-HD decoding, and it can pass both of these high-resolution audio formats in their native bitstream form over HDMI, for your A/V receiver to decode. You can add the player to your home network either by using the back-panel Ethernet port or by adding the optional USB WiFI adapter (the WLM-10UB1, $49.99). The player lacks internal memory to store BD-Live content, so you must add storage via the USB port. Because you need the USB port for storage, if you add the USB WiFi adapter for network connectivity, you can't access BD-Live content. The USB port also supports media playback. The player lacks advanced control ports, such as RS-232 or IR.

Read about the high points and low points of the BDX2150 Blu-ray player on Page 2.

High Points
• The BDX2150 supports BD-Live and BonusView Blu-ray features.
•
Toshiba has added more services to its Web platform this year,
including CinemaNow and YouTube. You can also stream content from a
network-connected server.
• The BDX2150 offers internal decoding and bitstream output of high-resolution audio.
• The BDX2150 is a very good value.

Low Points
• The BDX2150 does not support 3D playback.
• The player lacks analog A/V outputs, so it's not the best choice for someone who owns an older TV or A/V receiver.
• It does not have integrated WiFi; the optional USB WiFi adapter costs $50.
•
The player lacks internal memory to store BD-Live content. Because
Toshiba only included one USB port, you can't access BD-Live content
when the player is using the USB WiFi adapter (since the USB port is
already in use).
• There's no advanced control port like RS-232.

Competition and Comparison
Compare the BDX2150 with its competition
by reading the reviews for the Samsung BD-D5300
and Sony BDP-S380.
Learn more about Blu-ray players by visiting our Blu-ray Players section.

Conclusion
Toshiba's new BDX2150 is a value-oriented
player that's designed to provide the Blu-ray essentials at a budget
price. In addition to Blu-ray playback, you get a nice assortment of
Web-based services; Toshiba's platform isn't as extensive or
customizable as some of its competitors, but it does include big-ticket
items like Netflix, VUDU, YouTube, and Pandora. Even though you can add
wireless network connectivity to this product through an optional
adapter, the BDX2150 is a better fit for someone who has no plans to go
wireless. The WiFi route limits the functionality of this product. So,
if there's any chance you might go wireless in the future, I'd recommend
the step-up BDX2250 instead. Its MSRP is only $20 higher, and it has
built-in WiFi.