Tubi TV has announced that its free, ad-supported streaming TV network will now be available on Sony's smart TVs and Blu-ray players. Tubi TV has more than 40,000 videos in its library, from over 200 content partners--including Lionsgate, MGM, Paramount Pictures, Starz,... 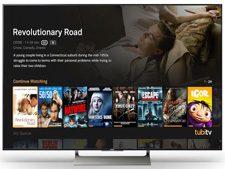 Tubi TV has announced that its free, ad-supported streaming TV network will now be available on Sony's smart TVs and Blu-ray players. Tubi TV has more than 40,000 videos in its library, from over 200 content partners--including Lionsgate, MGM, Paramount Pictures, Starz, and The Weinstein Company.

As part of the agreement, Tubi TV will be highlighted on Sony's homepage menu of featured apps, as well as all other Sony connected devices dating back to 2012.

Tubi TV is the fastest growing free TV streaming application and expects to accelerate its momentum in 2017 as consumers increasingly liberate themselves from expensive monthly cable bills in favor of streaming media devices and smart/connected TVs.

According to a study released in late 2016 by the consultancy cg42, pay TV providers are forecasted to lose nearly $1 billion in annual revenue as an estimated 800,000 customers nationwide move toward cutting their cable. Meanwhile, smart TV viewing grew by more than 65 percent in 2016, according to Pivotal Research. Additionally, more than 37 million U.S. households watched ad-supported shows on connected TVs in 2016, according to Modi Media, an ad buying division of GroupM focused on new TV advertising.

"Tubi TV's value proposition is straightforward and appealing to a growing number of consumers; we offer the largest ad-supported library of free premium movies and TV shows in the world," said Farhad Massoudi, Founder and CEO of Tubi TV. "With the number of smart TV users in the U.S. estimated to reach 190 million in 2017, we see tremendous opportunities for snowballing growth as viewers increasingly gravitate towards new ways of consuming entertainment. In response to this growing demand, we're working aggressively to expand consumer access to Tubi TV and having our streaming app on Sony TVs Powered by Android TV Sony Smart TVs and Sony Blu-ray players is a big step in that direction."