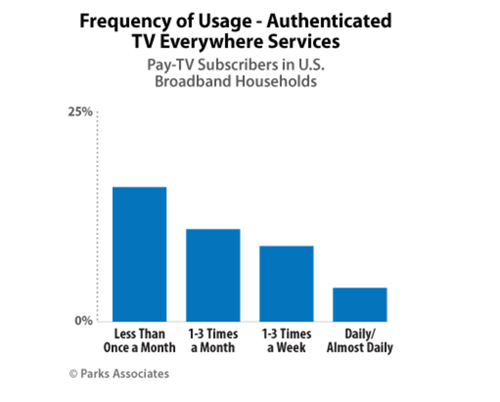 A recent article in Multichannel News provided new findings from Parks Associates showing that 40 percent of U.S. pay TV subscribers used TV Everywhere options in 2015, up from 22 percent in 2013. "TV Everywhere" describes streaming services provided to cable/satellite customers, allowing them to access streamed versions of specific channels like ESPN, ABC, or CNN if those channels are part of their pay-TV package. A growing number of providers offer TV Everywhere options, and customer awareness and usage continue to grow.

From Multichannel News
Offering another indicator on how TV Everywhere services are performing, usage of those authenticated offerings reached 40 percent of U.S. pay TV subs in 2015, up from 22 percent in 2013, according to a new study from Parks Associates.

The study - Entertainment Habits on Connected CE Devices – also took a look at the frequency of TVE usage, finding that 23 percent said they watch authenticated video at least once a month.

Those findings amplify some other recent studies that shined the light on TVE. For example, Digitalsmiths, the TiVo-owned maker of video search and recommendation services, found in its Q4 2015 Video Trends study that 40 percent of survey respondents said they are aware that their pay TV provider offers TVE apps, up 3.7 percent in two years, and up 13.6 percent over a three-year span.

Is "TV Everywhere" Finally Living Up to Its Name?