Consumer electronics are always hot commodities on Black Friday, with TVs leading the charge. This year, TVs seemed to be even more in demand than usual, Jeff Berman found, although that doesn't necessarily equal big profits for the retailers that open their doors early. 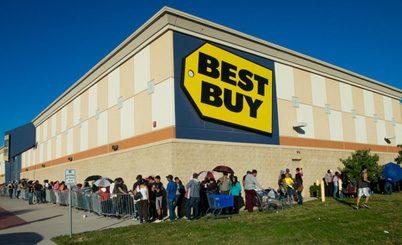 TVs have long been among the most popular consumer electronics product categories on Black Friday. Doorbuster deals have, after all, often included TVs at bargain-basement pricing, led in recent years by models from the low-rent manufacturer du jour. That (often Chinese) supplier has typically changed based on the particular year and retailer.

However, on prior Black Fridays, the popularity of TVs was often accompanied by one or two other CE categories that were also explosively popular. Tablets, for instance...or digital picture frames...or GPS devices...or videogame consoles (thanks to product launches that have typically come just ahead of Black Friday). On the latter front, think Nintendo's Wii, Microsoft's Xbox 360 and Xbox One, and Sony's PS3 and PS4, just to name a few of the most recent ones.

Well, digital picture frames have, for the most part, faded into obscurity, while GPS device sales have declined significantly due in large part to the growing popularity of smartphones that feature most of the same functionality. Although smartphones, tablets, and the two newest game consoles--the PS4 and Xbox One--were pretty popular items on Black Friday this year, there was little question that the vast majority of CE retail promotions for both that day and Cyber Monday was focused around TVs.

When I say Black Friday, what I'm really talking about is that relatively new, roughly one-and-a-half-day period that starts at some point on Thanksgiving and ends at some point in the middle of the night on Friday into Saturday. Apparently, U.S. consumers have largely decided that spending time with their families and enjoying a huge feast on one of the few major holidays that all Americans actually celebrate is no longer as important as schlepping off before dinner has even digested to stand in line outside of a retail store to get dibs on a doorbuster. Then there's the fact that there always seems to be a few people at every store (no matter how early you get there) who think nothing of missing Thanksgiving altogether so that they can camp outside more than one day in advance to get one of only five doorbuster TVs that the retailer has in stock.

TVs were so heavily in demand that consumers were buying models that weren't even featured in Target's Black Friday circular. Several shoppers were buying Magnavox 32- and 40-inch HDTVs at the Target in Levittown, New York, that I visited between 1:30 and 2:00 a.m. on Black Friday, long after the crowds had thinned out. Popular TVs at the Walmart in East Meadow, New York, between 2:00 and 2:30 a.m. on Black Friday included a 50-inch Emerson 1080p TV at $269 that was on the front page of Walmart's ad circular. Many Samsung TVs were being sold at the Sears in Hicksville, New York, after it opened its doors at 6:00 p.m. on Thanksgiving. Several of those models were featured in that retailer's circular. It wasn't exactly a surprise that Samsung TVs were the most popular TVs at the store that night, given that the vast majority of TVs that Sears carries is from that manufacturer.

Doorbuster TVs, especially Samsung models, were "very strong" sellers on Black Friday at the Target in Westbury, New York, said Klaus Woodward, the store's team leader. Along with many customers who were looking for bargain TVs, there were others who showed up to buy higher-end TVs that were also being discounted, he said. "We sold some 4K this time," he said, adding UHD was "just starting to get going" in terms of sales.

In recent years, 32-inch and 40-inch TVs were especially strong sellers on Black Friday at the Westbury Target store, said Woodward. But this time, along with the 32- and 40-inch units, the store sold "a lot" of 50- and 55-inch TVs.

"On Black Friday weekend, Best Buy shoppers bought hundreds of thousands of TVs, with tremendous interest in 4K TVs" across that retailer's stores, said Kevin Newlands, general manager of the Columbus Circle Best Buy store in New York City. That turnout was driven by advertised doorbuster deals, including a Samsung 60-inch 4K TV at $799.99 ($700 off) and a Toshiba 49-inch 1080p TV at $149.99 ($280 off), both Best Buy exclusives, he said.

"It was all about TVs, then more TVs and more TVs after that," said Stephen Baker, NPD vice president of industry analysis-consumer electronics, regarding this year's Black Friday. Although iPads and digital fitness devices seemed to draw some interest, "in general" it was TVs that were "clearly the real focus this holiday" among those retailers that sell them, he said.

In general, the most popular TVs seemed to be the ones featured in retailers' ads, said Baker. Samsung "did a lot with kind of mid-priced, mid-sized SKUs" from about 40 inches to 55 inches, he said. There was "a little bit less activity in the really, really large TVs that we've seen in the past," he said, telling us "those are just not very good Black Friday items." Samsung was "very aggressive and all over the place this year," he said. In comparison, LG, Sony, and Vizio were "a little less prevalent this year maybe than they've been in the past." Last year marked the first time that 4K TVs were advertised for Black Friday, and this year there were "ten times as many," said Baker.

The strong performance of TVs on Black Friday, unfortunately, doesn't necessarily mean great news for CE retailers. After all, TV margins are notoriously low. Therefore, if retailers couldn't sell a whole lot of accessories and extended warranties/protection agreements to the customers who bought most of those TVs, the profit generated could have been minimal at best. It's presumably no easy feat for retailers to sell those extra items to customers who are only looking for a bargain, especially when there's a long line of people behind those customers waiting to buy a cheap TV, too.

"In the last couple of years, we've had things like really, really cheap" Android tablets, cheaper notebook PCs, streaming speakers, and headphones, said Baker. Although those products sold on Black Friday this time, but "they didn't seem to have quite the impact that they've had in previous years," based on his visits to several stores in northern Virginia, including Best Buy, hhgregg, Kohl's, Staples, Target, and Walmart.

Despite the heavy focus on TVs in retailers' circulars and the strong TV sales that Baker and I saw at the stores we visited, the Consumer Technology Association (CTA, formerly the Consumer Electronics Association) told us that smartphones (often sold at carriers' stores) were actually expected to be the top-selling technology product through Black Friday week among the 56.9 million American adults who bought or were planning to buy tech products (see out the CTA's official statement here). The week included the Monday before Thanksgiving through Cyber Monday one week later.

Heading into the holiday season in September, CTA's consumer research showed that 17 percent of U.S. adults said they would or may buy a TV this holiday season, said Steve Koenig. However, there have been "stellar deals on TVs that likely motivated some neutral parties to buy" TVs, too. CTA's Black Friday week research found that TVs were the number-two tech product purchased during Black Friday week. About 23 percent of Black Friday shoppers polled said they bought a new TV during that week.

Another CE product category that seemed to fare well on Black Friday was the soundbar (some of which can also be lumped into the streaming speaker category). I saw many of them being sold at the Sears (Samsung and Nakamichi models) and Walmart (Sanyo models) stores I went to on Black Friday. "Soundbars have been a good category all year, so I have no doubt that they did pretty well" on Black Friday, said Baker. "They obviously have a pretty strong attach rate" with TVs, he said.

Best Buy also saw customers buy "twice as many wearables--smartwatches and health-and-fitness trackers--as they did a year ago," said that retailer's Newlands, who added that videogame products were among the other top sellers.

In addition to TVs, products that were in heavy demand at the Westbury Target store on Black Friday included the PS4 and Xbox One, along with the Apple Watch, iPads, and iPhones, said Woodward. Driving demand for the PS4 was the inclusion of a free copy of the game title "Uncharted: The Nathan Drake Collection" at $299.99. The console usually sells for $50 more than that, while the game has a $59.99 value. One obvious draw for customers to the Apple products was that Target offered free gift cards ranging from $80 to $250 to those who bought them.

In a change of strategy, Apple didn't do a Black Friday promotion at its own stores this year, opting instead to "pretty much outsource" its "aggressive pricing to all its partners," said Baker.

Outright duds on Black Friday, at least in New York, seemed to include one heavily-hyped new CE category: drones. The Westbury Target store sold "a few" of them after advertising a $394.99 Parrot Bebop HD video drone on the front page of its Black Friday circular, said Woodward. But, in New York, there is "still some trepidation around flying drones," he said.

Outside of product trends, there were several fights that broke out among shoppers on Black Friday, according to published reports from around the country, but apparently no trampling deaths as seen in years past. I suppose we can chalk that up as some form of progress.

Despite the continued growth of shopping online for the holidays, the "combination of Thanksgiving and Black Friday, I think in general," is generating enough shoppers for retail stores, said Baker.

There was, meanwhile, a slight surprise in terms of when consumers chose to shop this year, said Baker. "It definitely felt like there was a lot more traffic later at night on Thanksgiving. So, people were coming out and staying out for a while," he said. That didn't seem to happen the past couple of years.

Therefore, those of us hoping that more retailers will opt to remain closed on Thanksgiving next year and in the future will likely be sorely disappointed. As long as consumers keep showing their willingness to shop on the holiday and not wait until Friday, the more likely it is that most retailers will continue to give them what they want.

I'm waiting for a smart entrepreneur to spot an opportunity and start setting up food trucks selling turkey, stuffing, and other holiday favorites outside of major retail stores that are open for Thanksgiving. Even if there's no time to finish eating, shoppers may want to use the leftovers as padding on the backs of their legs and feet to deflect the shopping carts that other shoppers plow into them as they rush to desperately get one of those remaining two 55-inch $200 UHD TVs in the back of the store.

Did you brave the crowds to shop in local stores on Thanksgiving night or Black Friday? Or, are you more the Cyber Monday type? What kinds of products did you shop for, and what deals did you find? We want to hear from you in the Comments section.

You'll automatically be entered in the HTR Sweepstakes, and get the hottest audio deals directly in your inbox.
Author
Jeff Berman
When you buy through links on our site, we may earn an affiliate commission. Your support is greatly appreciated!
This is the static ad content. This is just a placeholder for now to get things styled.
Visit Website

Is It Worth Waiting for Black Friday AV Deals?