It appears the consumer electronics industry may have jumped the gun on the next generation of high definition home entertainment. The products are coming, but there may be some problems with the content. 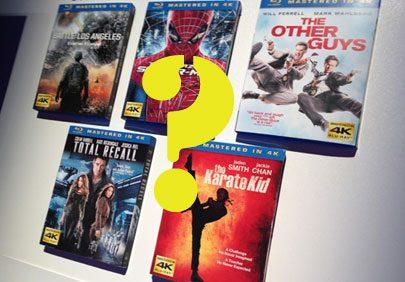 At this winter's 2013 Consumer Electronics Show, the one trend that you couldn't avoid in the convention center was the pending arrival of UltraHD displays. Sony, Samsung, LG, Sharp, Vizio, HiSense and others were all packing sets with the new 3,840 x 2,160 resolution, (claimed) higher bit-rate color and more. With people fixated on these large pixel-laden sets, there was no mistaking that this new level of HD is coming. The first sets are priced astronomically high, with retail quotes of $20,000 or more, but despite the prohibitive amounts, some early adopters are buying. Others, meanwhile, are asking the question, "How the heck do I get content in UltraHD?" A good question indeed.

In nearly every booth at CES 2013, there was talk of content streaming and how it is the future of UltraHD. Over time, streaming UltraHD is the future, as we are very likely headed to a "disc-less future" but getting to that reality is going to be a long, rough road of technological change. Reports from sources like CNET.com suggest that Netflix alone makes up for as much as 33 percent of the peak bandwidth on the Internet. Netflix isn't the only company streaming content today and remember that's in highly compressed standard definition formats. UltraHD represents digital packets that will almost assuredly be larger and thus could take up much more of the bandwidth of the Internet in the United States as we know it. Other pressing streaming UltraHD issues include the idea that, even for homes wired with fiber optic Internet from providers like Verizon's FIOS, AT&T's U-Verse or even Google's Fiber, nearly all of those homes are only connected to fiber at the street. Very few of these customers are wired for fiber optics from the street to their homes. Going deeper, even fewer of these homes are wired with LANs that have CAT-5 or CAT-6 wiring that can accommodate the large bandwidth that fiber optic Internet can offer. It's hard to tell how satellite TV providers like DirecTV and Dish Network will be able to broadcast UltraHD using their systems. Considering it's a digital packet, one would assume it could pass through "the bird" with ease, but that is completely uncharted territory at this point in the development of UltraHD. Most homes internally use wireless networks and today's wireless systems can be plagued with issues, yet a new higher bandwidth 802.11 AC format with 1.3 gigabit per second speeds was shown at CES this year, offering more hope for making streaming content meaningful in a world where we will soon have UltraHD sets on store shelves.

The great hope in the IT and streaming video community is that a new compression format called H.265 offers a chance to greatly reduce the "footprint" of streaming video via the Internet. Some reports suggest that H.265 can cut bandwidth use in half, potentially making room for larger files and/or impending growth of streaming content via the Internet. Getting H.265 to market could be tantamount to people in large numbers embracing solar power, thereby easing demands on the current electrical grid. Do we need a new, more modern electrical system? Absolutely, we do, but that isn't cheap and or easy to implement. The same goes for the next generation of Internet connectivity. Five years from now, we will look back at the current Internet that we take for granted today and look at us the way us old-timers look at the days of dial-up via a modem to our AOL or Earthlink accounts.

The rush at CES is to get to a disc-less future, which is a future that nearly everybody suggests is coming - the question is, how long will it take? It won't be overnight, that's for sure. There is a question regarding whether or not Blu-ray can playback UltraHD today. The short answer is, amazingly, no. It was only days ago that the Blu-ray Disc Association launched a task force to look into the feasibility of delivering UltraHD on Blu-ray discs. Considering 4K has been around for years in the world of Digital Cinema, the idea that the powers behind Blu-ray weren't prepared for some form of UltraHD or 4K playback is remarkable. UltraHD has been a wave that everybody in the video community has seen coming for years. The fact that Blu-ray wasn't first to paddle out and ride it is nothing short of astonishing. Will Blu-ray be first to market with meaningful UltraHD content? It's absolutely possible. Reportedly, H.265 is helpful in getting UltraHD content onto a Blu-ray disc and playing it back in a more efficient way, which is promising. At the same time, the convenience and mainstream appeal of streaming content is undeniable. People just love having what they want when they want it, and streaming offers just that.

There are some, like HomeTheaterReview.com's managing editor Andrew Robinson, who suggest that there might be enough space on the Internet today to offer the type of streaming that we need to make one hell of a video image, but it's the business model of the Internet providers get in the way. The likes of Time Warner, Comcast, DirecTV and others who sell you your Internet connectivity also sell you your content - often at pretty high prices. If you can strip your cable/Internet package down to the lowest levels while streaming IPTV or streaming versions of your favorite TV, sports and movies via the Internet, the Internet providers lose their viselike grip on your cable/satellite money. That's not something that these multi-billion dollar companies are likely to embrace enthusiastically. With that said, the likes of Apple and Google are rumored to be looking into ways to get into the IPTV business, where you could potentially buy television channels on a per-channel basis, not in the bundles or packages that you have to purchase now. It could be a game-changing concept, but it likely won't happen before an anti-trust lawsuit or three.

What comes next for UltraHD? There will be UltraHD television sets on the market sooner than later for the early adopters who are willing to spend the big bucks. Sony showed a mysterious 4K server that supposedly yo
u will not own (it's some sort of lease) that will have a demo reel of UltraHD content that can be used to show your friends what your gleaming new set can actually do. While that is an admirable step forward, it's not very sustainable long-term. By the 2013-14 NFL season this fall, there will be quite a few UltraHD sets on the market from lower-priced players like Vizio and HiSense. These sets, along with models from Samsung, Sony, Sharp, Panasonic and others, will offer scaling options from 1080p to UltraHD, which is pretty much what UltraHD is going to be until the content delivery system is launched effectively. Will 1080p look better scaled up to UltraHD? It sure will. Will you have to throw your brand new 1080p HDTV out to get in on UltraHD the day it comes out? Likely not, unless your set is on the fritz, as the real UltraHD content is going to take a while to get to us, either via streaming or Blu-ray.

Could H.265 Compression Bring 4K to Blu-ray and/or Streaming Media?