4K Ultra HD, Feature News Stories
Published On: March 19, 2018
We May Earn From Some Purchases Via Affiliate Links

Dolby Vision HDR continues to gain traction with TV manufacturers. When HDR-enabled TVs first began to appear on the market a few years ago, the majority of them supported only HDR10, the open-standard High Dynamic Range technology that is also the only mandated HDR format in the Ultra HD Blu-ray spec. If you want to learn more about the similarities and differences between Dolby Vision and HDR10, check out this story.

Dolby Vision first appeared in VIZIO TVs, but the list of manufacturers that now support the format has grown steadily and includes VIZIO, LG, Sony, TCL, and Philips. Most HDR-capable TVs from those manufacturers support both HDR10 and Dolby Vision (as well as HLG, which you can learn more about here). Samsung is the only top-tier TV manufacturer that has not embraced Dolby Vision; instead, the company is promoting HDR10+, the follow-up to HDR10 that functions a bit more like Dolby Vision in its support for dynamic metadata (more on this in a second).

So far, I’ve reviewed two Dolby Vision-capable TVs: the VIZIO P65-E1 and the TCL 55P607. If you read those reviews, you may have noticed that, in the Measurements section, I focused exclusively on how the TVs measure with HDR10 content. Since all of the other HDR-capable TVs I’d measured up to that point only supported HDR10, to provide meaningful comparison I measured the VIZIO and TCL TVs in the same format.

Then there’s the fact that I simply lacked the equipment I needed to walk through a Dolby Vision measurement/calibration process. I didn’t yet own test pattern generator capable of outputting Dolby Vision test patterns (they are not cheap!), and my PC laptop can’t output them, either (it doesn’t have the right type of video card).

The TCL TV has since gone back to the manufacturer, but VIZIO was kind enough to let me hold on to my sample of the P65-E1 a bit longer while I tried to secure a DV-capable generator. I was determined to get at least one pass at a Dolby Vision measurement process, just to see for myself how it compares with the HDR10 process.

Thankfully, Murideo graciously agreed to loan me one of its Fresco SIX-G pattern generators ($2,495), which is a sleek little handheld pattern generator that’s really easy to use. It can connect to your laptop via either RS-232 or USB, and it has one HDMI 2.0a output that can pass a full 18-Gbps signal with or without HDCP 2.2. It carries a complete suite of ISF test patterns, and you can upload additional patterns via a handy PC app. The SIX-G supports Dolby Vision signal output at a 1080p resolution.

With my new pattern generator in hand and the VIZIO P65-E1 still set up in my testing room, I walked through my first Dolby Vision measurement process. Some of the specifics I’m about to share may be interesting only to calibrators and the geekiest of our videophile readers, but my hope is that this overview will give everyone a better understanding of our measurement/calibration process in general and to understand some key differences between Dolby Vision and HDR10.

As I said above, HDR10 is an open standard–the key word here being “standard.” When it comes to measuring and evaluating TVs, there are specific standards by which the accuracy of a TV can be judged. To learn more about those standards and our measurement process, you might want to read this story first. As part of its standard, HDR10 uses the same color temperature as SDR high-def content (D65, or around 6500 Kelvin), and it currently targets the DCI-P3 color space used in theatrical cinema (Rec 2020 is the actual standard, but no TV can do that yet) and the ST.2084 electro-optical transfer function (EOTF is the method of converting the signal to visible light, aka the new gamma). We can measure every HDR10-capable TV to directly compare its performance against the standard, and thus directly compare each TV against the others.

The Dolby Vision measurement/calibration process was originally designed to work a little bit differently, since Dolby Vision isn’t a general standard. DV is its own closed, end-to-end solution, from the filming of the movie to the editing/post-production process to its display on a DV-capable TV. Granted, many of the current DV targets are the same as HDR10: a D65 color temp, DCI-P3 color, and the Perceptual Quantization (PQ) EOTF, which is the same as ST.2084. Each piece in the DV chain knows exactly how the signal is supposed to look; but, as we all know, not every TV performs the same. Dolby Vision is supported by high-end OLED TVs and entry-level LED/LCD TVs alike. What Dolby does as part of the certification process is look at the exact capabilities of a particular TV model and create dynamic metadata that will “map” the signal accordingly.

In other words, a certain film may have been mastered on a studio monitor capable of perfect P3 color and 4,000 nits of brightness. No consumer TV can do 4,000 nits right now, and many fall somewhat short of P3 color. So, when the DV signal arrives at the TV, the tone, brightness, and color must be remapped on a scene-by-scene or frame-by-frame basis so that the image looks as close as possible to what the director/mastering engineer intended, within the TV’s limits. (For the record, HDR10 does tone mapping, too. It just doesn’t do it on the more precise scene-by-scene basis, and the TV manufacturer decides how it’s done, which could be different from how the post-production people want it. The Dolby Vision process is more controlled.)

So, from a measurement/calibration perspective, the original Dolby Vision process differs from HDR10 because, instead of using a standard reference like P3, you use a reference that Dolby created for that particular TV model. Dolby measures a handful of samples of a certain TV model–say, the VIZIO P65-E1–and determines the best results. It then creates a target file, called the Golden Reference Target, for that particular TV model, which you use as the reference in the CalMAN measurement software, in the Dolby Vision workflow. Your results will tell you how close to the ideal P Series TV your review sample gets.

Let’s look at the specifics of this process, using the VIZIO P65-E1 as our guide. First, your calibrator–or you, if you own the needed measurement equipment–must get the Golden Reference Target file for a particular TV (either from CalMAN or the manufacturer) and import it into CalMAN like this: 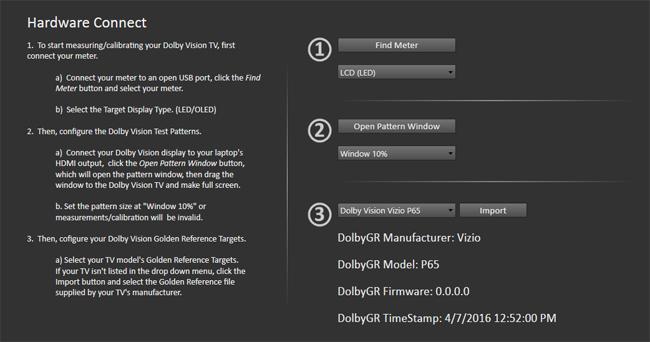 To confirm that the import was successful, you can check that CalMAN is using the correct Target file by pulling up the Workflow options:

When connecting your test pattern generator, you also need to make sure that it is set up to output Dolby Vision patterns. The workflow includes a step in which you can confirm with a test pattern that the TV is in Dolby Vision mode.

From there, the measurement/calibration process is pretty much identical to that of the HDR10 measurement process. I measured the P65-E1 in its default Calibrated Dark picture mode. Here are the gray scale results. 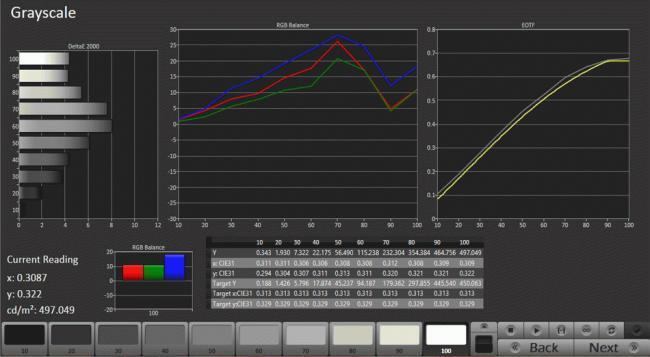 In the chart above, the three lines in the RGB balance represent the TV’s color temperature; compared with the D65 target, this TV by default veers a bit blue. If you were calibrating the TV, you would now use the VIZIO’s 2-point and/or 11-point color-temp controls to try to tighten up those lines to bring them as close together as possible.

The main difference in this page between HDR10 and DV is in the EOTF results to the right. Here, the yellow target line is the P65-E1 Golden Reference Target, and we can see that this particular P65 sample tracks a bit over-luminance compared with the ideal P65 reference. We also learn on this page that the maximum light output of this TV with a 100-IRE signal in a 10 percent window is about 497 nits. 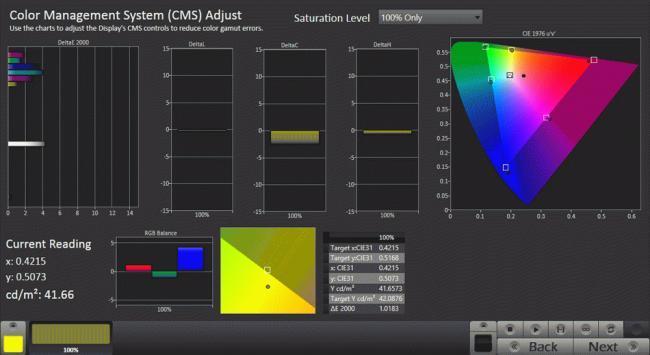 Again, we’re looking at how close this P65-E1 sample gets to the Golden Reference Targets, and it comes pretty close. The Delta Error (box at the upper left) is just a bit high for blue and cyan. At this point, you would use the TV’s color management system to try to get the six color points as close to the reference as desired, just like you would do in an HDR10 or standard HD calibration.

That’s a general overview of the Big Two in the calibration process (gray scale and color points). The Dolby Vision workflow has a couple other steps and many different configuration options that calibrators can use, but I’m not going to get into all of that here. I will point out that, after you calibrate the TV using Dolby’s Golden Reference Target–which is, in a sense, making your P65-E1 the best P65-E1 it can be–you could then change the targets to general P3 and ST.2084 settings to see how the P65-E1 compares with other TVs on the market.

Now, you may have noticed that, several times in this story, I used the word “original” to describe the Dolby Vision measurement process. That’s because, when I sent my first draft of this story to my Portrait Displays/CalMAN rep to look it over, he told me something interesting: As more TVs add Dolby Vision capability, it’s getting harder to get the TV manufacturers to release Golden Reference Target files for each TV model. So, the company has had to rethink the DV measurement/calibration approach a bit. With that mind, this article has now become part one of a larger story; stay tuned for part two, in which I talk about how the process is evolving.

In closing, I want to mention that this is an interesting time for TV reviewers; we’re kind of stuck in an in-between period. Most of the TVs I now review are UHD TVs that are capable of HDR, and of course I need to measure those performance parameters. But most of the content you’ll watch on the TV is probably still standard HD content with standard dynamic range. So I need to measure that, too. I’ve made the choice for now to focus, in our Measurements section, on standard HD and HDR10 performance results. If we reach the point where Dolby Vision becomes as ubiquitous as HDR10 (and we’re getting closer), then I might just have to rethink my approach. I welcome your feedback in the Comments section below.