There are plenty of universal remotes on the market, but few outside the Crestron or AMX class of controllers can easily handle a large home theater system. Universal Remote Control's new MX-980 bridges the gap between the simpler remotes commonly... 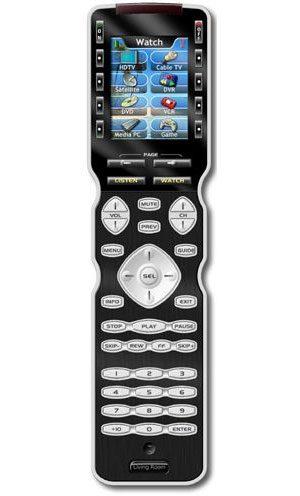 There are plenty of universal remotes on the market, but few outside the Crestron or AMX class of controllers can easily handle a large home theater system. Universal Remote Control's new MX-980 bridges the gap between the simpler remotes commonly found at mass market retailers and the multi- thousand-dollar control systems. The $599 MX-980 is sold through custom installer channels. If you find that you can get by with a less powerful remote, Universal Remote Control also offers models that are sold through normal retailer channels and that you can easily program yourself.

In order to get the full benefit of the MX-980, I recommend having it professionally programmed. Most systems can probably be programmed for a few hundred dollars, far less than the cost of programming a traditional Crestron or AMX system. The MX-980 can be programmed by any USB-equipped Windows-compatible computer. The remote itself is a wand-type remote with a large color LCD screen at the top. The screen can display the supplied graphics, or you can import your own. The remote features a motion sensor that will light up the device when it is picked up to save the battery life of the lithium ion battery. Other features include either standard or narrow band RF (in case of interference from nearby electronics), as well as IR capability.

The real strength of the remote comes with its flexibility to control nearly everything. The MX-980 can be coupled with URC's MSC-400 base, which will provide the triggered macro capability, RS-232 and relay controls and video and voltage sensors. The URC software provides the installer with the basic code sets for most popular products to make programming easier (and reduce programming costs). These sets can be easily integrated into macros to make complete system control available to any user. For example, in my system, I simply pick up the remote and press "On," "Watch" and "PS3." This will cause the remote to determine which components need to be powered on, turn them on if they are not already on, then switch all the gear in the signal path to the proper input. URC has recently partnered with Lutron, so that you can even integrate your lighting into a macro if you so choose.

Read the High Points, The Low Points and the Conclusion on Page 2

High Points
• The MX-980 is very easy and intuitive to use, compared to other remotes in its class.
• This is part of an amazingly flexible and intelligent control system that can perform many, though not all, of the functions of a home automation system.
• The open programming architecture allows for easy modification and customization by the programmer or savvy consumer.

Low Points
• The MX-980 is best when programmed by a professional.
• You will need to have someone re-program your remote when you change out gear, much like clients do with a Crestron, AMX or Control 4 remote or automation system.
• The LCD screen eats up battery reserves more than did other remotes I have used.

Conclusion
The MX-980 by Universal Remote Control is a powerful and versatile piece of equipment. I think it is overkill for a small and simple system, but is just the ticket for a larger system whose control benefits from automation and macros. In the past, one would need to spend thousands of dollars to get this type of control and versatility. A MX-980-based control system can be set up to control most theater systems with smart macros and basic automation for $1,000 to $2,000. While this might seem like a lot of money for a remote, it is a bargain. The remote control is the central interface between the user and your system. No matter how good your theater sounds or looks, what good is it if your significant other or guests need an owners' manual in order to turn it on? The MX-980's sensors, triggers and intelligent macro capability lets anyone walk in and use your system with a few simple keystrokes.