For a while, Visual Apex has been in the business of selling affordable projectors from big manufacturers. Now, they are launching the VAPEX9100SE electric screen to accompany these projectors. Adrienne Maxwell puts it to the test. 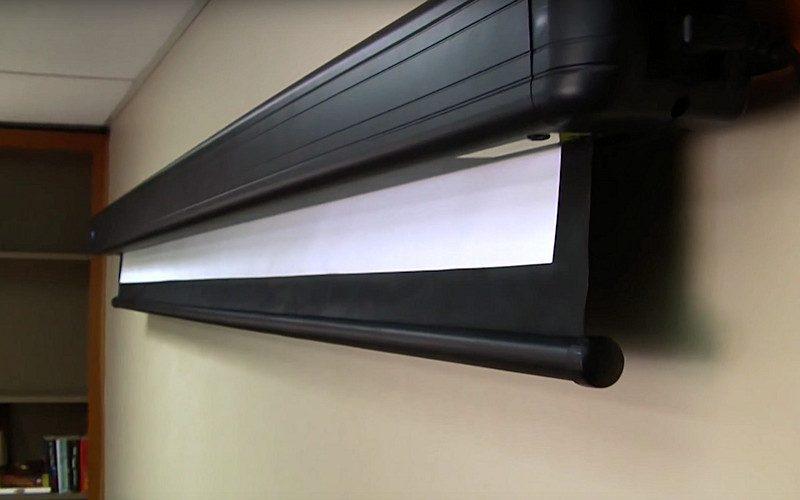 You may know Visual Apex as an online retailer of projectors and projection screens, but did you know that the company also sells its own line of fixed-frame and electric screens, offered at highly competitive prices? The VApex line of electric screens includes both tensioned and non-tensioned models, in screen sizes from 92 to 135 inches (diagonal). I received a review sample of the VAPEX9100SE, a 100-inch, 16:9, non-tensioned, drop-down screen that uses a glass-fiber matte white material with a 1.1 gain. (Both the fixed-frame and tensioned drop-down models use a different screen material called Cinema White.)

Despite its low asking price of just $279, the 9100SE is a highly versatile screen with a lot of worthwhile features. The package includes both an RF remote control and a wireless 12-volt trigger that allows you to easily set up the screen to automatically drop and rise in sync with projector power-up/down. There's also an RS-485 port and cable for integration into a more advanced control system. The screen has black backing to prevent light penetration and about 1.5 inches of black border around the sides and bottom, plus 18 inches of extra black drop at the top, which gives you more flexibility to position the screen as your projector's throw angle demands.

The 9100SE's build quality was more impressive than I expected at this price point, with a sturdy aluminum casing and matching L-shaped brackets that allow for ceiling- or wall-mounting. The package includes 1.25-inch wood screws and plastic wall anchors to attach the L brackets to your wall or ceiling, but I went ahead and used the three-inch lag bolts that were already in the studs in my ceiling from a former screen installation. The screen weighs about 30 pounds, so I felt more comfortable sticking with the longer woodscrews over the shorter options that came in the package. In my case, setup was simple because my husband and I have done this before; one especially helpful feature is the ability to easily shift the screen case from side to side within the L brackets in order to fine-tune the placement. If this is your first screen install, be aware that this is definitely a two-person job, and be warned that the manual isn't much help. It's written in broken English (the screens are produced in China), and it consists primarily of small diagrams that don't offer a lot of guidance. Visual Apex's dedicated screen website offers an installation video, but it skips over the basic mounting procedure and goes right to setting up the 12-volt trigger and locking the screen drop at a desired length. Visual Apex has a reputation for excellent customer service, so don't be afraid to give them a call if you need assistance with the physical installation.

When I first lowered the screen, the glass-fiber material came out looking fairly smooth. Of course, a non-tensioned screen is never going to be as taut as a tensioned or fixed-frame model. The 9100SE had a few small curves near the outer edges, but nothing significant enough to blatantly affect performance, and the material continued to smooth out over a few weeks of use. The motor is not whisper-quiet, nor is it obnoxiously loud. Using an SPL meter, I got an average reading of about 30 decibels in my room.

I tried out the screen with two different projectors, the Sony VPL-HW30ES SXRD projector and the Epson Home Cinema 1080 LCD projector, and I was impressed with its quality. Brightness uniformity was very good across the screen, with no blatant hot-spotting in the center. The screen material's texture is fine enough to not introduce any significant footprint of its own. Sitting within ten feet of the screen, I saw nothing to visibly detract from or interfere with the quality of the projected image.

Read about the high points and low points of the 9100SE on Page 2.

High Points
The VAPEX9100SE has good brightness uniformity with no blatant hot spots, and it reveals a clean, neutral image without introducing its own artifacts.
The package includes an RF remote control, a wireless 12-volt trigger and an RS-485 connection and cable.
The build quality is very good, with an aluminum case.
The supplied L-brackets allow for wall- or ceiling-mounting, and you can shift the screen case within the brackets to position the screen as needed.
The screen includes 18 inches of extra black drop at the top to better accommodate your projector's throw angle, and it's easy to adjust the amount of drop you want.
The glass fiber material is washable and mildew-resistant.

Low Points
The owner's manual is vague and poorly written (the company says it is currently updating the manual).
The package doesn't include the wider variety of screws and wall anchors that you might get with a more expensive screen, or perks like a bubble level to help with the installation process.
Non-tensioned screen material isn't as perfectly flat and taut as a tensioned or fixed-frame screen.

Comparison and Competition
In the arena of affordably priced motorized screens, Visual Apex shares company with the likes of Elite Screens, Da-Lite, Draper and Vutec. Elite Screens' Home2 Series of non-tensioned drop-down screens includes the standard HOME100IWH2 and the HOME100IWH2-E24 with an extra 24 inches of black drop at the top. The company also offers the more budget-oriented VMAX2 Series that is closer in price to the 9100ES. Other options include the Da-Lite Slimline Electrol, the Draper Baronet and the Vutec Lectric I. You can find even more screen in the HomeTheaterReview.com video screen section.

Conclusion
The majority of home theater projectors that Visual Apex sells are in the sub-$3,000 category - from Epson, Optoma, Panasonic, BenQ and Mitsubishi - so it makes a lot of sense for the company to offer its own line of value-oriented screens to go along with those projectors. The VAPEX9100SE is indeed an outstanding value amongst electric screens, but it isn't just a no-frills budget screen to be added to your projector purchase as an afterthought; it also happens to offer good performance and a thorough list
of control options, which makes its low asking price even more enticing. If you're looking to put together a big-screen HT system on a budget, the VPEX9100SE should not be overlooked.