Vizio is ready for the holiday season with the company's new lineup of LED HDTV models and soundbars to complement those new televisions. Oh, and yes, the screens are rather big. 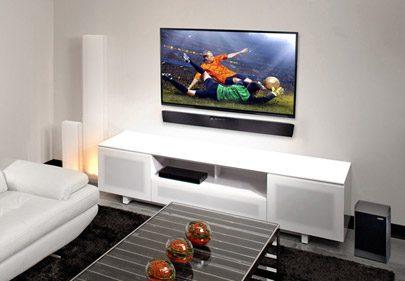 VIZIO's 70", 60", 50", 42" and 32" Smart TVs feature VIZIO Internet Apps with built-in WiFi for entertainment options and instant access to Netflix, Amazon Instant Video, VUDU , Hulu Plus, YouTube, Pandora, Facebook, Twitter and others, all with the push of a button on the smart remote.

The new E-Series and M-Series Sound Bars amplify the TV-watching experience by offering advanced audio quality in a compact design to fit any space. The latest SRS technologies featured in the 2.0 and 2.1 models limit unwanted volume fluctuations and allow for a more immersive surround sound experience.

The new line-up of sound bars pumps out 95 - 101dB of sound with reportedly less than 1% total harmonic distortion. The E-Series (SB4021E) and M-Series (SB4021M) 2.1 Home Theater Sound Bars feature wireless subwoofers. All sound bars connect easily to most HDTVs with just one cable.

All E-Series LED TV units as well as the 2.0 and 2.1 E-Series and M-Series Sound Bars will be available both in-store and online through key retailers such as Walmart, Costco, Sam's Club, Target, Amazon and VIZIO.com.