Vizio is bringing something really big to the marketplace with their 2012 line of HD televisions. Literally. Vizio is releasing the company's new CinemaWide television line that features models with a 21:9 aspect ratio amongst other impressive features. 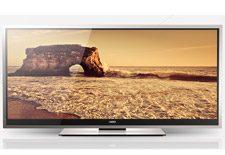 VIZIO just announced the introduction of the first CinemaWide HDTVs with Theater 3D and VIZIO Internet Apps (V.I.A.). CinemaWide HDTVs are the ultimate display for cinema enthusiasts to enjoy films as they were created for the movie theater, in the CinemaScope 2.35:1 aspect ratio without the black bars as seen on conventional HDTVs.

CinemaWide HDTVs feature V.I.A. functionality with the unique ability to allow users to view apps side-by-side with full-size and full HD resolution 16:9 programming.
Three CinemaWide sets are being introduced - the 50-inch XVT3D500CM, the 58-inch XVT3D580CM and the 71-inch XVT3D710CM.

Big-budget Hollywood blockbusters and the majority of new productions are filmed in the much wider 2.35:1 or 2.39:1 aspect ratios, while today's HDTVs have a standard aspect ratio of 16:9.

CinemaWide HDTVs have the ability to display films in their native CinemaScope aspect ratio, as well as intelligently scale up 16:9 content so users can enjoy a more immersive experience from all their favorite titles, from classics to today's latest films, without the distraction of black bars and loss of valuable screen real estate.

With CinemaWide HDTVs, users can enjoy interactive TV through an enhanced smart TV experience using the V.I.A. platform. CinemaWide HDTV ensures a seamless V.I.A. experience when watching TV by displaying apps side-by-side next to a 16:9 full HD image. CinemaWide LCD HDTVs are the first sets in the market to offer this capability, allowing users to simultaneously browse and use V.I.A. on the left side of the screen without missing anything from their 16:9 programming on the right.

Navigating the V.I.A. platform is accessible from anywhere in the room, thanks to the Bluetooth universal remote control with its integrated QWERTY keypad.

All CinemaWide HDTVs can also display 3D content delivered from a 3D-capable source, such as a 3D Blu-ray player, set-top box, or gaming console.

The accompanying Theater 3D eyewear is battery-free, lightweight and comfortable. Up to four pairs of Theater 3D glasses are provided with each set, and are also available in a rapidly growing range of styles and colors from brand name designers. They can even be used in most 3D movie theaters.

The 50-inch XVT3D500CM and 58-inch XVT3D580CM feature VIZIO's Edge Lit Razor LED backlight LCD with Smart Dimming technology. VIZIO's Smart Dimming intelligently controls each set's array of LEDs, which is organized in zones. Working frame by frame, based on the content being displayed, Smart Dimming adjusts brightness in steps down to pure black (where the LED is completely off).

The 71-inch XVT3D710CM takes performance to an even higher level, using VIZIO's Full Array TruLED backlighting with Smart Dimming technology. Using over 120 zones across the entire display, TruLED backlighting is able to control specific areas of the image to a much finer degree than edge-lit sets, resulting in even deeper blacks and higher contrast.

For more information on when CinemaWide HDTVs will be available visit Vizio's website.