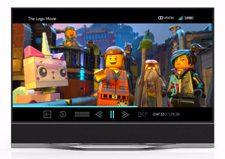 VIZIO has announced official pricing for its much-anticipated Reference Series Dolby Vision-enabled UHD TVs: the 65-inch RS65-B2 will be priced at $5,999.99, and the 120-inch RS120-B3 will be priced at $129,999.99. Both models can be special-ordered via the VIZIO website, to be delivered and set up by a local custom installer.

From Vizio
VIZIO, Inc. and Dolby Laboratories, Inc. have announced pricing and availability of the all-new VIZIO Reference Series, the industry's first-ever complete High Dynamic Range solution with Dolby Vision playback technology. Offered at an MSRP of $5,999.99 for the 65-inch class model (RS65-B2) and $129,999.99 for the 120-inch class model (RS120-B3), the premium collection is packed with groundbreaking innovations designed to make cinephiles rejoice. Equipped with Ultra Color Spectrum for a wider color gamut, and a quantum dot panel in the 65-inch class model, the high-end Reference Series features an 800-nit, Full-Array LED backlight and 384 Active LED Zones for a stunningly vivid Ultra HD picture. Customers will receive immediate access to certain Warner Bros. Home Entertainment 4K Ultra HD Dolby Vision mastered titles via the popular video on-demand streaming service, VUDU. Additional Dolby Vision titles from other content providers will soon be available through Netflix. Interested consumers can submit their orders now at VIZIO.com and will then be contacted by a local custom installer to arrange delivery and a white-glove setup service.

Designed for cinephiles and high-end home theater enthusiasts, the premium Reference Series collection pushes the boundaries of brightness, color and contrast. Unlike most TVs, which can only reproduce Rec. 709--the long-time color space standard--the Reference Series features Ultra Color Spectrum technology for a wider color gamut, with a quantum dot panel in the 65-inch class model, rendering colors closer to the range a human eye can see. The incredible picture is enhanced further by a Full-Array 800-nit LED backlight with an unprecedented 384 Active LED Zones, enabling a wider range of luminance and precise contrast control.

Consumers can enjoy Dolby Vision content right away on the VIZIO Reference Series through streaming partner VUDU. An ongoing list of upcoming titles available for streaming in Dolby Vision can be found at VUDU.com/UHD.