Vizio is making some rather big moves into the the big screen HDTV game. The newest is the 70-inch Razor LED HDTV. Andrew Robinson puts this big screen to the test to see how it holds up. 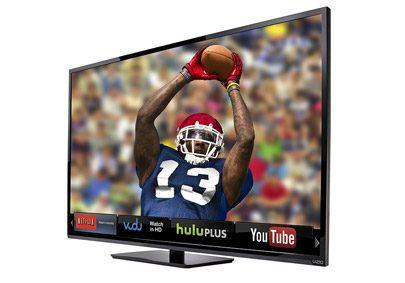 About a month ago, I reviewed a truly stellar and affordable Vizio display, the 60-inch E601i-A3that falls under the brand’s new E-Series. That display, despite not having full CMS control, still managed to pump out a very natural and pleasing image, and one that measured better than both me and my calibrator friend Ray Coronado could’ve ever imagined. It was so good that it was awarded a near-perfect score by yours truly – a score I wholeheartedly stand behind. Fast forward 30 days and what do I have before me but another fabulous E-Series display from Vizio, only this one measures 70 inches diagonal. Its retail cost? Try under two thousand dollars – $1,999.99 to be exact, though rumor has it that the street price is going to be lower. But is the 70-inch E-Series as good as the 60?

For starters, the new 70-inch E-Series (model number E701I-A3) looks identical to the 60, minus the fact that it’s 10 inches larger diagonally. The 70 measures roughly 62 inches wide by 37 inches tall and a little over two inches deep, without its included stand. If you factor in the stand, the width increases to 12.56 inches. Weight without the stand is stated to be 78 pounds while the 70’s weight with the stand jumps up to roughly 87 pounds. For a 70-inch anything, these figures aren’t unreasonable, especially if you consider that my 50-inch Panasonic plasma weighs as much, despite being 20 inches smaller diagonally. In terms of inputs, the 70 treats you to the same options found on the 60, which include four HDMI (two side, two bottom), one component, one composite, a VGA, an RF (for internal tuner), an Ethernet and two USB 2.0 inputs. Output options include a single digital audio out (SPDIF) and a single pair of analog audio outs, all located along the bottom of the 70’s input panel.

Behind the scenes, the 70 is a native HD panel, boasting a resolution of 1,920 x 1,080. It is an edge-lit design, meaning the 70’s backlighting is located along its right and left edges, but hidden from view underneath its narrow bezel. Color is said to be 10-bit, though all of your source components are going to feed it a steady diet of 8-bit for the time being, so it technically can display more color than you’re used to seeing, unless you connect it to your desktop computer for some gaming. Contrast is stated to be a million to one (dynamic), with a reported screen refresh rate of 120Hz. Like the 60, the 70 is also listing its viewing angle to be 176 degrees, though I still believe that to be optimistic. The 70 has the same 10-watt internal speakers as the 60 does, and also boasts the same audio enhancements such as SRS TruSurround HD, SRS StudioSound and SRS TruVolume. The 70 is a “smart TV,” in that it comes equipped with Internet apps that include Netflix, Vudu, HuluPlus and more, all of which are accessible at the touch of a button and work via the 70’s wireless (802.11n) or wired Internet connectivity. The 70 is not a 3D-enabled display (so sad) nor does it have any sort of Bluetooth connectivity. The 70 can, however, connect to your home network either wirelessly or via a direct connection, allowing it to stream personal or locally stored media files, including music, movies and photos.

Which brings me to the remote, which in this case is the same two-sided affair found with the 60-inch, as well as other Vizio displays. The remote is roughly the size of a modern smart phone and features a full keyboard across its backside for use in Internet searches or tweeting. Yes, you can tweet and watch TV at the same time via the Vizio. The remote is not backlit, though it is rather intuitive in its layout and use.

Since the 70, like the 60, lacks CMS, it technically cannot be calibrated to absolute perfection. However, you can set grayscale accurately, which works miracles on the rest of the display’s image accuracy. From there, it is possible to get almost the rest of the way there by adjusting color and tint. Still, for those unwilling or without the funds to pop for professional calibration, the movie image preset looks natural to the eye straight out of the box. You can adjust brightness and contrast using a test disc like Digital Video Essentials and improve your viewing experience even more without having to spring for full THX or ISF calibration, though for best results, it’s wise to hire a professional. Still, with mere grayscale, color and tint adjustments, the 70 produces one hell of a surprising image. Light uniformity is above average, though not perfect, besting most edge-lit displays on the market today, but not equaling what can be had with full panel backlighting or with, say, a plasma-based design. If I had to grade it, I’d give it an A-, as some light bleed is visible when viewing 100-percent black patterns and there is some nonwhite present on 100-percent white patterns. On the flip side, when viewing actual content, these errors go largely unnoticed. Black levels are again very good, rivaling the best among its edge-lit peers, but again, not as good as plasma. Highlights are very composed and overall contrast is again very, very good. For lack of a better description, the performance I enjoyed via the 60 is present and accounted for with the 70, without any editorializing or weakness on account of its added real estate, which is remarkable. Motion is smooth and, whether Blu-ray, broadcast or even streaming, the image quality is superb and wholly enjoyable. It rocks.

Read about the high points and low points of the 70-inch Vizio on Page 2.

High Points
The 70’s fit and finish is again superb, looking more the part of a high-end product than its asking price or brand affiliation may lead you to believe.
Despite packing 10 more inches of real estate, the 70’s light uniformity doesn’t suffer, nor does its ability to dish out a bright, punchy but natural image for the whole family to enjoy.
The semi-gloss or matte screen works wonders in curbing reflections and minimizing the effects of overhead or nearby lights.
The overall image quality of the 70 is of a very high caliber and among my current favorites when discussing edge-lit LED-based designs. I find it staggering just how good an image I was able to achieve and enjoy from such a large display at such a reasonable price.
The built-in wireless functionality is fantastic and the connection, provided your home network speed is up to snuff, is robust enough to accommodate full HD streaming via Vudu without fail.

Low Points
The 70’s lack of CMS means you can’t make it 100 percent pixel perfect in terms of color, but believe it or not, after setting the white point and adjusting color and tint, you can get very, very close.
The keyboard on the back of the remote is very handy. However, it is a little touchy in terms of its responsiveness, as it sometimes requires two or four keystrokes to register on screen. The non-keyboard functions, such as menu, input, etc., located on the other side, are far more responsive.
I don’t care, but some may view the 70’s lack of 3D as a downside. I personally view it as a revelation.

Competition and Comparison
Well, there is no shortage of big HDTVs out there and the one that arguably started it all was Sharp. However, I believe, despite the Sharp having CMS and the 70 not, that the Vizio is the better display overall. Not only does it produce a more natural and pleasing image, especially out of the box, it’s more affordable, too. Other competitors include Samsung and LG, but both of their edge-lit designs suffer from poor image uniformity and light leaks; not so with the Vizio E-Series, especially the 60- and 70-inch models that I’ve lived with now for weeks. In my opinion, the E-Series displays may be the best all-round leader and value among edge-lit LED displays available today. For more on these and other LED HDTVs, please visit Home Theater Review’s HDTV page.

Conclusion
I loved the 60-inch E-Series from Vizio and, wouldn’t you know it, I also love the 70-inch version, perhaps more so, for after all, bigger is better. The image quality is unchanged between the two models, which I found shocking, given what I’ve seen from other 70-inch offerings, as they tend to lose ground in the picture quality category as size increases. While it may lack controls for CMS, the truth is that the 70-inch is still a capable performer and one that dishes out a surprisingly accurate and pleasing image, despite being both affordable and from a mass-market consumer brand. To say that Vizio has hit its stride is an understatement, for the company is arguably making the displays that customers truly want and at a price they can actually afford. All I know is I’m sold – and I’m buying.